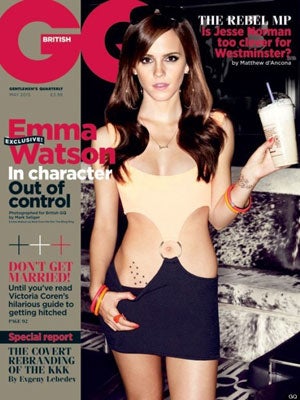 Fact: Emma Watson grew up to be a total babe. Her early days as a frizzy-haired Hermione may not have indicated it to everyone, but there's no doubt that we've watched her blossom into a gorgeous, sophisticated young woman — who also happens to be one hell of an actress.
But despite knowing all of that, her appearance on the May cover of British GQ definitely made us do a double take. Seeing the star in character for her upcoming release, The Bling Ring, is wildly different from anything else we've seen yet. In fact, many an editor has already noted a resemblance to Julia Roberts' Hollywood Boulevard dress from the beginning of Pretty Woman.
Advertisement
But comparisons aside, when we saw this cover photo, we found ourselves reminded of that very memorable, inspiring quote from her Daily Mail interview back in 2009: "What’s sexy about saying, 'I’m here with my boobs out and a short skirt… have a look at everything I’ve got'? My idea of sexy is that less is more. The less you reveal the more people can wonder."
At first blush, this felt like a moment of abandoning that less-is-more ideology. But, we quickly realized that this isn't about her — it's about us.
Because we watch child stars grow up in front of our own eyes, it's sometimes difficult to divorce their actual personalities from their characters, not to mention our own sense of nostalgia. Obviously, Emma wasn't going to be a nine-year-old know-it-all forever. As a grown woman, she's now tasked with approaching her sexuality in a way that feels honest to her, in her work and as an actress in the public eye. She's making a range of decisions on that front, and they're not just limited to this cover. She was a total vixen for Glamour but drew the line at even a rumored role in Fifty Shades. Although this cover, like her upcoming role in Sofia Coppola's new flick, surprised us at first, we're definitely on board now. And we have to give her props. How about you? Do you think she's doing a good job navigating the transition from beloved child star to a well-rounded adult actress?
The issue hits newsstands April 4, so be sure to pick it up to see the rest of the portfolio, and read the interview.