Skip navigation!
Story from Entertainment News
UPDATE: Well, we can finally put the Tonight Show saga to bed. Jay Leno has confirmed his departure from the late-night TV show, ending his 22-year run in spring 2014. Leno had some encouraging words for his replacement, Jimmy Fallon: "Congratulations Jimmy. I hope you're as lucky as me and hold on to the job until you're the old guy. If you need me, I'll be at the garage." The show will return to its roots in New York at 30 Rock studios, along with a host of other changes. Fingers crossed Liz Lemon will make an appearance or two... (CNN)
Advertisement
UPDATE: Looks like the Tonight Show tale is gossip no more — The New York Times reports that Jimmy Fallon will replace Jay Leno in the fall of 2014. The oust will also move the talk show back to NYC for the first time since 1972. The official announcement is expected at the May upfronts, so until then we'll just have to go by Leno's not-so-subtle monologue jabs. (People)
The Tonight Show has been riddled with drama (pun intended) ever since the great Conan debacle that de-throned the comedian from the NBC network. But now could Jay Leno be getting shown the door, too? It's just gossip, but sources say Leno could be ousted in favor of Jimmy Fallon, who appeals to a younger demographic that still seems just out of Leno's reach. Though a Leno rep says “We do not speculate on rumor,” it's likely we'll need to wait it out until summer '14, when the transition is said to take place. What do you think: Would you want to see Fallon take on Tonight? Who else would be a perfect fit? Tell us in the comments below. (Celebitchy) 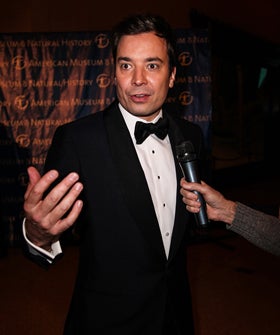