Skip navigation!
Story from Celebrity Style
How can you tell if an on-again, off-again A-list couple is on the mend? Well, for Robert Pattinson and Kristen Stewart, it means braving crowds for weekly karaoke night and posing for photos with fans at a local dive bar. Apparently, Facebook status updates are only for us regular folk!
The pair would've flown under the radar at Ye Rustic Inn, had it not been for Lany Morrison: A Twi-hard with enough courage to coax the normally low-key duo to flash their pearly whites (or, in RPatz's case, muster up a mousy grin). We all know a picture's worth a thousand words — and that makes the story behind this shot a good one. According to Morrison, Rob was clowning around with the photog, turning his back on the lens — a move KStew was not fond of. She allegedly scolded her beau, telling him to stop being "such an asshole." She even drove the point home by apologizing, saying: "Sorry he’s being an asshole," and was nothing but cooperative (whether that's a peace sign or inappropriate gesture she's flashing is up for debate).
Advertisement
Ah, to be young and in love! (Hollywood Life) 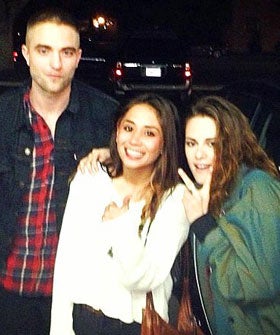 Advertisement
Models
Paloma Elsesser Is Just Getting Started
Paloma Elsesser is having one hell of a month. It started with Copenhagen Fashion Week, where the 27-year-old model walked in Ganni’s now-viral fall ‘2
by Eliza Huber
unstyled
Get Ready, Because Jane Fonda’s Latest Act Is Already Her Biggest...
Jane Fonda, the two-time Oscar winner, fitness empire entrepreneur, multi-bestselling author, and producer has been upending convention for the past six de
by Cait Munro
Style
The Jewelry That Deserved A Closer Look From Last Night’s O...
by Sara Radin
Celebrity Style
Billie Eilish Made A Case For Wearing Plush Leisure Suits Out Of ...
Billie Eilish, winner of five Grammy awards and lover of slime green, made an unexpectedly understated appearance at the Oscars last night that she attende
by Sara Radin
Fashion
Diane Keaton’s Oscars Look Thinks A Long Walk Around The Pa...
Diane Keaton’s on-screen looks are legendary. She wore menswear with ease for her role as Annie Hall in 1977, made the turtleneck-and-pantsuit a decade-l
by Eliza Huber
Oscars
The Ultimate Fashion Guide To The Oscars Red Carpet
by Eliza Huber
Fashion
We Happen To Love Kristen Wiig’s Red Carpet Lasagna Dress
Our favorite funny woman Kristen Wiig is usually noticed for her monotone quips and impressions of Target check-out cashiers. But, at the 2020 Oscars red c
by Leora Yashari
Fashion
The Secret Meaning Behind Natalie Portman’s Red Carpet Cape
Natalie Portman has been a long-time spokesperson for Dior, often showing up on red carpets wearing beautiful duds by the esteemed luxury house. For the 92
by Sara Radin
Fashion
The Cast Of Little Women Stunned On The Oscars Red Carpet
by Sara Radin
Fashion
Janelle Monáe Steals The Red Carpet Show Wearing A Sparkly Hood D...
Little red riding who? Janelle Monae, the ultimate multi-hyphenate and a 2020 Academy Awards performer, appeared on the Oscars’ red carpet in a head-to-t
by Sara Radin
Celebrity Style
6.8 Million People Love Celeste Barber & Here’s Why
To follow Celeste Barber on Instagram — as 6.8 million people including Gwyneth Paltrow and Tom Ford currently do — is to love her. The Australian come
by Cait Munro
Fashion News
Nancy Pelosi’s Impeachment Pin Is Back
Update: Last night’s State of the Union Address had its fair share of viral moments. Democratic women arrived clad in all-white as an act of defiance
by Channing Hargrove
Discover
R29 Stories & News
Watch
R29 Original Series & Films
Shop
R29's Most Wanted