Skip navigation!
Story from Designers
In what may be the most refreshing news of the week (and yes, for the record, it's Monday), Isabel Marant let the world know that she designs for nobody but herself. The French designer who has become the master of effortless cool and casual chic, as well as the momma of the sneaker wedge, tells Telegraph UK, "It's true that I am my own muse."
As the story reports, the Marant headquarters itself acts as a source of inspiration, as it's filled to the brim with "cool women." This internal bevy of style stars may also be what dictates the brand's appeal, dressed in clothing that's womanly, comfortable, and appropriate for knocking everything off their to-do list, yet remaining chic.
Advertisement
Marant also touches on a bit of controversy in the Telegraph report, as she addresses her frustration over the popularity of the sneaker wedges that once were solely attributed to her, (but soon blew up once spotted on every editor and fashion blogger on the web). "As soon as you have an idea, it's copied and you don't like it in a minute," she also states in regard to the interweb's effect on the fashion industry. But with Marant's designs coming from such an honest and instinctual place we're sure she has nothing to worry about. Read more of Marant's feedback on the fashion industry, and why she once claimed that "fashion was all that I hated" (granted, she was 15) in the link ahead. (Telegraph UK) 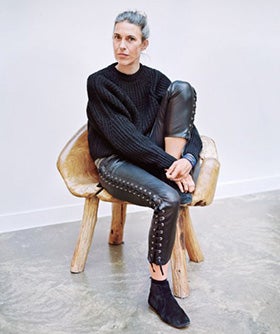 Style
Costume Institute’s New Exhibit Highlights American Fashion’s Ove...
What is American fashion? A little less than a year ago, the Metropolitan Museum of Art’s Costume Institute began to answer this question with the “In
by Irina Grechko
Best Wedding Dresses
Meet The Bridal Designers Behind Some Of Today’s Coolest We...
Welcome to Aisle Style, a week-long series that features the most untraditional wedding fashion trends, bridal designers behind the coolest wedding lo
by Fawnia Soo Hoo
Designer Collaborations
Iris Apfel x H&M Is Here — Here’s How The Style Icon Wants You To...
by Irina Grechko
Advertisement
Designers
Alexander McQueen Returned To NYC After 20 Years With A Nature-In...
There was a lot of talk about mushrooms ahead of the Alexander McQueen Fall 2022 fashion show. As soon as teasers began to quite literally sprout in the fo
by Irina Grechko
Black History Month 2022
Ruth E. Carter Is Black History, Present, And Future
R29Unbothered continues its look at Black culture’s tangled history of Black identity, style, and contributions to the culture with ROOTS, our annual Bla
by Venesa Coger
Adidas
Gucci’s Latest Collection Includes A Collab With Adidas
After months of rumors, Gucci confirmed that it’s partnering with Adidas with the release of the brand’s fall 2022 collection during Milan Fashion Week
by Frances Solá-Sant...
Designers
Y2K Fashion Defined 2021 — 10 Brands That Led The Charge
by Shelby Ying Hyde
Designers
Virgil Abloh Is A Reminder That Fashion’s Most Prolific Designers...
Barrier-breaking designer. Genre-bending artist. Visionary. These are some of the ways people have described Virgil Abloh after it was announced that the 4
by Irina Grechko
Unbothered
Anifa Mvuemba Took Over D.C. With Hanifa’s First Runway Show & Sh...
Designer Anifa Mvuemba is known for her beloved brand, Hanifa, which is full of vibrant and bold colored designs. On Tuesday (Nov 16), she debuted her firs
by Venesa Coger
Designers
Bottega Veneta Green Was Fashion’s Favorite Color. What Hap...
It was the color of the year — at least, it was for fashion types. Few cared about Pantone’s gray and yellow when there was “Bottega Veneta green”
by Katy Kelleher
Designers
Step Inside Susan Alexandra’s Store, A New York Fairytale Come To...
“We wanted it to look like a fairy godmother took her wand and enchanted everything,” says Susan Korn, the creative director and owner of Susan Alexand
by Irina Grechko
Designers
Gucci Writes A Love Letter To Hollywood With A Little Help From S...
When it was revealed that Gucci would be closing down L.A.’s Hollywood Boulevard for its Spring 2022 show — the brand’s first in-person show in almos
by Irina Grechko
Advertisement
Advertisement
Discover
R29 Stories & News
Watch
R29 Original Series & Films
Shop
R29's Most Wanted