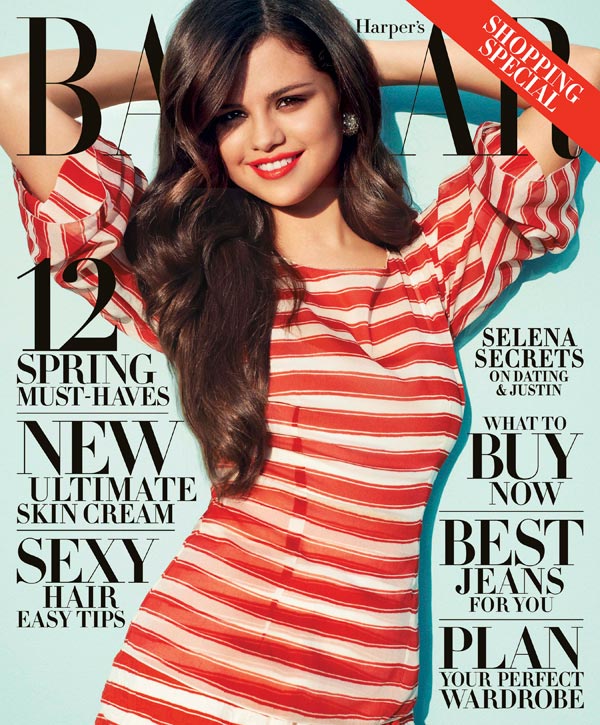 With the upcoming release of Harmony Korine's Spring Breakers, Selena Gomez's PR team is clearly on a rampage to transform this Disney starlet's image from squeaky-clean to sexy and adult in time to make her believable in this very edgy film co-starring James Franco and Vanessa Hudgens, another former Disney kid who's already come a long way in that transitional period.
The latest installment in that endeavor comes in the form of two Harper's Bazaar covers shot by the infamous Terry Richardson. It's not her sexiness that's on display in these two images, but her supposed — and as-yet-unconfirmed — appeal to a more mature audience. Despite covering Glamour and Elle in recent memory, this is her first really credible foray into the distinctly non-tween world of high fashion.
Advertisement
Click through for cover number two, and our thoughts on why this is a bit of an odd move for the magazine... 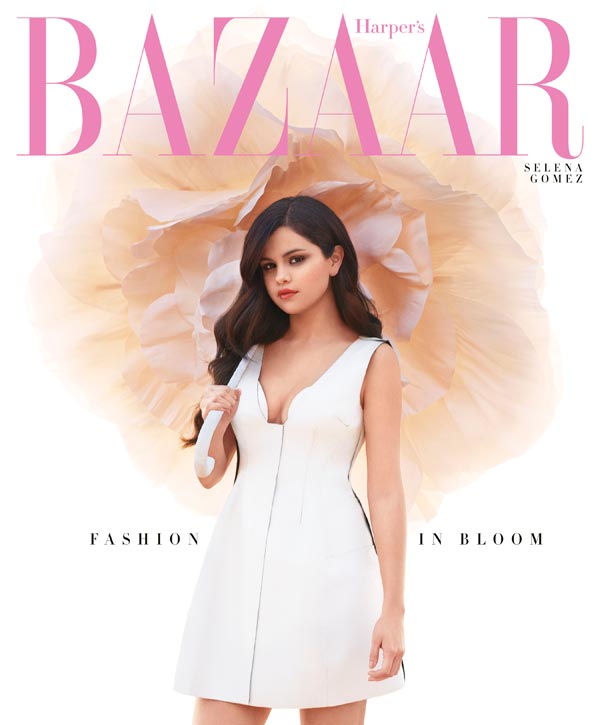 Harper's Bazaar is about as grown-up as it gets when it comes to mainstream-fashion glossies. According to this media kit, the median age of its audience is 38 years old, and while 42% of readers share 20-year-old Selena's 18-34 age group, 43% are 35-54. We're not saying these women are too old to appreciate Selena Gomez — most magazine cover stars are in their twenties anyways, so her presence isn't an anomaly in that respect. We'd just argue that it's a little too soon. At what point is she supposed to have suddenly graduated from Disney to high-caliber acting and creative work? We have no reason to doubt her upcoming performance in Spring Breakers, but maybe it would make more sense to see her on the cover after she's made her debut into more serious acting with that project.
As an office full of Bazaar fans of varying ages, we're not so sure this is the right star for this readership. That's not a statement about Selena's talents or abilities, and maybe we're not giving the power of youth enough credit here. Maybe the masthead wants to shift the audience towards a younger group (though, that also means a drop in readers' average household income, and thus less bread and butter from luxury advertisers). But this still feels like an odd, out-of-context pairing — and the blunt, ill-placed reference to "Justin" on the cover (you know who they mean) only reinforces that Mr. Bieber, for one, has made no effort to move away from his very youthful audience...but that hasn't stopped him from nabbing some prime cover space, either.
Photo: Terry Richardson/Courtesy of Harper's Bazaar.
Style
According To Bridgerton’s Nicola Coughlan, Kim Karda...
On Tuesday, Nicola Coughlan, aka Bridgerton’s Penelope Featherington, took to Twitter to let one of the show’s self-proclaimed fans in on a secret: “
by Eliza Huber
Style
Rihanna’s Latest Look Proves You Can Wear Lingerie Outside
As if to calm our Monday blues, Rihanna stepped out for dinner at Wally’s in Beverly Hills on Monday night wearing yet another top-tier ‘fit, this time
by Eliza Huber
Style
Anya Taylor-Joy Channeled Emma In This Two-Piece Version O...
This weekend, while out celebrating her 25th birthday in New York City, Emma star Anya Taylor-Joy channeled her on-screen persona by donning a puff-sleeved
by Eliza Huber
Advertisement
Style
Kate Middleton’s Jewelry At Prince Philip’s Funeral Honored The Q...
On Saturday, the Royal Family came together at St. George’s Chapel at Windsor Castle for the funeral of the Duke of Edinburgh, Prince Philip, who died on
by Eliza Huber
Style
According To Rihanna, Heeled Flip-Flops Are Making A Comeback
Over the past few weeks, Rihanna has convinced everyone they need a leather blazer, sheer pants, and bangs. Now it’s time to add high-heeled flip-flo
by Shannon Carlin
Style
Dua Lipa’s Latest Look Is An On-Trend Alternative To The Sw...
You want new fashion rules? Dua Lipa’s got ’em. One: thrift a vest. The “New Rules” singer debuted a new outfit on Instagram, makin
by Shannon Carlin
Style
Zoë Kravitz’s Cottagecore Dress Is From Instagram’s F...
And the cottagecore trend continues… On Monday, Zoë Kravitz shared a glimpse of her morning routine with her 6.1 million Instagram followers, which incl
by Eliza Huber
Style
Paloma Elsesser Brought Back Aaliyah’s Dress From The 2000 ...
This weekend, Paloma Elsesser got dressed up to celebrate the wedding of actress and producer Tiffany Lighty and skateboarder Nick Katz. For the outdoor ce
by Eliza Huber
Style
Phoebe Dynevor Traded Bridgerton Pastels For A Puff-Sleeve...
On Sunday, the buzziest names in TV and film gathered — some via Zoom, some in-person — at London’s Royal Albert Hall for the British Academy of
by Eliza Huber
Style
How Lady Gaga’s House Of Gucci Wedding Dress Compares To T...
Just when we thought the fashion in Ridley Scott’s upcoming film House of Gucci couldn’t get any better — think: Adam Driver as Gucci heir, Maurizio
by Eliza Huber
Style
Ashley Graham’s Outfit Makes A Case For Wearing Bike Shorts With ...
On Wednesday, Ashley Graham took a break from what appeared to be a fitting to snap a few mirror selfies and show off her look. For the occasion, the model
by Eliza Huber
Style
Sophie Turner’s Latest Look Is On-Trend & Vacation-Ready
On Tuesday, Sophie Turner spent her afternoon basking in the sun, listening to Taylor Swift’s “Mr. Perfectly Fine” (to husband Joe Jonas’ dismay, w
by Eliza Huber
Advertisement
Advertisement
Discover
R29 Stories & News
Watch
R29 Original Series & Films
Shop
R29's Most Wanted