Skip navigation!
Story from Celebrity Style
We get it. Borrowing clothes can help cement the most sacred of relationships — and ensure your outfit is as good as it can get. And inter-gender swapping isn't new, either: Robert Pattinson and Kristen Stewart share clothes, and Kanye West just sometimes likes his Céline in womens, too. So, when we noticed that Harry Styles might be borrowing his mum's shirt, it's clear the pop heartthrob has some precedent.
While out celebrating his birthday this weekend (19, gals!), Grazia reported on an eagle-eyed Twitter fan who noticed that Harry wasn't just rocking a fresh-off-the-runway Burberry Prorsum shirt, but a shirt his mother has already been spotted in. Though she wore it first, it is a mens shirt, and it might be safe to say that mum Anne Cox might have borrowed it from her son. Either way, this inter-generational Burberry shirt-sharing has put hearts in our eyes. 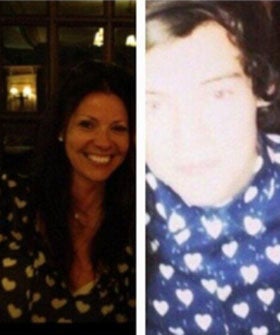 Photo: Via Burberry Prorsum and Twitter/OneDream1D___

Fashion
Katie Holmes Wore A $50 Crochet Top & It’s Still Available
The spring of crochet continues. This time, it’s Katie Holmes making a case for the grandma-chic trend. On Thursday, the actress stepped out in a brown,
by Frances Solá-Sant...
Celebrity Style
Jill Biden And Kate Middleton Matched In Pink For Their First Mee...
On Wednesdays Fridays, we wear pink. Or at least that’s the fashion memo coming from this morning’s meeting between First Lady Jill Biden and Duchess o
by Frances Solá-Sant...
Style
Ariana Grande Just Wore Not One, But Two Viral TikTok Brands
Goodbye oversized hoodies and thigh-high boots, hello TikTok fashion. On Wednesday, newly married Ariana Grande posted outtakes from NBC’s The Voice to h
by Eliza Huber
Advertisement
Style
Emily Ratajkowski’s Vacation Wardrobe Is Peak Mermaidcore
As you might know from this week’s baby-holding investigation, Emily Ratajkowski is on vacation for her 30th birthday. For the celebration, which appears
by Eliza Huber
Style
Sophie Turner Wore Designer Gym Shorts With This Summer’s T...
Three days after debuting her return to Sansa Stark’s red locks on Instagram, Game of Thrones star Sophie Turner is back on the platform with a new (fash
by Eliza Huber
Celebrity Style
Megan Thee Stallion Gave The Tarzan Bikini Trend Her Stamp Of App...
It’s about to be another hot girl summer. And Megan Thee Stallion is celebrating by wearing one of 2021’s biggest fashion trends: the Tarzan bikini, a
by Frances Solá-Sant...
Style
This Savage x Fenty Model Is An Expert In Styling String Bikinis ...
by Eliza Huber
Style
Beyonce’s Courtside Look Was Peak Party Fashion
On Saturday, Beyoncé and Jay Z watched the Nets beat the Milwaukee Bucks at Barclays Center in Brooklyn. Naturally, the “Lemonade” singer dressed for
by Eliza Huber
Celebrity Style
Gigi Hadid’s Crochet Top Is On-Trend & Still Available For $60
Crochet fashion is no longer reserved for your grandmother’s closet, and Gigi Hadid’s latest outfit is clear evidence. Over the weekend, the supermodel
by Frances Solá-Sant...
Celebrity Style
Riley Keough’s Latest Look Proves You Can Wear Pajamas To Work
It’s hard to imagine a world with office dress codes after more than a year of working from home in pajamas, athleisure, or your middle school field day
by Frances Solá-Sant...
Style
Statement Sleeves Were The Biggest (& Most Dramatic) Red Carpet ...
On Sunday, British television’s buzziest stars, including The Crown’s Helena Bonham Carter and Killing Eve’s Jodie Comer, came together at London
by Eliza Huber
Style
Dua Lipa Paired A Zebra Bikini With A Cowboy Hat In Her “Love Aga...
The popularity of Western tropes in fashion isn’t new. Quite the opposite actually — Americana signatures like cowboy boots, double-denim, and more hav
by Eliza Huber
Advertisement
Advertisement
Discover
R29 Stories & News
Watch
R29 Original Series & Films
Shop
R29's Most Wanted