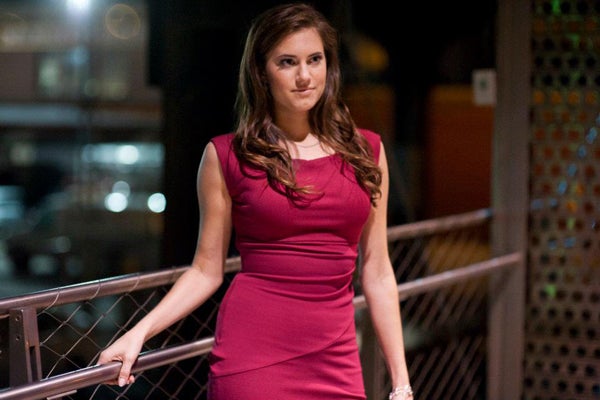 Before Allison Williams was Marnie on HBO's Girls, she was covering Ke$ha on YouTube and mocking Kate Middleton on Funny or Die. Of course, her role in Lena Dunham's controversial show has sky-rocketed Williams to fame (Fun fact: It's her first proper acting gig). And, if you haven't read the endless articles tackling the subject, the show's rife with honest and often uncomfortable sex scenes and on-screen nudity (writer/director Dunham being the principal volunteer). Yet, before the first season premiered last year, GQ asked Williams whether or not she'll get naked. She replied, "I would prefer to keep my clothes on. Unless there's a brisk breeze or something, I tend to keep them on." Looks like that was one resolution she didn't feel the need to keep —this season, we're seeing Williams' character break out of her uptight shell and shedding clothes like there's a major wind chill.
The change of heart has led to some, uh, awkward questions: When Williams made a guest appearance on Chelsea Lately, host Chelsea Handler asked the actress whether her father, NBC news anchor father Brian Williams, watches his daughter's (more frequent) sex scenes. According to Williams junior, Dad not only watches them, but she watches them with him. Apparently, guiding Bri through the whole filming process lessens the "weirdness" that comes with seeing his daughter naked on screen. We have to hand Allison the ballsiness award here — It's one thing to have the confidence to do a sex scene, it's another to watch it with Pop, too. (Huffington Post)

Style
31 Looks To Jumpstart Your Summer Style
by Eliza Huber
Style
27 Black Influencers That You Should Be Following
by Eliza Huber
Style
Sophia Bush Is Selling A Look From One Of Her “Absolute Fav...
Like many of us, Sophia Bush is using her free time in quarantine to Marie Kondo her wardrobe, but, unlike the items gathering dust in the back of our clos
by Eliza Huber
Style
Hailey Bieber’s Reformation Dress Is Perfect For Summer — &...
This year Memorial Day Weekend wasn’t all parades and barbecues like we’re used to, but, even with the change of plans, Hailey Bieber found not one, bu
by Eliza Huber
Style
Here’s What Your Favorite Celebrities Wore During Memorial ...
by Eliza Huber
Style
7 Meghan Markle-Approved Fashion Brands That Are Also Affordable
by Eliza Huber
Style
Olsen Twin Sets The Bar For Social Distancing Style
From their pastel-colored lenses and bandanas circa 2000 to the black shapeless frocks they’re known for today, the Olsen twins have been our style icons
by Eliza Huber
Style
Meghan Markle’s Go-To Dress Is 50% Off At Nordstrom
We’ve learned every TikTok dance, box-dyed our hair pastel pink, and watched all 12 episodes of Normal People — twice. Next on our list of distractions
by Eliza Huber
Fashion
Villanelle Is A Carrie Bradshaw For Our Disillusioned Generation
Sex and the City’s Carrie Bradshaw walked so Killing Eve’s Villanelle could run. Sure, Bradshaw can be considered a predecessor to many of TV’s antih
by Cait Munro
Style
Meghan Markle Just Gave This ‘90s Jewelry Trend Her Stamp Of Appr...
Summer is almost here, and with it, comes all of our favorite kitschy, nostalgic accessory trends: seashell jewelry, fruit-shaped handbags, rhinestone-crus
by Eliza Huber
Style
Here’s What You Would’ve Seen On The Met Gala Red Carpet Last Night
by Eliza Huber
Celebrity Style
Meghan Markle’s Baseball Cap Marks The Beginning Of A New Era
It’s only been a month since Meghan Markle and Prince Harry swapped out their Sussex digs for a house in the Hollywood Hills, but they already look like
by Eliza Huber
Discover
R29 Stories & News
Watch
R29 Original Series & Films
Shop
R29's Most Wanted