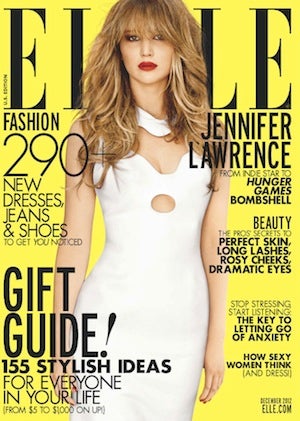 With a slew of glossy covers under her belt (check 'em out here, here, and here!), Jennifer Lawrence is pretty much a pro at posing at this point. But, unlike most Hollywood PYTs, it's her interviews that steal the show. Between her straight-up honesty and lack of a filter, we're always snagging whatever mag she's gracing this month, and Elle's December issue is no exception.
Clad in a curve-hugging LWD (courtesy of Balenciaga), Lawrence looks nothing short of a bona fide bombshell. But, once you get past the cut-outs and fringe bangs, readers will quickly realize that the 22-year-old isn't just a pretty face. Actually, critics have been known to attack her weight, going as far as to call the Hunger Games actress "too womanly." And, rather than succumb and shed the pounds, Lawrence is determined to promote a healthy body image for young fans (à la Melissa McCarthy!), and revealed: "I eat like a caveman, I'll be the only actress who doesn't have anorexia rumors. In Hollywood, I'm obese. I'm considered a fat actress." She goes on to compare herself to Val Kilmer, and claims she will never starve herself for a role, fearing that girls would start skipping dinner to look more like Katniss.
Props to Lawrence for not taking Tinseltown's BS to heart — heck, we wish more folks had that same mindset! We just hope this new fashion darling is in it for the long haul. (Styleite)