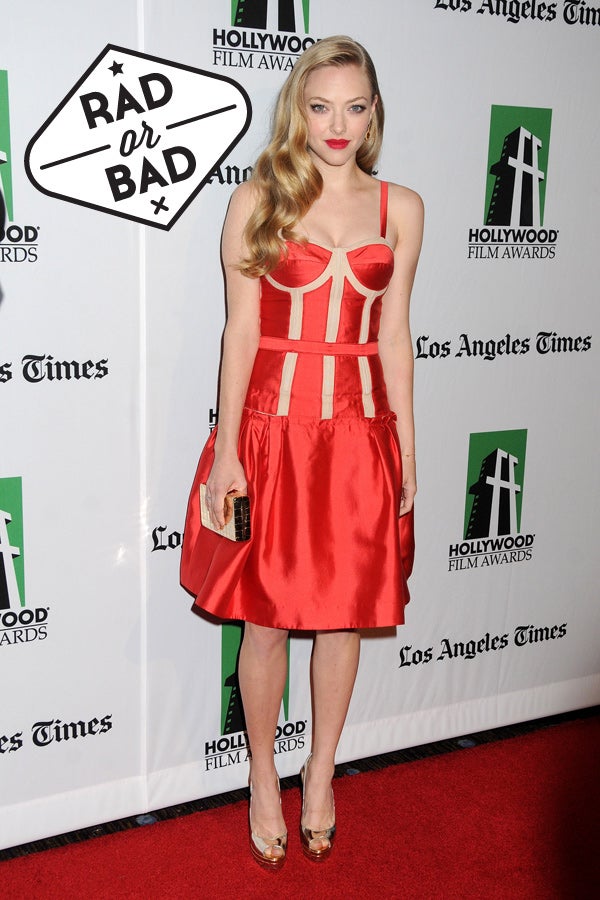 If there's one thing Amanda Seyfried hates, it's a boring red-carpet look. Whether it's a turquoise tuxedo or bright orange accessories, it seems like no color or style is off limits for the Les Misérables star. And, as you can imagine, last night was no exception!
Clad in a Prabal Gurung creation (wonder if she'll pick up the new Target collab?), the actress arrived at last night's 2012 Hollywood Film Awards in Beverly Hills in true Seyfried form. Her sartorial selection for the event had many guests swooning — it takes a special someone to pull off a frock that features an exposed corset, drop waist, and flared skirt. We were, however, left wondering what had happened to the caplet we spotted in the designer's lookbook. It was a brisk night by L.A. standards, and we bet she would've earned high fashion marks had she opted for the offbeat outerwear.
We do have to admit, whatever she was lacking in the layering department she made up for in beauty — have you seen a more flawless side-swept 'do and cat eye? We're going to go ahead and assume not. Where do you stand — are you digging Seyfried's unpredictable style as of late, or is the guessing game getting a bit old?