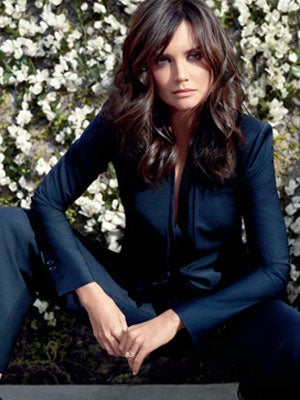 Call it wild speculation, but when Katie Holmes goes to the same store four times a week in the most photographed period of her (or anyone's) life, we start to wonder. She's been a loyal fan of the brand since her Dawson's Creek days, and she's basically the epitome of J.Crew's clean, uptown, stylish-but-not-too-trendy aesthetic. The newly single star also brought Suri along on her various outings, leading many media outlets to speculate that the pair is gearing up for a mother-daughter catalogue. Whatever the reason for her many visits, Katie's Ann Taylor ad campaigns are over, so she's free to take on a new project.
Advertisement
J.Crew reps insist that they are not working with Holmes in any formal capacity, but that leaves a lot of wriggle room. Maybe that's a lie. Maybe they're paying her to show up at the store (because we're pretty sure her every move is carefully calculated these days). Maybe, just maybe, she's working on a super-secret Holmes & Yang x J.Crew capsule collection. Fingers crossed for the latter. (WWD)
What do you think – silly rumor or the seeds of truth?