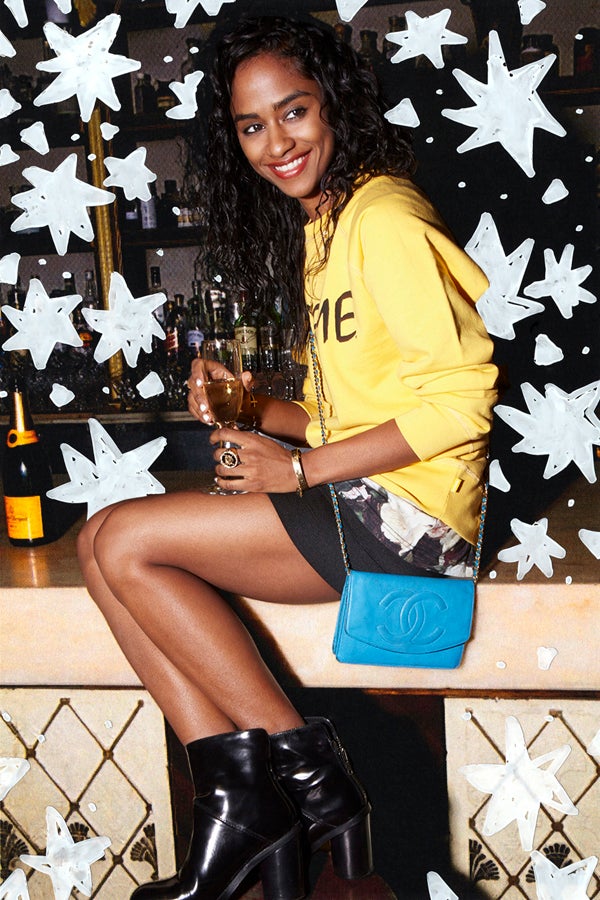 Vashtie Kola, DJ, Producer, Creative Consultant, Party Promoter, and Designer
There’s more than a few reasons why Vashtie Kola — or Va$htie, if you will — can legitimately claim the title, “Downtown’s Sweetheart”. First, she’s an accomplished director with videos for Common, Solange, Justin Bieber, KiD CuDi, and many others in the can. Secondly, she’s a true NYC polymath having worked in creative direction for major brands and record labels, founded her own clothing line, VIOLETTE, and launched one of our favorite regular dance nights, ever, the 1992 Party. And finally — well, just look at her. If downtown were to have a sweetheart, she would look, dress, and dance exactly like Va$htie. It was our true pleasure to spend a few moments with one of our favorite people in the city and talk about how her early days in Albany influenced who she is now, the foundation of the 1992 Party, and her favorite tracks.
Advertisement
We've known you so long, it's like you're a part of the city. But what were you like as a kid?
"I grew up in the hood in downtown Albany. I was bullied for being 'weird' at a time when being different was not cool. The other kids told me I was 'acting white' because I liked to skateboard, wear vintage clothes, and listen to different kinds of music. Then, I received a scholarship to a prestigious all-girls high school and most of them found me, 'too black'!"
Rough.
"Well, I ended up finding a crew of great friends that understood me. After high school, I spent most of my time hanging out in our downtown park (Washington Park) where misfit kids from all areas came to skate, escape their home life, or just socialize. I had an after-school job working at a Tattoo Shop (Lark Tattoo), so you can imagine I was surrounded by an eclectic mix of people. I preferred it that way; being around the same kind of people didn't appeal to me. I was interested in many different worlds..."
Is that what drew you to New York nightlife?
"I grew up drooling over it! I had an older gay brother who would trek down to the city from Albany and go to raves and hang out at the Limelight. When he'd come back he'd pour out all his stories about club kids and and play me house music, I was in awe. Naturally, I became involved in the scene after moving here although the transition was an unexpected one. What actually brought me to New York City was film school, I studied and soon after graduation started directing music videos for artists.”
Advertisement
So then, how did you get into DJing and all the other things you do?
“As all NYC residents know, we're constantly hustling and pursuing other interests. Sometimes, you end up juggling a few gigs.”
And the 1992 Party?
“Basically, in 2006, after years of attending the many parties New York City had to offer (album release parties, fashion week parties, etc.) my friend Oscar Sanchez and I became bored. We were tired of hearing top-40 hits and going to clubs and parties that made us feel…inferior. So, we had an idea; a party that played our favorite music from our favorite era (the late 80's/early 90's) with an open-door policy for anyone who wanted to attend. And so,1992 The Party was born!”
Some people might say that what you do is just a non-stop party? Do you think that's true?
"Well, it's not back-breaking work it, but has it's downsides. I'm naturally not a party girl."
Really? Then what's a good night off for you?
"Sweatpants, my couch, a couple of great friends, my Russian Blue cat Vladimir and DVR'ed episodes of Dateline, The Simpsons, Antiques Roadshow and 30 Rock."
We're right there with you.

Photographed at Apotheke, 9 Doyers Street; 212-406-0400.
Unbothered
What Black Creators Can Learn From Signed, Blake
S
by Venesa Coger
Style
This Reformation Dress Sold Out After Taylor Swift’s TikTok Debut...
Taylor Swift made her TikTok debut on Monday in a big way. First, she announced that Red (Taylor’s Version), the re-released edition of her 2012 album Re
by Eliza Huber
Style
Zoë Kravitz Wore The Perfect Summer Dress — & Yes, It’s Still Ava...
If you spent the entire weekend thinking about Zoë Kravitz and Channing Tatum’s rumored relationship after the two were spotted sipping iced coffees tog
by Eliza Huber
Advertisement
Beyonce
Beyoncé Channeled Audrey Hepburn In A 128-Carat Diamond Necklace
One of Breakfast at Tiffany’s most memorable scenes features Holly Golightly (Audrey Hepburn) singing Henry Mancini’s “Moon River” while strumming
by Frances Solá-Sant...
Style
Katie Holmes’ Latest Look Includes A J.Lo-Approved Quarantine War...
Like us, Katie Holmes wants to dress like J.Lo. This week, the Dawson’s Creek alum was spotted strolling through downtown Manhattan, wearing a black Cham
by Eliza Huber
Engagement Rings
We Finally Caught A Glimpse Of Sophia Bush’s Square-Cut Eng...
It’s been a week since Sophia Bush made her engagement to entrepreneur Grant Hughes Instagram official. Now, she’s showing off her ring.  On Tuesd
by Frances Solá-Sant...
Style
Rihanna Wore Ripped Low-Rise Jeans With Pearls At The Supermarket
Now this is a billion-dollar look. On Sunday, Rihanna was spotted leaving her local New York City Whole Foods wearing the ultimate high-low ensemble. On th
by Eliza Huber
Style
Megan Fox Wore A Pin Top With Summer’s Most Ubiquitous Trend
With stamps of approval already pressed and sealed from Bella Hadid, Hailey Bieber, and Ariana Grande, it was only a matter of time before another celebrit
by Eliza Huber
Style
Rihanna Wore TikTok’s Favorite Going-Out Top With Low-Rise ...
Rarely does Rihanna succumb to fads, likely because she’s often the one starting them. Yet, the billionaire fashion-beauty mogul’s latest look featured
by Eliza Huber
Unbothered
Ciara On Being A Mom, A Mogul & Married To Russell Wilson: “It’s ...
As the world slowly reopens, it’s no secret that everyone has been struggling to figure out how to live in this (almost) post-pandemic reality and get ba
by Maiya Carmichael
Beyonce
Beyoncé’s Harper’s Bazaar September Cover Is A Tribute To ...
Less than a week after releasing a cowboy-inspired campaign for her athleisure line Ivy Park, Beyoncé now graces the three cover versions of Harper’s Ba
by Frances Solá-Sant...
Celebrity Style
Meghan Markle Wore The Perfect Work-From-Home Outfit
Meghan Markle seems to have a solution to the work-from-home outfit struggle we’ve all endured for the past year.  On Wednesday, the Duchess of Suss
by Frances Solá-Sant...
Advertisement
Advertisement
Discover
R29 Stories & News
Watch
R29 Original Series & Films
Shop
R29's Most Wanted