With
My Week With Marilyn
,
Smash
, a new Marilyn-inspired makeup collection from MAC, the David Wills book, Marilyn Monroe: Metamorphosis, and the 50th anniversary of her death coming up in August, Marilyn mania seems to be reaching a fever pitch.

And now, a new TV show promises to continue the national obsession with a search for the real-life, modern-day version of the iconic blonde. Produced by eOne Television, in conjunction with her estate, the competition reality show will follow twelve contestants in their quest to be Hollywood's next It Girl. Considering Marilyn's now widely known troubles, her somewhat anti-modern and -feminist philosophy, and her singular, easy-to-emulate-but-impossible-to-replicate style, it seems almost in bad taste for this show to exist. But hey — it's reality TV. Bad taste is probably a given.
(Jezebel) 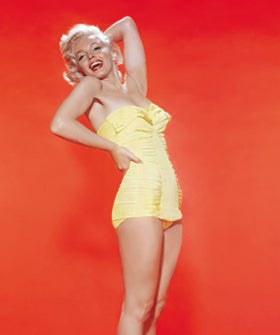 Best of Netflix
There’s More To The End of Ginny & Georgia Season 1 ...
Warning: Spoilers for Ginny & Georgia season 1 are ahead. Things are left on a precarious note at the end of Ginny & Georgia‘s first season.
by Martha Sorren
Pop Culture
This New 17-Minute Interview Shows The Real Prince Harry — & We’r...
For those of us who weren’t as up on the goings on of the British royal family, Prince Harry seemed like this nebulous entity — he exuded the vibe
by Natalie Morin
Entertainment
Prince Harry Is More Comfortable With The Crown Than Royal...
Since its 2016 debut on Netflix, historical drama The Crown has peeled back the layers of The Firm to provides fans a more solid idea of the inner workings
by Ineye Komonibo
Pop Culture
Is Emma Watson Retiring From Acting?
Update February 26, 2021: Don’t bury your wands and robes just yet. (Sorry, had to). Emma Watson’s manager Jason Weinberg put fans’ minds
by Natalie Morin
TV Shows
This Is What That WandaVision Post-Credits Scene Means For...
Warning: The most major spoilers ahead for WandaVision’s eighth episode, “Previously On.” This time last week, I had never watched WandaVision. Then
by Ariana Romero
Movies
Andra Day Was “Terrified” Of The Nudity In The United States ...
Andra Day wasn’t an obvious choice to play Billie Holiday. Despite being an established singer herself, Day had to convince director Lee Daniels that she
by Anne Cohen
Movies
The 17 Movies You Have To Watch Before The Golden Globes — & Wher...
by Anne Cohen
Best of Netflix
Everyone Is At Home Watching These 10 Shows & Movies On Netflix R...
by Ineye Komonibo
Somos Latinx
Here’s Who Really Walked So Bad Bunny & Walter Mercado Cou...
Reigned the most-streamed artist of 2020 and making waves for his latest musical appearance on Saturday Night Live, Bad Bunny has truly navigated what it m
by Katie Coss
TV Shows
Ginny & Georgia’s Ginny Explains The “Surprise” Of The Ser...
Warning: Spoilers ahead for Ginny & Georgia season 1.  “It was bizarre,” Antonia Gentry, star of Netflix’s new Ginny & Georgia, laughed
by Ariana Romero
TV Shows
You Have 7 New Netflix Treats To Binge This Weekend — Here’s What...
by Ariana Romero
Entertainment
Zendaya & Tom Holland Are Done Lying To Us Now
Now that we’re fully in Phase Four of the Marvel Cinematic Universe, the superhero franchise is speeding towards the release of one its first films i
by Ineye Komonibo
Discover
R29 Stories & News
Watch
R29 Original Series & Films
Shop
R29's Most Wanted