Skip navigation!
Story from New York
For so long, we were certain Suri Cruise had every element of an Alexa Chung in the making, but lately she's been walking on an edgier side — the wild side, if you will. Being carried down the street this weekend, Suri rocked a Posh-esque white leopard-print Milly Minis Addison coat with purple leggings and red sparkly flats (a bold pairing, but she makes it work). Also in tow was a large stuffed animal and, of course, her actress-slash-designer-slash-mom, Katie Holmes.
The purple and red, the stuffed animal, and the mom? All are outrageously out-there style choices that point to an early (but not Spice Girls early) Beckham-ista. What are your thoughts? Is Suri going to grow up to be an Alexa Chung-esque brunette beauty, or do you think she'll go the way of VB and design her own line? Either way, we can't wait to see. 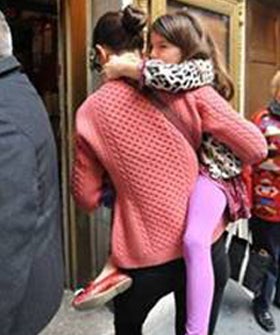 Photo: Courtesy of LaForce and Stevens
Somos Latinx
Dear Miya Ponsetto, You Can Be Latinx & Still Be A Karen
Miya Ponsetto, the white woman dubbed as “SoHo Karen” on social media, was forcibly arrested in California yesterday. Her arrest comes after sh
by Jasely Molina
Food & Drinks
Is A Bagel Really A Bagel If It Isn’t In NYC?
by Elizabeth Buxton
New York
We Dig This NYC Dim Sum
by Camille Coklow
Advertisement
Beauty
The 17 Most Epic NYC Massages
by Kayla Jacobs
Movies
11 Movies Perfect For A Glorious Snow Day
by Vanessa Golembewski
New York
You HAVE To Try The Avocado Toast At These NYC Restaurants
by Elizabeth Buxton
New York
The Absolute Best Spots To Slurp Ramen In NYC
by Zoe Bain
New York
The NYC Rooftops You Need To Hit This Summer
by Elizabeth Buxton
Beauty
The Best Cheap Haircuts In New York City
Choppa style, for cheap.
by Liesa Goins
New York
The Indie Bride-To-Be’s Guide To Dress Shopping In NYC
by Ashley Castanos
New York
Is This Really What The NYPD Thinks About Rape?
NYPD captain Peter Rose has angered rape advocates after saying “acquaintance rape” cases are not as serious as rapes committed by strangers.DN
by Shannon Carlin
US News
Why This New York Subway Mural Of A Gay Couple Is So Important
The New York subway system is making headlines this week, with the opening of its long-awaited Second Avenue line. One of the new stations along that line
by Sabrina Rojas Weiss
Advertisement
Advertisement
Discover
R29 Stories & News
Watch
R29 Original Series & Films
Shop
R29's Most Wanted