Skip navigation!
Story from Fashion
As the first fashion designer to create uniforms for Britain's Olympic and Paralympic teams, Stella McCartney had big expectations to live up to…and dare we say, she filled them? Teaming up with Adidas, McCartney created suits that feature the Union Jack, with each sports team receiving a custom version to suit their individual divisions. And considering how horrifying the volunteer uniforms are for the London 2012 Olympics, we're glad that Britain will have something in the way of eye-candy. Now, Ralph Lauren's Olympics contract is still on-going for 2012... but can he pull it off? If we're allowed to make a suggestion, it's high time for Marc Jacobs to be passed the torch, no? (WWD) 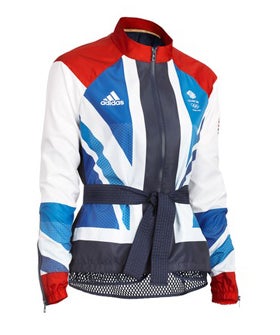 Most Wanted
Athleta Is Slept On & Here’s Why You Should Be Shopping There
Here at R29, we’re all about sharing well-vetted products with you, so I’m here to share some of my personal favorites and some plus-size best sellers
by Chichi Offor
Cool Jewelry
Catbird’s Birth Flower Charms Beat Your Classic Bouquet
You can find NYC-based Catbird‘s delicate pieces the world over, from the halls of Buckingham Palace to the streets of Brooklyn. While it counts Megh
by Amanda Randone
Fashion
The Latest Fringe Trend Is The Most Optimistic — And Fitting — Sp...
The coronavirus pandemic has made us feel stagnant in many ways. The coming and going of new variants and constant threats of yet another lockdown have mad
by Frances Solá-Sant...
Advertisement
Shopping
How HOKAs Became The “It” Sneaker Beloved By Both Mar...
If you’ve spent any time looking at running shoes (or everyday ugly dad sneakers, for that matter), it’s likely that you’ve already come
by Jinnie Lee
Fashion
Kahlana Barfield Brown On Shopping Secondhand & Why Jeans Go With...
Style and beauty expert Kahlana Barfield Brown is an avid thrifter. If you follow her on Instagram, you know that her styling videos and fashion photos oft
by Venesa Coger
Shopping
31 Non-Boring Valentine’s Day Gifts For Your Guy
by Bobby Schuessler
Most Wanted
This Big-Box Shoe Shop Is A Untapped Resource For Classic Sneakers
From running around breathless playing tag during recess to scurrying through huge crowds of people for your first grown-up job, one thing has remained the
by Chichi Offor
DIY
Craft The Winter Days Away With A DIY Kit From Etsy
by Jinnie Lee
Lingerie
Attention, Cuup Cult — These Sheer, Supportive Bras Are On Sale F...
We ask a lot of our undergarments — and finding a good high-quality, supportive, comfortable and sexy bra for less than $50 can seem like an impossible t
by Mercedes Viera
Winter Fashion Guide
Treat Your Lower Half To A Pair Of Cashmere Sweatpants This Winter
by Emily Ruane
Style
Twee Fashion Is Back — Here’s How To Update It For 2022
Indulge us for just one moment and cast your mind back to the early 2010s. You’re heading to Blockbuster to rent 500 Days Of Summer on DVD, bopping away
by Alicia Lansom
Fashion
Secondhand Formalwear Is More Popular Than Ever. Here’s Why
Trisha Bantigue first entered the pageant world in college in hopes of landing scholarship money, after having emancipated herself from her mother. Despite
by Frances Solá-Sant...
Advertisement
Advertisement
Discover
R29 Stories & News
Watch
R29 Original Series & Films
Shop
R29's Most Wanted