Skip navigation!
Story from Entertainment
Today, three members of Russian punk band Pussy Riot were formally charged with "hooliganism driven by religious hatred." The Internet is in an uproar. Musicians and public figures like Madonna and Bjørk have voiced their support of the three girls charged. And, Pussy Riot has captured global interest and fueled international outrage. So, here's why we should care about the three young women who are being jailed in Russia.

Who Is Pussy Riot?
Pussy Riot is not exactly a "band," like the media has suggested. They are more of a performance collective, with between 10-15 members, who stage politically motivated performances and acts of dissension, like kissing uniformed policemen or holding protest concerts. In an interview with the St. Petersburg Times, the collective said that it had been inspired by U.S. band Bikini Kill, saying, "What we have in common is impudence, politically loaded lyrics, the importance of feminist discourse, non-standard female image." The members perform in clashing colored tights and dresses, wearing balaclavas obscuring their face and combat boots, and all of their performances are political in nature, with songs about Vladimir Putin.

What Did They Do?
In February, members of the group staged an impromptu performance inside of Moscow's Christ Savior Cathedral, a Russian Orthodox institution. During the performance, they screamed, "Mother Mary please drive Putin away," before Putin was elected president for the third time. The girls performed and jumping around for about 60 seconds before they were detained, and three girls were arrested: 24-year-old environmentalist and mother Maria Alyokhina, 30-year-old computer programmer and LGBT activist Yekaterina Samutsevich, and 22-year-old philosophy student, artist, and mother Nadezhda Tolokonnikova.

The reaction to the performance, plus the swift and strict seven-year-sentence the girls were facing (it appears that they will only serve two) emphasizes the closeness of church and state in Russia, plus the religious leanings of the court. The prosecution claimed their dances were "devilish," and critics note that the group attacked two of Russia's most prominent pillars: The Church and The Kremlin. 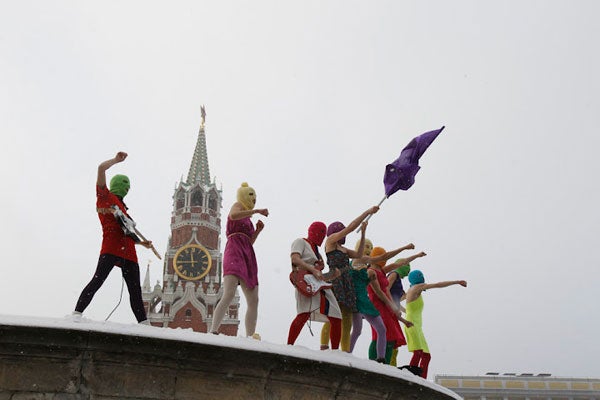 Who Is Involved?
Aside from the three girls who were arrested, outspoken political musicians have consistently made statements. Paul McCartney asked for their freedom, while Bjørk dedicated her song "Declare Independence" to the girls. While in Russia, Madonna spoke out for the trio. According to Wikipedia, basically any band who has ever taken an interest in politics (Beastie Boys, Peaches, Yoko Ono, Pattie Smith, and Rise Against, to name a few) have all spoken out in support of the band.

Advertisement
In the wake of their sentencing, protests and riots are reportedly occurring outside of the courtroom…and at the Russian Embassy in New York City, too.

Why Should We Care?
Suddenly, the words "Pussy Riot" have appeared in headlines from Fox to The Huffington Post (which has, in many ways, indicated that their protest is effective), forcing the world to think about "art collectives" and guerrilla initiatives. The trial, and the subsequent media interest, proves that in a major country that purports to support democracy, freedom of speech can still be systematically denied. This also serves as a reminder that the need for outspoken feminism — and not just in countries where women's rights are outrightly denied — is still vital. Lastly, at least for us, it means that the power of "punk" — DIY projects, activism, and music imbued with politics — is not dead, at all.

Photo: Courtesy of Pussy Riot
Unbothered
And Just Like That… Sex and the City Still Doesn’t D...
Sex and the City is such a pop-culture juggernaut that many Black women can make some reference to it, whether it be a love of the Cosmopolitan, a salute t
by Niki McGloster
Unbothered
Still Missing Insecure? These New Black Shows Will Make It...
by Ineye Komonibo
Unbothered
It’s Time For Black TikTok Creators To Be Paid Their Worth
Forbes recently named TikTok’s top-earning creators, including Charlie and Dixie D’Amelio and Addison Rae.
by Venesa Coger
Advertisement
Dedicated Feature
How Sita Abellan Is Rethinking The Word “Influencer” For Hispanic...
Sita Abellan epitomizes “Jack of all trades.” Throughout the course of the last decade, she’s worked as a model, a designer, an Instagram Personality
by R29 Editors
Unbothered
Station Eleven Can Be A Devastating Watch, But Danielle ...
Welcome to “What’s Good,” a column where we break down what’s soothing, distracting, or just plain good in the streaming world with a “rooting fo
by Kathleen Newman-B...
Book-ish
Books By Black Authors We Can’t Wait To Read In 2022
by Stephanie Long
Unbothered
Quinta Brunson Gets A Gold Star For Abbott Elementary
There are some television shows that, within only a few minutes of watching, you just know will be hits. That magic is hard to explain — there isn’t ex
by Ineye Komonibo
Somos Latinx
Glee’s Santana Lopez Elevated Queer Latina Represe...
Mean cheerleaders have long been staples of teen entertainment. In Glee, it was the self-proclaimed “straight-up bitch” Santana Lopez, played by th
by Gabriela Ramos Ta...
Dedicated Feature
Would You Survive A Scream Movie? Here Are Your Odds, Ba...
January is a time for beginnings: A whole new year stretches ahead, entirely unmarred. We’re all feeling rested, sated, bolstered by family time and extr
by Robert Hickerson
Entertainment
Cheer Season 2 Shows The Dirt Underneath The Pyramid
Minor spoilers ahead. It only takes about five minutes into the season 2 premiere of Netflix’s Cheer to realize that this is going to be a very different
by Katherine Singh
Unbothered
The Official Trailer For The Fresh Prince Reboot Hints At ...
New year, same Hollywood dipping into the archive of beloved shows to reimagine for new audiences. First on 2022’s reboot list is Bel-Air, a darker, more
by Ineye Komonibo
Best of Netflix
Rebelde Made Me Gay (& The Netflix Remake Is Telling Our...
The age-old proverb states: “If you were a little too obsessed with Rebelde as a nine year old, re-watching scenes on YouTube, concerts, and music videos
by Mercedes Viera
Advertisement
Advertisement
Discover
R29 Stories & News
Watch
R29 Original Series & Films
Shop
R29's Most Wanted