Skip navigation!
Story from New York
Some children spend their childhood with an old bath towel tossed over their shoulders and pool goggles over their eyes, pretending to take flight in the back yard (ahem guilty). Others actually get airborne. New York-based photographer Rachel Hulin has chronicled her son jet-setting (literally) over beaches, hotel room beds, and in front of sunny kitchen windows, in a series of whimsical pictures which kind of puts our youthful fantasies of flight to shame. The photos, which Hulin calls "The Flying Series," shows little Henry traversing various terrains in such a weightless and natural way that you can't help but wonder what kind of rigging or juggling went on in order to make these shots look so realistic. But, before you clutch your pearls and get the vapors, don't worry — there was no actual tossing, throwing, or dangling of babies à la Blanket Jackson going on here. As you might have guessed, this magic is due to Photoshop. And although that does kind of take away from the mystique, at least it's not being used in a body-chopping, proportion-disfiguring way. Godspeed, Henry, godspeed. (Design Taxi) 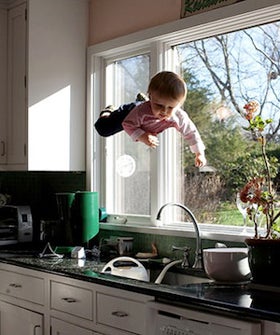