It looks like MK and Ashley have finally grown up, absorbing as much as they could from Tyra Banks's fantasy novel Modelland. Though not quite an autobiography, the book's predictable plot is taken straight out of, yup, you guessed it, Tyra's life. Now that the sisters are "through" reading the 576-page novel written for ages 12 and up, they just couldn't wait to spread the story of Tookie De La Crème (we know, but she's a model guys, not a stripper). Maybe MK and Ashley were rethinking a new career path into commercial modeling and needing a bit of encouragement? Maybe not. The almost pristine, signed copies were donated to
Housing Works
. In it were personalized post-it notes written from Tyra to the twins, signing off with a "smize" (instead of the signature Olsen "prune") and "stay fierce and fabulous." What we would have given to see M-K and Ash's reaction...but seems like they didn't even open the front cover. Uh, would you?

Advertisement
Get your copy (or get the set!) for just $100 (steal!) at Housing Works. (Fashion Week Daily) 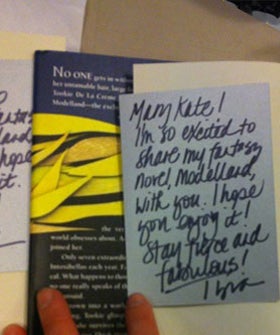