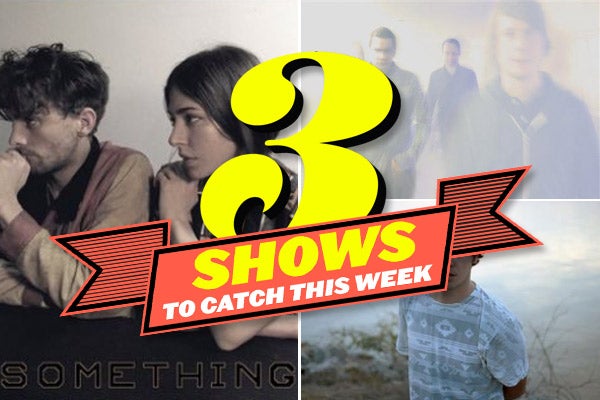 Sigur Rós, Perfume Genius: July 31, Prospect Park Bandshell, $42
This Tuesday’s show for the ongoing Celebrate Brooklyn concert series features angelically-voiced post-rockers Sigur Rós and the heartfelt pop of Perfume Genius (aka Seattle native Mike Hadreas). While Prospect Park may not be the wilds of Iceland, we can't think of a two better bands for relaxing under the stars.

Blood Diamonds, LE1F, Gobby: August 3, Glasslands, $10
We’ve been feeling L.A.-via-Vancouver producer Blood Diamonds’ rave-y jams at Refinery29 for quite some time. And with tracks like the Charli XCX-featuring “Grins” and the recent Grimes-collab “Phone Sex,” it seems like he’s only getting better. Also on the bill is New York rapper LE1F, whose recently-released “Wut” is one of the best tracks this summer.

Advertisement
TV & Netflix
Narcos: Mexico Season 2 Takes Place When A Major Drug Lord...
Warning: slight spoilers for Narcos: Mexico season 2 ahead. While fans might already know where this Netflix series with a location-based title takes place
by Shannon Carlin
TV Shows
The Bachelor Pulled A Fantasy Suite Surprise Twist & The...
Once again, the Bachelor producers are interfering with Peter Weber’s season for the sake of drama — and this time, his three finalists are not happy.
by Lydia Wang
TV Shows
Kiernan Shipka Dropped A Huge Hint That Sabrina Part 4 Wil...
The teens of Baxter High are headed to Riverdale. Wait. Or is it the teens of Riverdale High are headed to Greendale? Oh, for hell’s sake, either way Chi
by Alexis Reliford
Entertainment News
B. Smith, The “Black Martha Stewart,” Is Dead At 70
Barbara “B.” Smith, a model, restaurateur, and lifestyle guru previously dubbed the “Black Martha Stewart,” has died at the age of 70. Smit
by Alexis Reliford
Pop Culture
Jennifer Lopez Gets The Baller Props She Deserves From Her Ex, Be...
Jennifer Lopez is getting big props for her Hustlers performance from a surprising person from her past: her ex Ben Affleck. Ain’t that funny, indeed. Af
by Shannon Carlin
TV Shows
Sarah Hyland Totally Gets Why People Think She’s The Kitty ...
With season 3 of The Masked Singer underway, the internet has been coming up with all sorts of theories about the celebrities hidden in costume. Sarah Hyla
by Lydia Wang
Pop Culture
Here’s Why People Think Prince Harry & Meghan Markle Are Ma...
Prince Harry and Meghan Markle announced they would drop their royal titles from any future nonprofit work, but that doesn’t mean they’re happy about i
by Shannon Carlin
Music
Blue Ivy Carter Just Won Her Second Award For Songwriting — & She...
Blue Ivy Carter, shusher of Beyoncé, skilled bidder at auctions, and now a two-time award-winning songwriter. Yes, two.  The eldest heir to the Carter th
by Alexis Reliford
Pop Culture
RIP To Jake Paul, Who Just Got Owned By Gigi Hadid On Twitter & W...
Forget making it Instagram official: Gigi Hadid just confirmed her relationship with Zayn Malik by annihilating YouTuber Jake Paul in a 40-word tweet. Late
by Lydia Wang
Pop Culture
Rihanna Wants Allies To “Pull Up” When It Comes To Supporting Bla...
Rihanna may not have given us an album in years, but she’s consistently given us words on activism, equality, and injustice. Her streak continued at the
by Alexis Reliford
Celebrity Couples
Press A Button For Champagne? Taylor Swift & Joe Alwyn Show They ...
Taylor Swift might prefer to keep her relationship with Joe Alwyn out of the spotlight, but that doesn’t mean she won’t spoil him on his birthday. To r
by Lydia Wang
Movies
Pixar’s Onward Will Give Disney Its First Animated LGBTQ+ Charact...
Diversity is still not great in the film industry, especially for LGBTQ+ movie characters, but Disney is continuing its efforts to change that. Recently, t
by Tara Edwards
Discover
R29 Stories & News
Watch
R29 Original Series & Films
Shop
R29's Most Wanted