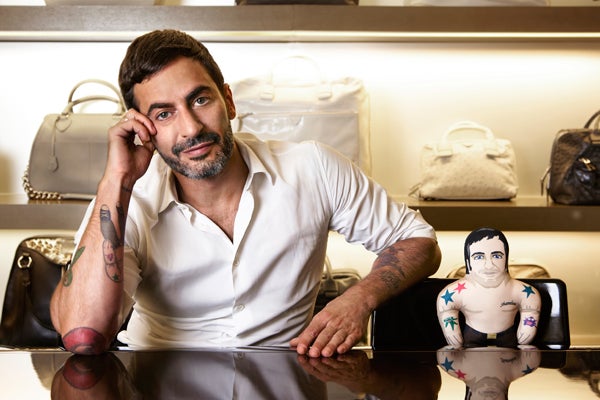 The South Park episode entitled "Cartman's Tea Party" has already become fashion legend thanks to the guest appearance of Muscle Man Marc, a Stretch Armstrong-type toy bearing more than a passing resemblance to a certain New York-based designer. A man of semi-infinite humor, Marc Jacobs embraced the South Park tribute, tattooing it on his skin (much as he did a likeness of him created by the Simpsons' animators), making a line of tees for the show, and putting Kenny, Kyle, Stan, and Cartman in his West Village store windows. Now Jacobs is offering up a limited-edition run of super cute Muscle Man Marc dolls for purchase. They give fans the unprecedented chance to get between the sheets with the cut bod, hot tattoos, and tiny, tiny briefs of Marc himself. Let's face it, it's as close as you'll ever get to snuggling with the real thing. (Also, Muscle Man Marc can beat the stuffing out of your Anthropologie throw pillows any day of the week.) WANT!

Designer Collaborations
You Can Now Shop Every Look From Target’s Anticipated Fall Design...
by Frances Solá-Sant...
Style
Is Target’s Upcoming Designer Collaboration Worth The Hype?
"This collection really brings each designer’s aesthetic in a unique way.”
by Eliza Huber
Designers
House of Aama Created A Fictional Resort Community For Its New Yo...
House of Aama’s New York Fashion Week runway debut introduced Camp Aama: a fictional resort community that celebrates Black folklore and heritage. On Sep
by Frances Solá-Sant...
Advertisement
Fashion Week
Chromat Debuts Swimwear For Girls Who Don’t Tuck At Jacob Riis, N...
“Chromat has been massively inclusive for over a decade now, and once again, has found a way to include another community in fashion.”
by Eliza Huber
Designers
Sergio Hudson Is Bringing His Inauguration-Day Glamour To NYFW
Growing up in South Carolina in the 1990s, Sergio Hudson paid close attention to the news — and, in particular, what people wore while making news happen
by Frances Solá-Sant...
Designers
You Can Now Shop Bridal Gowns From This Parisian Couture House, E...
The tulle, the ruffles, the fairytale etherealness of couture brides… All of those vibes are now available to shop for brides everywhere, thanks to Frenc
by Frances Solá-Sant...
Fashion
Proenza Schouler Brings A Utilitarian Spin To Birkenstock’s Sanda...
Update: The second Proenza Schouler x Birkenstock collection is now available. This story was originally published on August 2, 2021. As the American workf
by Frances Solá-Sant...
Designers
Scandi Style Is Evolving. What It Looks Like Now, According To Co...
Copenhagen Fashion Week has fast become one of the most popular emerging fashion showcases — and for good reason. The Spring 2022 edition wrapped up last
by Kristen Bateman
Designers
Telfar’s Liberia Collection Is Here
Update: Retailing from $60 to $290, Telfar’s Liberia Collection is now available on the brand’s website. This story was originally published on June 29
by Frances Solá-Sant...
Style
Kanye West’s Latest Yeezy Gap Release Is Here. Here’s...
Update: Missed out on the blue and black puffer releases from Yeezy Gap? Not to worry: Kanye West is back for round three, which includes a red version of
by Eliza Huber
Style
Rihanna Taps An All-Black Women Biker Club For The Latest Savage ...
On Friday, Rihanna released the August campaign for her size-inclusive lingerie brand Savage x Fenty, and its stars aren’t who you might expect. (Then ag
by Eliza Huber
Style
Meet The 25-Year-Old Designer Turning Tablecloths & Tea Towels In...
No trend has stolen the sartorial spotlight in 2021 quite like corsets. It began with the wildly popular Regency-era series Bridgerton causing a 123% spike
by Eliza Huber
Advertisement
Advertisement
Discover
R29 Stories & News
Watch
R29 Original Series & Films
Shop
R29's Most Wanted