Skip navigation!
Story from Entertainment News
For some, "I want" becomes "I get" far more easily than it does for others. And when you’re Mike Tyson, legendary heavy weight with threatening guns of steel, it probably comes a lot easier. Maybe that's why the guy's got his own Broadway show in the works. Now, we’re not saying that’s how the concept of the "Mike Tyson One Man Show" came up, but y’know, those bulging biceps probably didn’t hinder Spike Lee’s decision to direct. Far less ifs and buts crop up when you've publicly bitten off a hunk o'someone's ear to make your winning point (or so we would imagine).
Advertisement
An unusual collab (and concept, for that matter) unites the pair in presenting Tyson’s raw confessional and Lee’s debut show. A brief bout on stage for just six short nights takes Tyson to the Longacre Theatre at the back end of July. Lit by the bright lights of Broadway, shedding reason on life in and out of the ring (and the er, rumours of drugs and violence), we expect you’ll all have your calendars cleared (wouldn’t want to miss the next Nathan Lane after all) by the time the curtains come up. Here’s hoping Tyson can knockout the critics, too (womp, womp). (NJ.com) 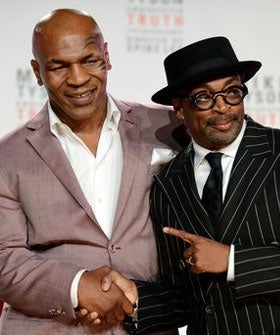