Skip navigation!
Story from Entertainment News
It’s a match made in "opposites attract" heaven – approchable yet adorable (and oh-so hilarious) Jason Segel and pixie-haired sweetheart Michelle Williams are officially Hollywood’s cutest "whodathunk?" couple. The ever-so-slight indie darling has had her share of hunky actor BFs, including Ryan Gosling and the late great Heath Ledger, but it seems she’s jumping on the funny-man wagon, and we like it. Both stars had huge turns last year (Segel in The Muppets, Michelle in My Week with Marilyn), but the two have known each other for much longer, since Williams’ BFF Busy Phillips and Jason acted together in the cult hit Freaks and Geeks.
Advertisement
Williams has been pretty public about taking time off to focus on raising daughter Matilda, and it looks like the L.A.-stationed Segel paid them both a leisurely visit to Brooklyn last weekend. This fuzzy pic clearly means this is real not-to-be-trifled with paparazzi fodder, and by the starry-eyed looks on their faces, this could be the first of many more to come!
Psst, Michelle: We all know Segel can play the devoted husband – teddy bear Marshall on How I Met Your Mother is just the perfect mix of earnest with awkward – so we really hope you hold on to this one! However, if things don’t work out, Jason, the ladies of L.A. will more than happily welcome you back into the fold. 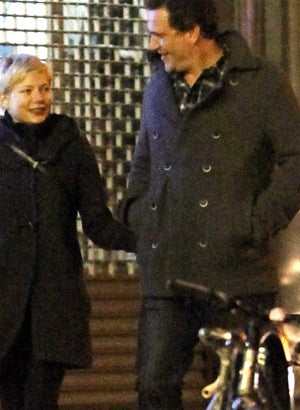 Photo: Via Us Weekly