Skip navigation!
Story from New York
Although we're always a little curious as to what guys think about our outfit choices, you can rest assured that we're never standing in front of a mirror thinking "What would Michael Vick think about these high-waisted jeans in a faded indigo dye?" or "I wonder if Michael Vick would say yay or nay to these faux-suede flatforms." Well, apparently others think differently—a pr flack has been making lots of calls, trying to get the football player seats at several New York Fashion Week shows. But, before you going into cardiac arrest wondering if Vick is trying to save his (rightfully) trashed image by turning into a designer, it seems as though neither Vick nor his publicist have anything to do with this; Instead, someone has stolen his publicist's identity to score him the invites.
Advertisement

To seal the deal, Vick's (real) rep said his client wouldn't want to go to NYFW anyway. Booyeah. We're confused, too, but we're not exactly upset that we won't be sitting next to this creep in the tents. Though the question remains — who was making these calls? And why do they want Michael Vick to go to fashion week so badly?
(Racked, TMZ) 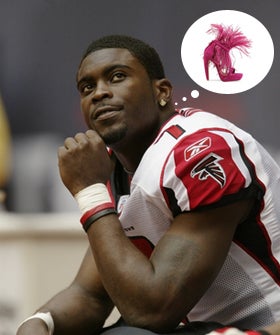