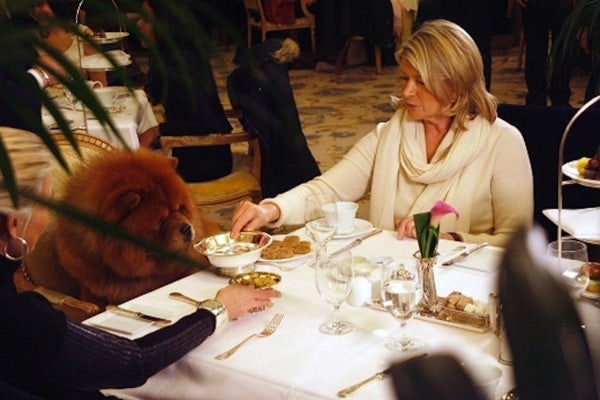 If we had to take a blind guess at one celebrity whose dog would not only enter but win an award at the Westminster Dog Show, it would of course be Martha Stewart's. It just makes sense, right? While Martha gave up modeling long ago, she's now passed the primped-and-pampered torch onto her Chow Chow, Ghenghis Kahn, who was named best in breed yesterday. Ggenghy's strut, build, and personality won him the attention and affection of the judges and the cheerful applause of his owner, front row. We say: Good for her! It's definitely a good thing. (Buzzfeed)
Photos: Via Buzzfeed
29Rooms
29Rooms Is Back; Here’s How To Attend Safely
Over the past year and a half, we’ve missed many opportunities to attend concerts, festivals, parties, and hangs. And although restrictions have loosened
by R29 Brand Experie...
Somos Latinx
Dear Miya Ponsetto, You Can Be Latinx & Still Be A Karen
Miya Ponsetto, the white woman dubbed as “SoHo Karen” on social media, was forcibly arrested in California yesterday. Her arrest comes after sh
by Jasely Molina
Food & Drinks
Is A Bagel Really A Bagel If It Isn’t In NYC?
by Elizabeth Buxton
Advertisement
New York
We Dig This NYC Dim Sum
by Camille Coklow
Beauty
The 17 Most Epic NYC Massages
by Kayla Jacobs
Movies
11 Movies Perfect For A Glorious Snow Day
by Vanessa Golembewski
New York
You HAVE To Try The Avocado Toast At These NYC Restaurants
by Elizabeth Buxton
New York
The Absolute Best Spots To Slurp Ramen In NYC
by Zoe Bain
New York
The NYC Rooftops You Need To Hit This Summer
by Elizabeth Buxton
Beauty
The Best Cheap Haircuts In New York City
Choppa style, for cheap.
by Liesa Goins
New York
The Indie Bride-To-Be’s Guide To Dress Shopping In NYC
by Ashley Castanos
New York
Is This Really What The NYPD Thinks About Rape?
NYPD captain Peter Rose has angered rape advocates after saying “acquaintance rape” cases are not as serious as rapes committed by strangers.DN
by Shannon Carlin
Advertisement
Advertisement
Discover
R29 Stories & News
Watch
R29 Original Series & Films
Shop
R29's Most Wanted