Skip navigation!
Story from New York
We all know meat cultivation has at least 99 problems to be worked out, but in a burger-tastic breakthrough, going green won't just mean lettuce on top. Turns out cattle production releases a serious amount of methane, so an anonymous donor in the Netherlands has (petri) dished the dough to fund lab-grown meat. This project will put a hold on the serious greenhouse gas emissions, not to mention the end of livestock livestock slaughter.
As it stands now, the patty's early stages aren't so appetizing: a fully-fleshed one will cost upwards of $300,000 (that better come with Proenza SS12) and apparently, it looks like a "yellow-pink sliver the size of corn plaster," (ick…). So while we're not holding our breath for a dollar-menu deal, we're keeping up with Dr. Mark Post, the head of physiology at Maastricht University, whose gunning for an October deadline. The donor is planning a no-holds-barred debut, enlisting an A-list chef and a celebrity taste-tester who can ignore the patty's decidedly unpalatable origins. Until this comes to full fruition, though, we're sticking with Shake Shack... mmm.... Shake Shack.... (The Guardian) 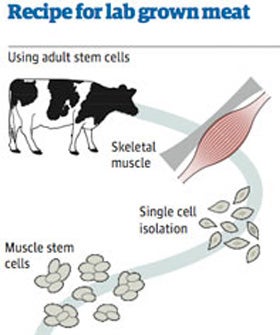