Jean-Claude Ellena has been called the Mozart of perfumery, but if perfumers were rock stars, we'd call him the Kevin Shields of scent. Relentlessly inventive, attuned to nuance, and masterful at developing layers of complexity, he's justifiably respected and admired by his peers and aficionados alike. (Like Shields, he's also a bit of a perfectionist.)
He has created bestselling fragrances such as Van Cleef & Arpel's First and Bulgari's Eau Parfumée au Thé Vert — along with abstract scents such as L'Eau d'Hiver, which perfume writer Chandler Burr memorably described as "silence and cloud." Since 1994, Ellena has been the exclusive in-house "nose" of Hermès, where he has created more than two dozen fragrances. His newest, Jour d'Hermès, is a gorgeously light, sparkling bouquet of flowers — think freshly cut, fragrant blooms and the idea of flowers instead of literal, nose-punching interpretations. All this, and he can write, too: The Diary Of A Nose: A Year In The Life Of A Parfumeur follows Ellena's meditations on fragrance, art, and the intersection of the two. Here, R29 talks with him about his creative flow — and how he knows when a perfume is precisely right.
Advertisement
When you set out to create Jour d'Hermès, where did you begin? Where did the idea blossom? “At the beginning it was just to show that I could make a feminine perfume.”
People didn’t think that you could? “No.”
Even after 45 years of being a perfumer? “Maybe it's my own problem. I wanted to show that I could do it, to prove it to myself. But the thing is, when you're an artist, every time you try to prove something to yourself. And it’s never finished. I’m never satisfied. Never. I’m satisfied maybe one minute, or five minutes, no more."
How do you complete a fragrance, then? How do you complete a work and let go? “The thing is, at one moment, I might be satisfied with a fragrance. I've said all I want to say at that point, and it’s finished. So, I put the fragrance aside and I smell it again two weeks later. The fragrance might say to me that it's not finished — because it really is a talk between the fragrance and me. In fact, it is a talk between me and me because the fragrance is me, of course. But, once the fragrance says, ‘No, there is nothing to add,’ it’s finished. And so, you put it on the side. You smell again. When the perfume feels perfect, then I know that it’s finished. The terrible thing is that if I smell it in two years, I might say, ‘Enh.’”

You’re very tough on yourself. 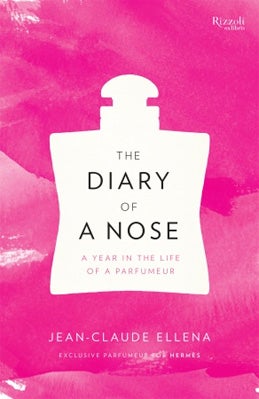 What is your typical day like when you’re creating a perfume? “I’m working on a few ideas at the same time, not only one idea. There are many reasons to have some distance with what I do. If you are only with one fragrance, you don’t have distance, and you don’t see what you are doing anymore. You know that, because if you write, you have the same problem. When you write, at the moment, you say, ‘Yeah, it’s nice.’ Two days later, when you read it again, you realize it’s not precise enough, or one word is missing, or you need to change a word. So, the distance is very important.
"Also, I try new ideas. If ideas are going through your head, you try them. You see the result and sometimes you say, ‘Put it in the garbage.’ And, from time to time, you say, 'Yes! This is interesting.’ When you reach that point, you put it aside, forget it, and smell it again: one week, two weeks, one month after. If the idea speaks to you once more, you say ‘Ah, maybe there is something interesting here.’ If the idea says nothing, you put it in the garbage."

Is it difficult to do that, putting an idea in the garbage?

“No. It’s part of the process. The most difficult thing with creativity is choice. Choosing is the most difficult thing. Because when you choose, you have to throw away a lot of things. If you are not able to do that, don’t be a perfumer — because 95% of what I do is brought to the garbage. Otherwise, we'd make nothing that's interesting.”
Advertisement
Having the creative freedom that Hermès gives you is very rare for a perfumer, isn't it? “When I came into Hermès, I felt like a fish in an aquarium: very comfortable. And it seems to be that this aquarium suits me! The main reason is because Jean-Louis Dumas, the previous chairman of Hermès, always thought that it was the artistry, not marketing, that drives Hermès. This is rare — very rare. I took more than one year to sign on as the Hermès perfumer. The main reason for this was to understand each other: Do we do it, or do we not do it? There was no obligation. At the beginning, I said to Hermès, 'If I work with you, I don’t want any marketing tests. The decision will be only with the president and myself.' It was my conviction from the beginning."

Skin Care
Adult Acne Is On The Rise — & It Goes Way Beyond Surface Level
Anxiety, depression, social isolation: For women, the symptoms of acne transcend the physical.
by Rachel Krause
Beauty
How To Stop A Sun Mustache In Its Tracks This Summer
After months of being cooped up in the house, you’d be remiss to not soak up some of the summer sun, right? Be it in the park, on the beach, or on yo
by aimee simeon
Most Wanted
Violet Grey’s New Luxury Value Box Is Filled With $680 Wort...
Update, July 1, 2020: In less than 24 hours, Violet Grey’s summer box has officially sold out, according to a spokesperson for the retailer. This st
by Karina Hoshikawa
Skin Care
Everything You Need To Know About Choosing A Deodorant
For a long time, most people judged their deodorant on two key factors: the scent (be it lavender or eucalyptus) and its ability to make armpit wetness a n
by Megan Decker
Skin Care
These Body Acne Products Will Get Rid Of Back & Chest Acne Forever
by Karina Hoshikawa
Beauty
Why More Young Women Of Color Are Saying No To Skin Lightening
If there’s anything that illustrates the open secret of skin bleaching in communities of color, it’s the Afro hair shop. Alongside aisles of shampo
by Fedora Abu
Skin Care
Glossier’s First Gel Moisturizer Is Here — & We Tried It First
Looking back on the early years of now-beauty behemoth Glossier, it’s hard to believe that it all started out with a humble starting lineup of rosewa
by Karina Hoshikawa
Skin Care
5 Dermatologists Share Their Quarantine Skin-Care Routines
“My skin-care routine is important to me and not something I’m willing to put on hold for the pandemic,” is how one Refinery29 reader recently de
by Caitlin Kenny
Beauty
15 Watercolor Tattoos To Inspire Your Next Ink
Body art has never looked so delicate.
by Refinery29
Skin Care
The One Thing You Need For Radiant Makeup-Free Skin This Summer
Not using tinted sunscreen yet? You're missing out.
by Megan Decker
Tattoos
16 Gorgeous Flower Tattoos You Should Get This Season
by Samantha Sasso
Beauty
Is It Safe To Get Botox Again?
As the world begins to slowly (and as safely as possible) reopen amid the current COVID-19 pandemic, elective medical procedures are back on the table for
by Megan Decker
Discover
R29 Stories & News
Watch
R29 Original Series & Films
Shop
R29's Most Wanted