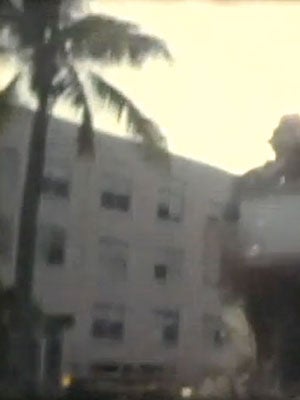 After the dark ages when South Beach was the '80s crime scene of Scarface, the island transformed into what became known as the Golden Glamour period, when the beautiful, chic set, including perhaps the glammest of them all, Gianni Versace, moved in. Gentrification soon enraptured the city and all was well in paradise. Until... wait for it... just like a scene from Miami Vice, Versace was famously murdered in 1997 in front of his mansion. According to Hunter Braithwait, of Miami blog There Is No There, this decline can be seen in director Kevin Arrow's movie Gianni Versace Harry Pussy, which will be screening at the Formalist Sidewalk Poetry Club tonight. Braithwait claims that the killing marked the end of the glitterati rule and the swinging palm trees slowly receded back to the South Beach of yesteryear. Enter recession punks, low-budget and danceable night clubs and wearing all black at the beach. Is this where we're heading to again? Even if you can't catch the flick, read Braithwait's opinion piece, and let us know in the comments below if you're of the same (slightly depressing) mind.

Tonight only, Kevin Arrow, will be screening
Gianni Versace Harry Pussy, shot in Super 8, at the Formalist Sidewalk Poetry Club at 9 p.m. He'll be discussing the murder, the film and the future of South Beach. 235 Southwest 12th Street (between SW 1st and SW 2nd avenues); 305-538-5980.

Photo: Courtesy of There is No There

Unbothered
Actually, Netflix, Content Like Dave Chappelle’s Transphobic Come...
Update: Netflix has fired the employee who was organizing an upcoming walkout (set to happen Wednesday, October 20) of trans staffers and allies in protest
by Kathleen Newman-B...
Unbothered
Shalita Grant’s Sherry Is The Best Part Of You Season 3 ...
This story contains spoilers for Netflix’s You Season 3.  When we first meet Shalita Grant’s character Sherry Conrad on Netflix’s hit series You, sh
by Kathleen Newman-B...
Somos Libres
Black Women Carry Reggaetón’s Foundation; Let’s Ensure They Reign...
“Our music, regardless that we have more feminine presence, is still ruled by the guys,” Ivy Queen, beloved Puerto Rican reggaetón pioneer and host of
by Ecleen Luzmila Ca...
Advertisement
Entertainment
María Isabel Finds Her Strength in Soft Bilingual R&B
María Isabel has mastered the art of songwriting. You can hear it in her sophomore EP, i hope you’re very unhappy without me. Through the eight-track pr
by Brenda Barrientos
Unbothered
Well-Read Black Girl & R29Unbothered Present The Black Love Readi...
by R29 Unbothered
Unbothered
Netflix Wants You To Join Its Book Club & Is Throwing In Uzo Adub...
From Bridgerton to A Series of Unfortunate Events to Shadow and Bone, many of Netflix’s exciting original offerings are adaptations of equally popular li
by Ineye Komonibo
Unbothered
Why Are We Fighting Over The Next Bond? Lashana Lynch Is Right There
This story includes spoilers from No Time to Die. After being delayed for more than a year due to the ongoing coronavirus pandemic, No Time to Die has fina
by Ineye Komonibo
Unbothered
Phoebe Robinson’s Tiny Reparations In The Publishing Industry
It’s almost absurd to think that Phoebe Robinson — a successful comedian, author and actress of 2 Dope Queens fame would have difficulty selling her fi
by Stephanie Long
Dedicated Feature
Insecure‘s Yvonne Orji On Why Her Onscreen Charact...
Insecure, the award-winning, critically acclaimed, insanely relatable HBO series, is all about what it means to be a Black woman in America. But at its cor
by Taiia Smart Young
Unbothered
Years After Her Death, The Science Community Is Still Treating He...
In the 1950s, a Black woman named Henrietta Lacks walked into Johns Hopkins Hospital to be treated for cervical cancer, and her cells would go on to b
by Ineye Komonibo
Unbothered
We’re Raising A Fist For The Radical Hood Library, Noname’s Lates...
Last week, Noname opened the Radical Hood Library, a Black-led, Los Angeles-based literary liberation project that was created to service Black and brown p
by Stephanie Long
Unbothered
What Lil Nas X’s ‘Montero’ Means To The Young, Black & Queer: A C...
In May 2019, I went home to Columbus, Ohio to visit my mother. It was her 60th birthday, but I didn’t just come home to celebrate her. I was also there t
by Amber J. Phillips
Advertisement
Advertisement
Discover
R29 Stories & News
Watch
R29 Original Series & Films
Shop
R29's Most Wanted