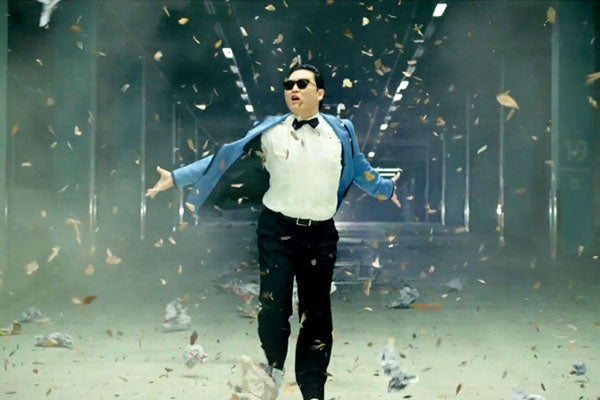 Last week, it was announced that Korean one-hit goofball PSY had reached the number-one video of all time on YouTube, beating out Justin Bieber for the top spot. While that may be an impressive feat, and one we can’t help but be happy to hear (the bewilderment of Beliebers alone was pretty satisfying to see), the question remains: How did PSY — a pop star unknown outside of South Korea — beat out the reigning king of YouTube?
Consider this: Each month, over 4 billion videos are watched, 800 million unique visitors head to the site, and 72 hours of video are uploaded every minute. That is a lot of watching/uploading/sharing going on. If you search, say, “cute octopus,” you wind up with thousands of results, many of them quite mesmerizing. After seeing those numbers, to learn that PSY was able to rack more than 830 million views is even more impressive. For one video to rise above everything else so dramatically takes a magical array of variables.
Advertisement
To put it into perspective, “Gangnam Style” was first uploaded to YouTube on July 15 as the first single of PSY 6 (Six Rules), Part 1. (The other five rules are, presumably, forthcoming.) That means those views have been accumulated up over the past four and a half months. If you do the math, you wind up with around 4.5% of all videos watched on YouTube over that time period being “Gangnam Style” (Nate Silver is currently double checking our numbers).
PSY’s meteoric rise to fame first began when K-Pop fans started sharing the video with their friends outside of Korea. K-Pop has certainly been on the rise lately, with acts like 2NE1 and BIGBANG touring the U.S. to enormous crowds. Still, those bands still haven’t quite found a foothold with Western audiences for whatever reason. (We think it’s still just a matter of time.) Regardless, it took the comically self-deprecating character PSY to truly break through.

As soon as the video started becoming viral, the programming directors of traditional media caught wind, and, in no time, PSY was on Ellen teaching Britney Spears how to “Gangnam Style” dance, giving her some of the highest ratings the show had ever seen. Along with the popularity, came the think pieces and parodies, which further contributed to PSY’s viral fame. The Atlantic had a great article that ran August 23, explaining how Gangnam Style is actually a subversive cultural critique skewering the opulent new-money Korean neighborhood of its title. Chinese dissident Ai Weiwei even used a version of the video to criticize the oppressive policies of the Chinese government. For those wondering if “Gangnam Style” is just another "Macarena," those novelty instances, in themselves, should be a good argument that the South Korean song is something more. Draw your own implications, but PSY is no Sisqó.
Advertisement
So, now that PSY sits atop the gilded YouTube throne, what’s next for the Korean megastar? With something as ubiquitously beloved as "Gangnam Style," he can probably ride out his post-Internet fame for a little while longer without dropping another single. Something as popular as “Gangnam Style” is as rare in the Internet age as it was at the height of TRL. Further proof that PSY still has legs? He’s managing to sell a huge amount of records — something that’s increasingly rare if your name isn’t Rihanna. The song was number two for seven weeks on the Billboard charts, and has just rebounded once again due to his mind-blowing duet at the American Music Awards with MC Hammer.
Beyoncé's already been confirmed for the Super Bowl, but it wouldn't hurt her to have a dance partner.

TV Shows
Mare Of Easttown Episode 5 Recap: “Doing Something G...
Major, major spoilers are ahead. Katie Bailey is alive. In the final moments of the last episode, it was revealed to viewers that Katie had been kidnapped
by Shannon Carlin
Best of Netflix
Halston Gets One Thing Very Right: Liza Minnelli Is The Re...
Spoilers are ahead. Halston, Ryan Murphy’s latest historical drama now on Netflix, takes a lot of liberties with the life and times of fashion design
by Leah Marilla Thomas
Best of Netflix
R29 Recaps: Every Episode Of Netflix’s Halston
The new Netflix limited series Halston takes a closer look at the man, the myth, the fashion legend born Roy Halston Frowick. Of course, the world knows hi
by Shannon Carlin
Advertisement
Best of Netflix
Every Song In Halston — From Studio 54 Disco To Those Liza...
by Leah Marilla Thomas
TV Shows
This Halston Finale Quote Captures Exactly What Make The S...
Major spoilers for Halston on Netflix are ahead. Netflix’s Halston is studded with arguments. Fourth episode “The Party’s Over” features the loudes
by Ariana Romero
TV Shows
Meet The Cast Of Characters In Amazon’s The Underground ...
by Asia Ewart
Entertainment
The Woman In The Window Ending Gives The Book Version A Sl...
Spoilers are ahead. Based on the best-selling thriller of the same name by A.J. Finn, The Woman In The Window attempts to answer the question: can a movie
by Olivia Truffaut-Wong
Entertainment
Don’t Freak Out — The ICarly Reboot Is Almost Here
Hollywood is loving the concept of a modern-day reimagining of a classic television series so much that it is tapping into a number of old favorites to reb
by Ineye Komonibo
Movies
The Woman In The Window Filled Its Cast With Oscar Nominee...
by Olivia Truffaut-Wong
Celebrity Couples
What’s Going On With Olivia Munn & John Mulaney?
Just days after confirming that his marriage to Anne Marie Tendler had come to an end, John Mulaney’s love life has a surprising new update that involves
by Ineye Komonibo
TV Shows
Does It Even Make Sense To Look For A “drivers license̶...
We’re all in this together… searching for references to the Joshua Bassett and Olivia Rodrigo chatter from early 2021 in the new season of High
by Martha Sorren
Best of Netflix
The 13 Most Anticipated Netflix Summer Movies Of 2021
by Lia Beck
Advertisement
Advertisement
Discover
R29 Stories & News
Watch
R29 Original Series & Films
Shop
R29's Most Wanted