Skip navigation!
Story from Dedicated Feature
There's no denying that marine plastic pollution is one of the greatest threats to our environment. According to new data, a staggering 1 million plastic bottles (mostly disposable water bottles) are sold globally every minute. This equates to roughly 20,000 bottles a second. The U.S. alone is estimated to throw away enough 12-ounce plastic bottles to circle Earth about 11 times a week or 600 times a year. A large amount of un-recycled plastic will eventually end up in the ocean and/or be mistaken by animals as food. In recent years, scientists and advocates alike have increased their efforts to raise awareness about this widespread issue — all while stressing the importance of taking action now. In partnership with adidas x Parley, we're sharing five easy ways you can make a difference to protect the ocean.
Advertisement

As of 2017, we've accumulated about 8.3 billion metric tons of plastic waste. 79% of it — like bottles, straws, grocery bags, and coffee cup lids — has wound up in landfills and the natural environment. Investing in a reusable water bottle is one example of how you can easily spend less and eliminate trash.
Source: Science Advances, Production, use, and fate of all plastics ever made, July 2017.

Oxybenzone, the UV-filtering ingredient found in most sunblock, is toxic to coral reefs. Scientists estimate anywhere between 5,400 and 12,700 metric tons of sunscreen lotion is released into the reefs each year, putting nearly 40% of them along coastal areas at risk.
Researches have also calculated that a whopping 8 trillion microbeads (tiny plastics used in everything from face scrubs to cleaning supplies) are washed into U.S. aquatic habitats every day. That's enough to cover 300 tennis courts.
As alternatives, switch over to using mineral-based sunblocks and goods made with natural exfoliators. 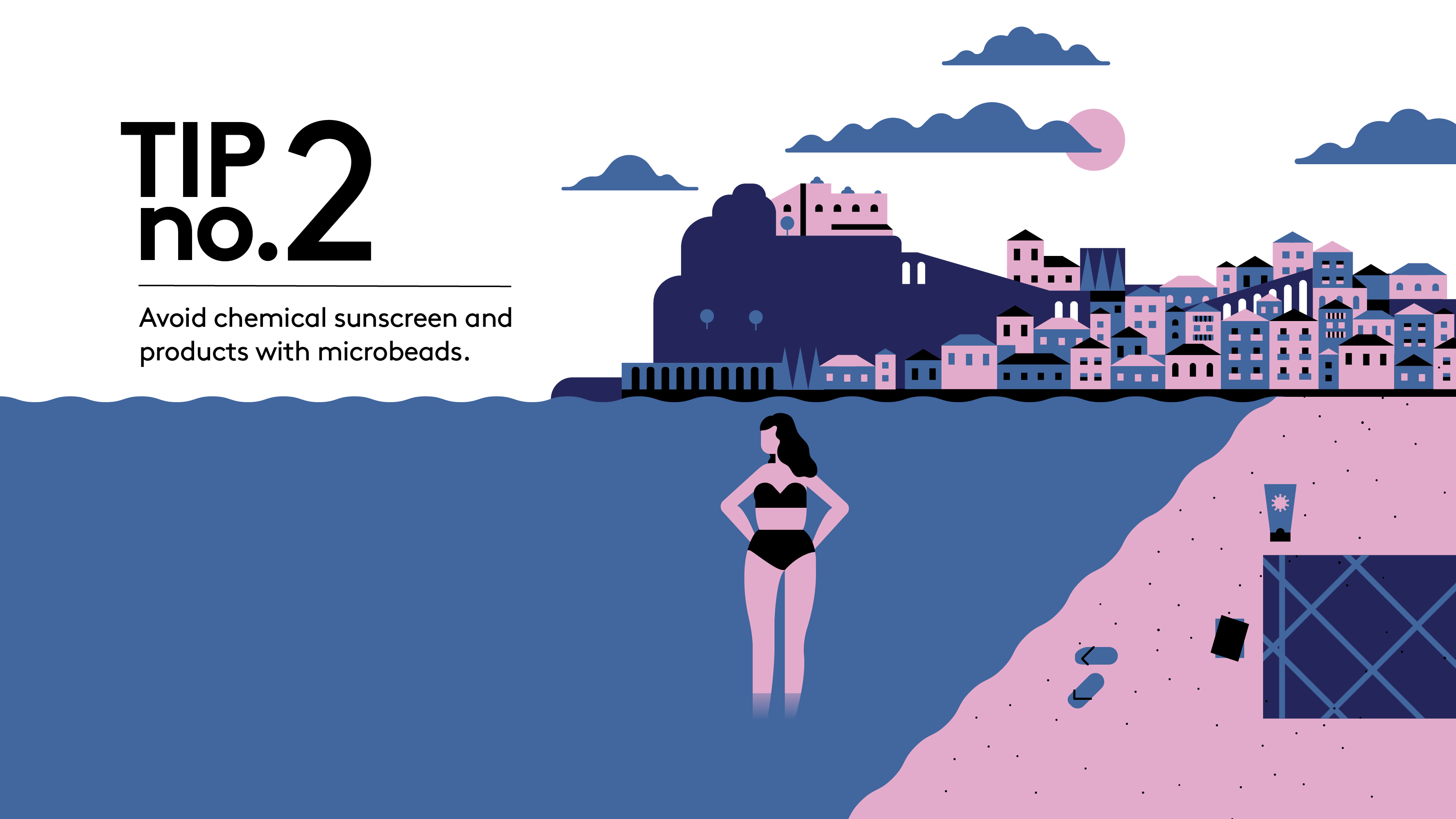 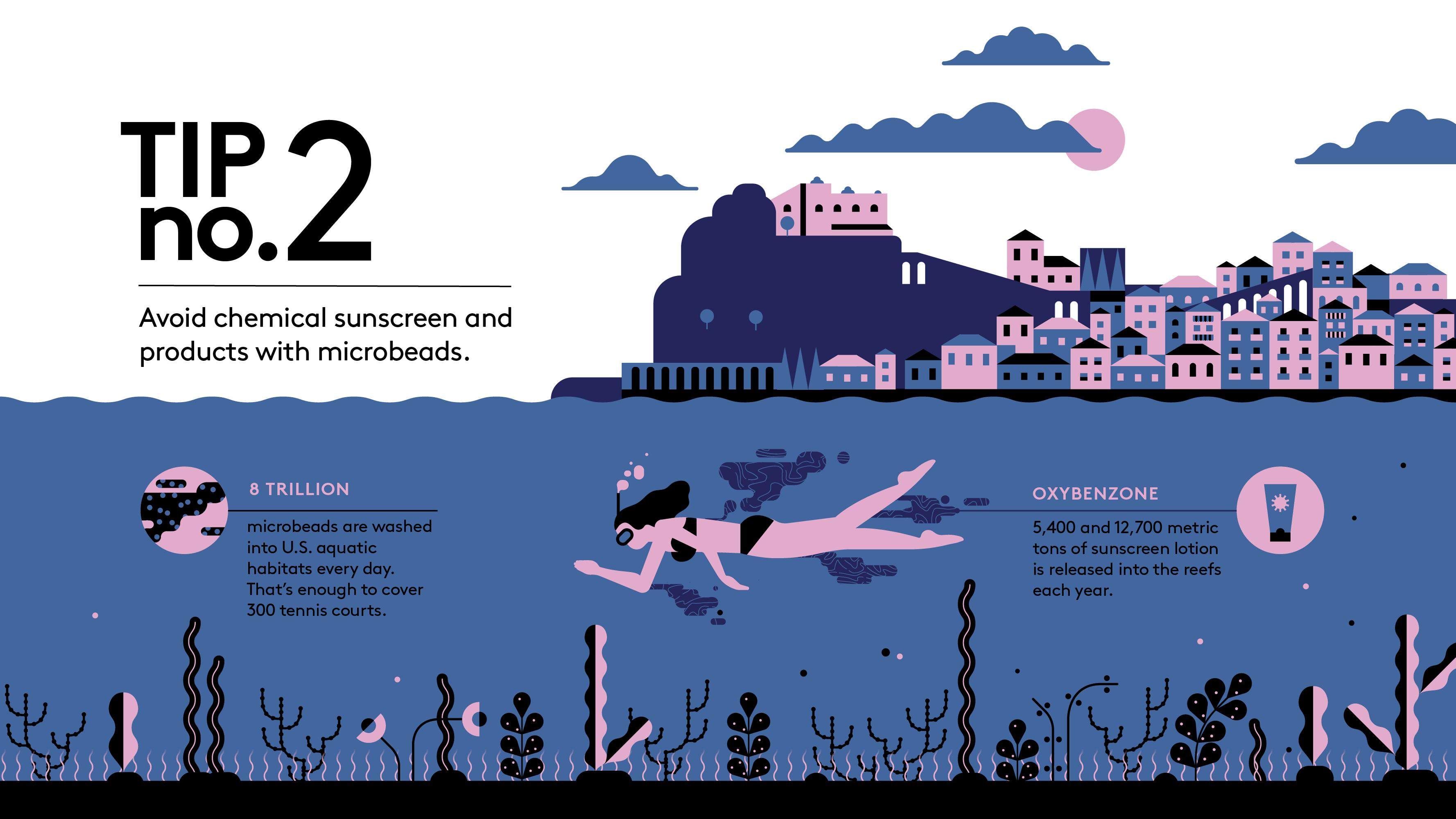 Wear items made with upcycled materials.

Aside from plastic bags, the bulk of marine plastic pollution comes from plastic beverage bottles. Once discarded into the environment, it takes an average of 450 years for just one bottle to decompose. In an effort to prevent plastic waste from entering our oceans, adidas partnered with Parley for the Oceans and turned a threat into a thread: performance sportswear.
Advertisement
Each pair of the Ultraboost Parley shoe is made with Parley Ocean Plastic™: upcycled waste from beaches and coastal communities that is intercepted before it reaches the ocean. Thus, by design, each pair prevents roughly 11 plastic bottles from further harming the ecosystem.
Source: New Hampshire Department of Environmental Sciences.

According to the EPA, "The most effective way to reduce waste is to not create it in the first place." Reusing plastic products rather than making new ones saves money and energy, and it lessens greenhouse gas emissions known to speed up global climate change.
Source: United States Environmental Protection Agency.

Participate in a beach cleanup.

There are at least 267 known marine animal and bird species that have suffered from the entanglement or ingestion of plastic debris. Always remember to pick up after yourself when you’re at the beach, and consider getting involved in a larger cleanup effort to keep wildlife safe.
Source: Research Gate, Plastic marine debris: Sources, distribution and impacts on coastal and ocean biodiversity, January 2016.
Advertisement
Related Stories
8 Bring Your Own Container Discounts
One Brooklyn Coffee Shop's Journey To Going Green
Unbothered
International Transgender Day of Remembrance And The Genocide Of ...
There is a genocide against Black transgender women happening. In a world in which transgender people are more visible than ever — gracing red carpets, s
by Aria Sa'id
Somos Latinx
The Indigenous Women of Mujeres Amazónicas Put Their Bodies on th...
In Ecuador, Mujeres Amazónicas has become a name synonymous with resistance. For nearly a decade, the group of about 100 women has fought to protect Indig
by Christina Noriega
Unbothered
It’s Time For The U.S. To Do Right By Haiti
These past few months, Haiti has been in turmoil. After the assassination of President Jovenel Moïse on July 7 in Port-Au-Prince, southern Haiti was devas
by Emmanuela Douyon
Advertisement
Unbothered
Everything You Need To Know About What’s Happening In Haiti...
Haiti is currently grappling with a severe humanitarian crisis after a 7.2-magnitude earthquake hit the Caribbean nation this past Saturday, killing at lea
by Tayo Bero
Coronavirus
Where Are All These New COVID Cases Coming From?
As of March 29, more than one-third of all Americans had received at least one dose of a COVID-19 vaccine. And while continued efforts to vaccinate a major
by Danielle Campoamor
Somos Latinx
The Fight Against Femicide & Gender Violence In Latin America Con...
Women in the United States are organizing demonstrations in solidarity with protests unfolding in Latin America.
by Nidia Melissa Bau...
Somos Latinx
Dear Zoe Saldaña: I’m A Proud Dominican. I Also Want To See Us Ad...
Like many readers of Somos, I was born in the U.S. but have roots in the Caribbean: My parents were born in the Dominican Republic, and I grew up celebrati
by Thatiana Diaz
Somos Latinx
Here’s The Truth About Dominican Independence Day
You wouldn’t be wrong to assume that when a country celebrates it independence day, they’re celebrating the moment they won sovereignty, their
by Thatiana Diaz
Culture
The Incredible Black Canadian Women You Should Know
by Kathleen Newman-B...
Black History Month 2021
From Black Wall Street To Bristol: The Past, Present and Future o...
Black folk have really gone through it this past year. Not only have we witnessed people who look like us being gunned down in their sleep, on the street o
by Jessica Morgan
Somos Latinx
Mexico’s Gender Violence Crisis Is Far From Over — & Women Are De...
On September 2, Marcela Alemán, the mother of a four-year-old girl who was sexually abused in San Luis Potosí, tied herself to a chair for more than 12 h
by Nidia Melissa Bau...
News
The Pandemic Of Black Trauma Will Never End
White people talk about how they can't wait for things to "get back to normal." But the past two months have shown "normal" still includes the murder of Bl
by Kathleen Newman-B...
Advertisement
Advertisement
Discover
R29 Stories & News
Watch
R29 Original Series & Films
Shop
R29's Most Wanted