New York Fashion Week was, in Internet time, years ago. But once the whirlwind of parties and our own personal FOMO has subsided, we at R29 were left thinking: When did this become such a crazy, sensationalist event? When did Fashion Week start to feel like Coachella?
Once upon a time, the general public had no idea what happened on a runway. Fashion shows were trade shows, after all. There was no reason for those outside of the industry, as it were, to see the garments pre-production.
Then, along came the Internet, the great democratizer. With the advent of Style.com in '00, it appeared that no one needed exclusive invites when what happened inside the tents was, captured, photographed from every angle, and instantly posted online. By 2009, Lee McQueen was beaming his entire spring '10 presentation directly into our homes. Amazing, right? So egalitarian and fashion for the people.
Advertisement
So, why is it that today, in the wake of all of that, NYFW feels more divided and exclusive than ever? More access, popular interest, and quickly updating sites should empower us, not force us to strain our necks to spot the garments on the runway. Why is the gap between the front row and "everyone else" growing into such a wide gulf?
Fashion has a history of following social and political trends, and, in a strange imitation of the current economic climate, the space between the "haves" and the "have-nots" is now bigger than ever. We don't mean, of course, those with literal affluence or the impoverished, but the individuals who fashion welcomes and panders to...and, erm, everyone else. It is, following the economic metaphor, like fashion has lost its middle class. People's Revolution PR President/Partner Emily Bungert points to a distinctive change: "The seating charts now are totally different, as a lot of the regional newspapers cut their fashion editors, so there is a decrease in regional reviewers, which have been replaced by multitudes of bloggers."
Fashion Week, at its core, is an industry event that, lately, seems to be missing the industry piece of the puzzle. Buyers, stylists, and editors once sat to watch shows without consideration of the row or seat they were given. Now, their seats have been filled by celebrities on a publicity blitz, B-list socialites dying to see and be seen, locals hoping to score a really rad Facebook update. You sit in the front row, or, well, you don't matter. You aren't on Tommy Ton, you won't tweet something as clever as the Fug Girls, and Daily Front Row isn't interested in your story. If you don't matter, you are just a part of the herd wrangled by an exhausted PR team when the lights begin to dim.
Advertisement
Yet this season, with the continued confusion about where to seat bloggers, the shows made it clear: Either you are there to make a spectacle, or you are there to bear witness to it — any middle ground ceased to exist. While the Victoria Beckham show is a notoriously tough ticket to come by, the belt was even tighter on her friend Katie Holmes' Holmes & Yang presentation. The designer reportedly didn't invite any online media, extending the guest list to a very meager few.
On the other hand, the absence of Milk Studios as a presentation space was notable — while the venue's Saturday night smorgasborg was a must-crash event, the general hang-out-with-a-free-drink vibe was seriously nipped in the bud this season. In fact, once jokingly referred to as Lincoln Center Jr., Milk Studios only hosted a handful of runway shows this season, instead of the plethora of presentations…which would often turn into impromptu parties. Perhaps Holmes was right to choose to lock down her show instead of having 600 onlookers and hungry street-style photographers rushing the doors on 15th Street. Amy Odell, formerly of The Cut and now editor of Buzzfeed's Shift (who recently penned a great piece on how social media is impacting fashion) points to the notoriously closed-off Tom Ford, saying, "While it personally frustrates me, I can kind of get where he is coming from, and why he wants to lock it down."
Advertisement
And then, there was the slap. When noted Italian publishing exec Marie-José Susskind-Jalou — along with her daughter and L'Officiel magazine editor, Jennifer Eymere — accidentally had their seats cut at Zac Posen, Eymere's frustration culminated in physical violence against a PR rep. The details are scant, but when a catfight erupts over a seating fracas, you know the seat-assignment-as-status-symbol situation has become dire.
A senior account executive at PR group that chose to remain anonymous explains: "There's an ever-growing sense of entitlement. Don't get me wrong, the evolution of the blog and plethora of social media channels is invaluable. But now there's a host of self-proclaimed 'style experts' who attribute everything they know to spending hours watching reruns of Project Runway, and cause a scene at the front door in some outlandish outfit (you know, for street-style pics, duh) demanding entry. At the end of the day, fashion is a business." 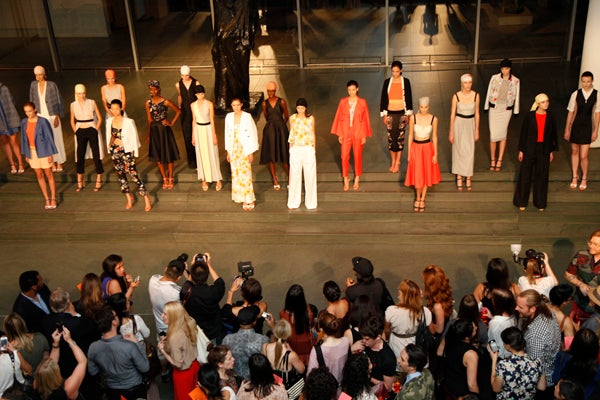 Recently, we here at Refinery29 had a look back at some of the footage of the spring '02 shows — the September 11, 2001 Fashion Week, when all eyes were glued to the goings-on in NYC — for our retrospective post. Of course, the shows were subdued due to the attacks on the WTC, but even then, the largest designers, the Donnas and the Oscars, hosted small, intimate previews, with zero celebrities and only top buyers and editors in attendance. There was no instant social media, no physical violence in the tents, and no spectacle. The idea of an "overnight fashion celebrity" wasn't exactly foreign, but Tim Gunn and Heidi Klum were still a world away.
Advertisement
With the forward motion of the 'Net, NYFW became more democratic. More web sites began to post every look on every runway, in practically real time. The Sartorialist helped coin the term "street style" for spotting fashion outside of the tents, Proenza Schouler and (then-called) As Four brought the focus downtown, Fern Mallis encouraged the fashion world to embrace change, and most tellingly, Tavi appeared and stated, "Sure, there are the Cathy Horyns of the world, who have this great grasp of history, but the Internet is so accessible." The democratization of fashion became something to weigh in on, bloggers and upstart ingenues appeared, and we invented hash-tag #fashionweekproblems.
But, is this all a good thing? Is it contributing to a more creative environment? Harper's Bazaar editor-in-chief, Glenda Bailey, makes the point that that's not always the case: “I've always said fashion is part of the entertainment industry, and these days it feels even more so. Some fashion shows are like blockbuster films and others are cult indies. But just because more people came to see your movie doesn't mean it's going to win the Oscar.”
In tandem with the economy, in fashion as in entertainment, when everything is pumped up and egregiously commodified, the privileged and elite benefit, while those on the middle tier get lost in the shuffle.
Of course, it isn't just Fashion Week that reflects the growing gap between the "ins" and "outs" — it is all of fashion culture. Obviously, it is a community that is based on the buying and selling of products, but now it appears that fashion envelops the buying and selling of events, too. On top of a show feeling like Coldplay at MSG, once insider-y events like Fashion's Night Out — which, if you recall, was initially started as a way to seriously inject cash into NYC stores — have become a way to see your favorite celebs and overturn cars in a furious fashion frenzy. Even street style, the once-democratic way of focusing on the style and beauty of real women, has become a commodified, steroid-enhanced competition. Odell smartly adds, "People try so hard to become personalities. In order for that to happen, people need the best photos for their Twitter feeds and the best seats from which to take the photos. People who are able to build large social media presences this way become important — sometimes tastemakers — and others who shun social media feel threatened when it appears they aren't the tastemakers they think they are."
Advertisement
As the scope and coverage expand, and with apps that live-update and stream shows, seating charts and grant backstage access, bedroom critics have more access than ever. But along with increased participation, New York Fashion Week has become an event. Spot Anna, Olivia, or Mary-Kate, get an invite to Alexander Wang, scoop an Instagram of Altuzarra.... Or, more recently, nab a ticket to Holmes & Yang or score a seat to an overstuffed Posen. But it had better be in the front row, otherwise, it's like you weren't there.
Yet, real talk, no one needs to be present — not anymore, and not with this unprecedented online access. So, is there still a point to Fashion Week? Does it help to prove you are present? Bungert says yes. "The important web sites that are writing actual reviews, such as Style.com, get seating priority." Despite her lament, Odell agrees, saying, "It might not be such a bad thing to have everyone tweeting your show and getting excited about it." We don't have a solution. In some ways, the attention and clusterfutz is exhilarating and, at times, empowering. But is the drama, the pushing, the cell-phone snapping, and the slapping worth the seven-to-nine minute presentation of clothing that might not be made?

Unbothered
Black American Culture Was Missing From The Met Gala Red Carpet
The Met Gala, fashion’s most anticipated and glamorous red carpet event, took place last night (Sept. 13) and there’s a lot to unpack. Usually held in
by Venesa Coger
Met Gala
According To The Met Gala Red Carpet, This Is What’s Important Ab...
by Eliza Huber
Celebrity Style
A Tribute To The Best Met Gala Looks Of All Time
by Eliza Huber
Advertisement
Style
Here They Are: The Best Oscars Looks Of All Time
by Eliza Huber
Style
Every Winning Fashion Moment From The Live 2021 Oscars Red Carpet
by Eliza Huber
Style
We Did The Research & These Are The Best Golden Globe Looks Of Al...
by Eliza Huber
Fashion
How Copenhagen Put Sustainability At The Forefront Of Its Fashion...
Though not one of the major four, Copenhagen Fashion Week has, in recent years, been a hotspot for trends that matter. Between its effortlessly cool street
by Irina Grechko
Fashion
The Digital Fashion Experience Isn’t The Same — & That’s A Good T...
Ever since the pandemic put an end to many fashion weeks and high-profile shows around the world this year, the question of the fashion-minded has been, Wi
by Irina Grechko
Style
Shanghai Fashion Week Cancels Next Month’s Event Because Of...
Shanghai Fashion Week, which typically takes place after Paris Fashion Week in March, has officially been postponed due to the coronavirus outbreak. The or
by Sara Radin
Golden Globe Awards
The Golden Globes Red Carpet Is One Fashion Moment After Another
by Eliza Huber
Fashion
All The Best Fashion Moments From The Orange Is The New Black...
by Mekita Rivas
Fashion
Comic-Con 2019: The Best Fashion Moments
by Mekita Rivas
Advertisement
Advertisement
Discover
R29 Stories & News
Watch
R29 Original Series & Films
Shop
R29's Most Wanted