Skip navigation!
Story from New York
It’s not exactly a secret that driving in New York is a disaster (we’ve had nightmares of —shudder—maneuvering around midtown during rush hour), but that’s no reason to get physical. Sure, finding a parking spot in Manhattan is the kind of thing we might say that we’d “fight for,” but jewelry designer Dawnelle Yager took the expression a tad too literally when she beat up a man for a parking spot in the West Village.
Yager runs Soixante Neuf Jewels (which, yes, is French for “69”) under the name Joie Jager. The incident went down yesterday when she was backing into a parking spot at the same time that Meng Dong, 29, was pulling into the space. Yager got out of her Mercedes Benz and, according to the criminal complaint, began hitting Dong across the chest several times before going full on manic-Mary-Poppins and beating him up with an umbrella. The designer was, of course, arrested, but is now out on bail.
Advertisement
We know New Yorkers are known for road rage, but this seems a little, well, excessive. What’s the most you would do on the road rage scale (from one to umbrella) when it comes to getting a coveted parking spot? (Daily News) 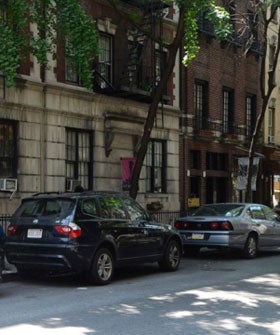