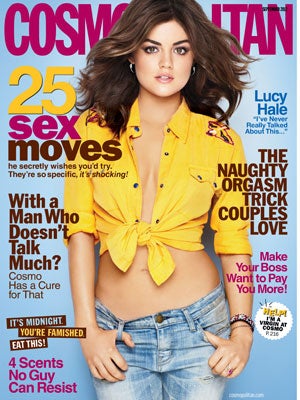 We have to admit, we were a bit taken aback when we learned that Lucy Hale, the star of ABC Family's Pretty Little Liars and the third installment of A Cinderella Story (perhaps you remember the original, starring Hilary Duff and that guy from One Tree Hill?), was covering the September issue of Cosmopolitan. While we think Lucy is lovely (seriously, those doe eyes and that fringe or lashes make us do a double-take every time we see her), she feels a bit...teenybopper to be the face of the magazine that essentially defines mainstream sex appeal.
The young star is actually 23, but she plays a teen on TV and in movies, and she certainly evokes Lolita imagery, posing in the signature Cosmo stance, wearing a tied, midriff-baring button-up and low-slung jeans that feel reminiscent of a "Baby One More Time"-era Britney Spears.
Advertisement
So, seeing her on the magazine's most high-stakes cover of the year, we have to ask: Why are cover girls getting so young? We've seen this across a variety of adult titles, but we're particularly interested in what's going on over at Cosmo, partially because the magazine plays a major role defining what sexy looks like on a global scale; partially because this is the title that's carrying on the legacy of the late, great Helen Gurley Brown; and partially because it's the best-selling monthly mag on U.S. newsstands. Period. In fact, as the Times points out, if you rounded up all of the Cosmo readers around the world, the group would form a population the size of the 16th-largest country in the world.
It's undeniable that the magazine has serious influence, and after a bit of digging and number-crunching, we turned up some interesting facts. The average age of the Cosmo cover girl is in fact getting younger. In '10, that age was 28.4, in '11 it was 26.75, and so far this year, the average comes out to 23.8. And, the outliers are getting younger, too. In '99, the oldest cover girl was Shania Twain, at the age of 33; in '00, it was Lisa Kudrow, at 37. So far this year, the ages have ranged from Pink, at 32, to Dakota Fanning, 17. (This year, 18-year-old teen stars Selena Gomez and Demi Lovato also graced the cover, while last year's youngest cover girl was Hayley Williams, at 22).
Advertisement
What does all of this mean? That part is up for debate, but if you ask us, it suggests that the mainstream definition of womanly and sexy is changing, and increasingly, older women are being told, at least subliminally, that they aren't it. Instead, we're being told that since we are literally losing value as we age, the way to feel sexy is to channel our inner teen (or take advice from a teen girl). That said, we're not blind to the fact that sales obviously factor in here as well. Young stars bring with them young readers with disposable income — a demographic that's very attractive to advertisers.
But does that make it okay? After revisiting these inspiring old-school Cosmo covers, featuring cover lines tackling hot-button issues like the introduction of the pill and insights into the mind of a rapist, we have to say no. But you tell us: How does seeing a Lucy or a Demi or Selena on the cover of a women's mag make you feel? Take to the comments and let us know if we're getting bent out of shape for no reason, or if there's real cause for concern here.

Beauty
How Social Media Helped Me Recognize My True Beauty
For some, a lipstick is just a lipstick. But for others, it’s a source of strength, creativity, and expression. In our series Power Faces, we’l
by aimee simeon
Celebrity Beauty
Lauren Conrad’s “Triangle Twist” Manicure Is So...
The last time we paid close attention to Lauren Conrad‘s manicure was probably circa 2005, when she (and everyone else in L.A.) was wearing squared-o
by Megan Decker
Celebrity Beauty
Cardi B Got Real About Breakouts & Asked Her Twitter Followers Fo...
Like so many of us struggling with winter dryness combined with daily mask-wearing, Cardi B revealed today that her skin hasn’t been on its best beha
by aimee simeon
Celebrity Beauty
Brooklyn Beckham’s New Neck Tattoo Is A Literal Love Letter
Brooklyn Beckham just posted a photo on Instagram of a sizable new tattoo on the back of his neck in honor of his fiancée, actress Nicola Peltz. It’
by Sarah Midkiff
Celebrity Beauty
Dakota Johnson Got A Belly-Button Piercing — With Her Mom
In a recent interview with James Corden on The Late Late Show to promote her new film, Our Friend, Dakota Johnson got on the get-to-know-you topic of tatto
by Sarah Midkiff
Celebrity Beauty
Jessie J Gave Herself A Dramatic At-Home Haircut — & Documented I...
Yesterday, English singer Jessie J posted an Instagram video giving fans an in-process look at her DIY haircut. With chunks of hair strewn all over the flo
by Sarah Midkiff
Celebrity Beauty
Hailey Bieber Honored A “Happy Day” With This Hairstyle
They may have first come back into fashion as a byproduct of our quarantine style fatigue, but accent braids are proving to have a lot more staying power t
by Sarah Midkiff
Celebrity Beauty
Twitter Holds An Inauguration Celebration For Michelle Obama̵...
Today marks a new chapter in United States history: Joe Biden and Kamala Harris have been inaugurated as our new President and Vice President. Though circu
by aimee simeon
Celebrity Beauty
Ana de Armas Just Won Best Breakup Haircut Of All Time
Following the news of her reported breakup with Ben Affleck, actress Ana de Armas just revealed a very drastic change to her look. Call it a breakup cut or
by Megan Decker
Celebrity Beauty
Selena Gomez Makes A Case For Putting Flowers In Your Hair Right Now
In the middle of winter, we normally find ourselves wrapped up in a sweater and dreaming of warmer days. That said, Selena Gomez’s latest Instagram post
by Sarah Midkiff
Celebrity Beauty
Chrissy Teigen Just Got The Sexiest John Legend-Inspired Back Tattoo
John Legend wrote a song about Chrissy Teigen, and his wife just returned the gesture by getting the name of the track, “Ooh Laa,” inked on her
by Megan Decker
Celebrity Beauty
Demi Lovato’s Side-Buzzed Pixie Just Got A Pastel Upgrade
New year, new hair — for Demi Lovato, at least.
by Sarah Midkiff
Discover
R29 Stories & News
Watch
R29 Original Series & Films
Shop
R29's Most Wanted