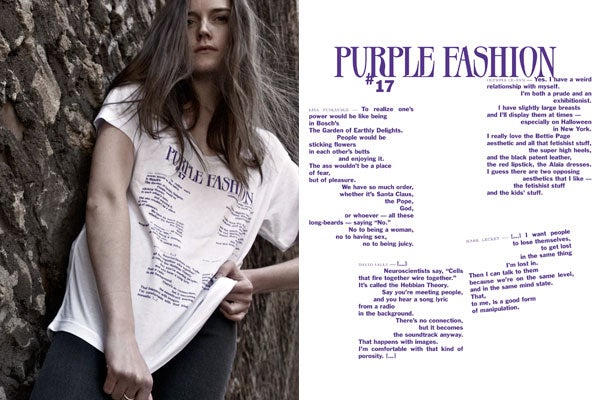 Yes, your favorite dirty, delicious French fashion mag,
Purple
is now publishing their text on cotton as well as paper, thanks to a tasty little collab with one of our local heroes, Johan Lindeberg's BLK DNM. To celebrate the first-year anniversary of their launch (wow, has it been a year already?), BLK DNM invited Purple's scruffy, nudie-pic snappin' editor-in-chief, Olivier Zahm, to curate an in-store art exhibit at their Soho store featuring the works of Spencer Sweeny, Max Snow, Olaf Bruenning, and, naturally, Terry Richardson. On view from tomorrow, Saturday February 11 till Fashion Week's end on the 16, the exhibition, on top of the photos, music, and film that adorns the space, will house the collab— a cool tee featuring text by Purple contributors Olympia Le-tan, Mark Lecky, Lisa Yuskavage, and David Salle. If that wasn't enough, there'll be a nice kick off party from 2 p.m. to 8 p.m. tomorrow with poster signings by Robert Longo at 3 p.m. and, best of all, you'll get 40% off your second pair of jeans whenever you mention Refinery29 at checkout all the way until Purple vacates the premises on Thursday! Bargains, bashes, and fashionable baseness – all in one place!