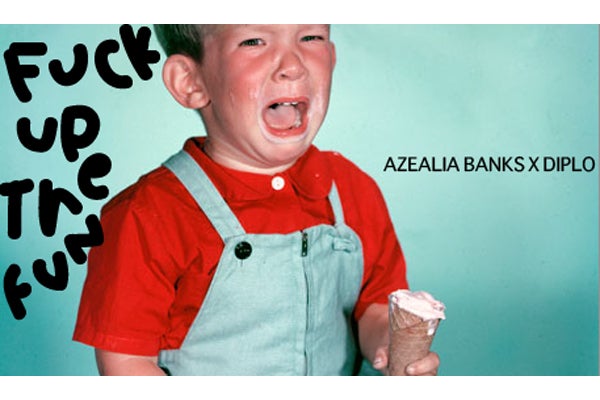 For her latest single, “Fuck Up The Fun,” rising rap star / fashion icon / internet sensation Azealia Banks takes on the hype machine that helped create her. Aided by Diplo’s D-Block-inspired marching band snares (Is it just us, or is Diplo everywhere lately?), Banks’ rapid-fire, hookless flow mostly avoids the sexual olympics she’s been known for, instead taking to task YouTube celebrities, haters, and everyone in between (On Twitter today, Banks described the song as "Just some very general 'rap-bitch' banter over some cute drums."). As the song ends, Banks’ rhymes devolve into a spoken word puddle — just Banks with some shit to get off her chest. “Fuck Up The Fun” isn’t the sort of track that’s going to win Azealia any new fans, but as two and a half minutes of high-energy spitballing, it couldn’t be any better.
Advertisement

Azealia Banks
"Fuck Up The Fun (Produced by Diplo)"