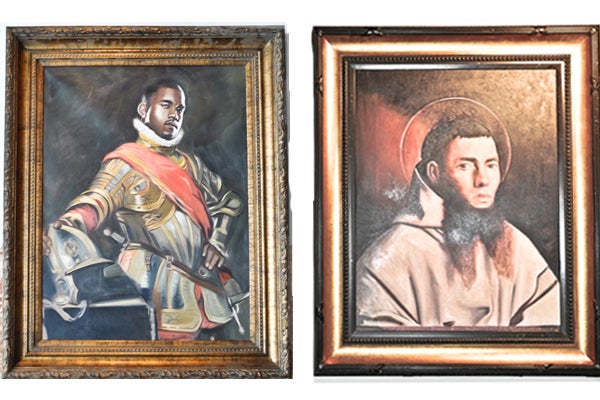 We're sure rappers would love to be called "Your Majesty" on the regs (it has to have been requested of an assistant-slash-umbrella-holder somewhere along the way, right?), but L.A. street artist Kai is going one step further. He's truly giving music's nouveau nobility the royal treatment in his "Now Royalty" exhibit.
The trained-in-painting rogue has been heralded for his graffiti since '09, when he thoughtfully replaced the "Marlborough" with "Morons" on a ciggy box mural — and his dad quit as a result! Well, when Kai heard a knock on the door of his pad in Malibu one night, it happened to be Drake's tour manager warning him of a loud party about to rage at the neighbors'. After he joined in on the hijinks, many other doors opened for the artist within the rap community (his work was shown backstage with Lil' Wayne at SXSW), and thus, his inspiration for this exhibit, opening tomorrow.
Advertisement
There's been gossip that Eminem has already snatched up the monastic depiction of himself (narcissist mantlepiece material, much?), and the word on the street is that Jay-Z and Tupac reign as gentry in a few of the other 26 oils on canvas. Last little rumor on the block? The first 100 people to show up will receive a free serigraphed collectible print! We'll be there, fo' schizzle.
When: May 4 through May 7, check here for hours.
Where: Guetta Gallery, 645 Martel Avenue (near Melrose Avenue).

TV Shows
R29 Recaps: The Many Horrors of Netflix’s Midnight Mass
Mike Flanagan terrified us with The Haunting of Hill House and Bly Manor, but now he’s back with a new goal: to make us believers. Instead of having
by Shannon Carlin
Unbothered
The Passing Trailer Highlights That Race Is A Delusion
“Race is a delusion,” my friend sighed. We had been discussing passing, the act of someone from one race being accepted or perceived as a member of ano
by Nylah Burton
Unbothered
Hey, Hurston/Wright Foundation — What About Black Trans Lives?
Updated September 24, 2021, 4:06pm ET: In 1990, Marita Golden and Clyde McElvene created the Zora Neale Hurston/Richard Wright Foundation as a supportive s
by R29 Unbothered
Advertisement
TV Shows
Marie Kondo’s Tidying Ways Go Deeper Than Just Sparking Joy In A ...
In 2019, Marie Kondo’s Netflix series Tidying Up With Marie Kondo gave a global spotlight on how to find happiness through organization at home. It helpe
by Morgan Baila
Unbothered
Just One Episode In, Our Kind Of People Is Our Kind Of TV ...
Although Martha’s Vineyard is predominantly known as the playground for wealthy white people, it’s also home to an exclusive community of some
by Ineye Komonibo
Unbothered
How Are Black Folks Redefining & Reclaiming Luxury? Elaine Welter...
“What does [luxury] really even mean?” asks Chelsea Sanders, co-host of Go Off, Sis, the podcast from Refinery29’s Unbothered. “Des
by Taiia Smart Young
Unbothered
If Your “Diverse” Teen Show Isn’t Giving What Sex Education
Welcome to “What’s Good,” a column where we break down what’s soothing, distracting, or just plain good in the streaming world with a “rooting fo
by Kathleen Newman-B...
Unbothered
Jennifer Hough’s First On-Air Interview About Nicki Minaj &...
*Editor’s note: this story contains discussions about sexual violence, threats, and intimidation. Please read with care.  A month after publicly all
by R29 Unbothered
Entertainment
Mj Rodriguez Takes The Mic For Her Next Act As Michaela Jaé
She made history as the first trans woman to be nominated for a major acting Emmy — but she’s more than just a label. The Afro-Latinx actress, singer,
by Ariana Romero
Entertainment
Bachelor In Paradise Season 7, Episode 9 Recap: Body Tacos...
Going into this episode of Bachelor in Paradise we knew a few things were going to happen: Kendall’s fate on the beach would be decided, new contestants
by Lia Beck
TV Shows
What Happened At The Hotel, Ivan?
On Bachelor in Paradise, the cameras are usually around to capture any drama or sparks between contestants, but due to a tropical storm briefly shuttering
by Martha Sorren
The Bachelor
Everyone Who’s On Bachelor In Paradise This Season —...
by Martha Sorren
Advertisement
Advertisement
Discover
R29 Stories & News
Watch
R29 Original Series & Films
Shop
R29's Most Wanted