Chances are, you're familiar with Andy Warhol's bright, celeb-infused paintings, as well as Robert Indiana's iconic "LOVE" image with the tilted "O." And while these loud, in-your-face works are instantly recognizable symbols of the Pop Art movement, they can sometimes overshadow the artists themselves. If you're curious as to what these creative giants were up to before they hit the big time, head over to Site/109 to see the new exhibition, "Before They Were Famous:
Behind The Lens of William John Kennedy." This collection of photos — shot, of course, by American photographer William John Kennedy — depicts the early days of Warhol and Indiana's careers, and shows them in the process of making some of their now well-known pieces. And, as if getting to glimpse these never-before-seen masterpieces wasn't enough, there are going to be rare works by the artists on display as well, including the last known "LOVE" banner in existence. The exhibition will only be in town until the end of May, so be sure to check it out before it's gone — it is educational, after all.

When: Exhibition open from Thursday, April 19, through Tuesday, May 29, Wednesdays through Sundays from 12 to 6 p.m., and Monday and Tuesday by appointment; opening reception on Sunday, April 22, from 6 to 8 p.m. 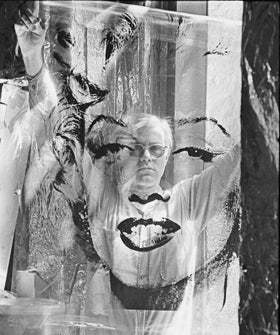