Skip navigation!
Story from Celebrity Style
We’re not gonna lie: When we first caught wind of Ashton Kutcher starring in the Steve Jobs biopic, we were naysayers and couldn’t completely grasp the seemingly bizarre casting. It was tough for us to imagine an actor that once played a scruffy-faced stoner embodying the Apple visionary. But, we have to admit — we’re kinda-sorta whistling a different tune of late. Over the weekend, we caught a glimpse of Kutcher, along with his co-star Ahna O'Reilly (she plays the Apple CEO’s first girlfriend), on set in Palo Alto looking strikingly similar to Jobs. And now we can’t deny that the much-debated resemblance is definitely there.
Advertisement

The Daily Mail captured Kutcher in a belly-grazing top, wide-leg pants, and Birkenstocks — an ode to Jobs’ hippie-dippie days. It seems the cast of the highly anticipated
Jobs
is hard at work to get this film out asap, so you can expect many more behind-the-scenes pap snaps to come. In the meantime, if you’re hungry for more Steve-tastic pics, Perez Hilton also posted a shot of Kutcher looking very striped and slightly Where’s Waldo-y on set. How do you feel about Kutcher’s tech-mogul makeover? Weigh in below in the comments. 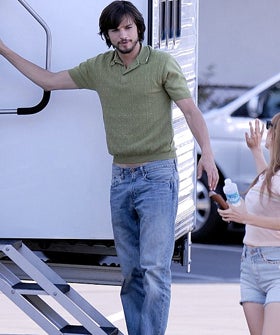 Photo: Via The Daily Mail