Skip navigation!
Story from Fashion
Photo: Tim Graham Photo Library/Getty Images.
Welcome to Refinery29’s So, How Is It Really? where we take a look at all of the topics that have the internet talking. In studying them up close, we answer the question of what it’s really like to try out a trend like a tie, a viral product, or an unexpected TikTok hack.
I’ve never paid much attention to ties. On men, I always preferred the look of a bow tie rather than a necktie, which I long considered to be just a swinging accessory that added little to an outfit, and made me discourage any partner from wearing one. Yet, somehow, I found myself attracted to a look from Louis Vuitton’s fall 2022 collection that included a striped necktie, paired with an oversized bomber jacket, and — as many fashion fans can relate — was unable to stop thinking about sporting one come September.
Advertisement
Photo: Courtesy of Ralph Lauren.
Ralph Lauren fall 2022.
Photo: Courtesy of Louis Vuitton.
Louis Vuitton fall 2022.
Neckties on women are nothing new. Its history on the female body dates as far back as the 19th century. Figures like the French author Amantine Dupin, who wrote under the pen name George Sand, sported the necktie to subvert ideals of femininity, while the “Gibson Girl” look became popular in the early 1900s, thanks to the depictions of artist Charles Dana Gibson, who drew women wearing neckties. The necktie also became a symbol of the suffrage movement in the 20th century, with women sporting the accessory to mimic masculine styles as they entered white collar jobs. According to the National Museum of American History, wearing feminine styles to the office “would suggest you were there to catch a husband, not do a serious job.” By the 1980s and 1990s, it became a staple of celebrities like Princess Diana and Diane Keaton, who sported ties with button-down shirts and high-waisted pants regularly. Later in the Y2K era, others, like Avril Lavigne and Britney Spears, reworked it from business attire to pop culture subversion, pairing the accessory with baggy jeans, mini skirts, and white tank tops.
Photo: Scott Gries/Getty Images.
I first attempted a necktie around that era, when the Mexican telenovela Rebelde first premiered, showing prep school teenagers in a uniform that included mini skirts, suspenders and a necktie. While I mimicked their look constantly, the mini skirt and boots resonated with me much more than the necktie, and so I never took to it. It wasn’t until the Louis Vuitton fall 2022 collection was unveiled that I started to think maybe I just needed to find some new inspiration – and so far, there has been no shortage.
Advertisement 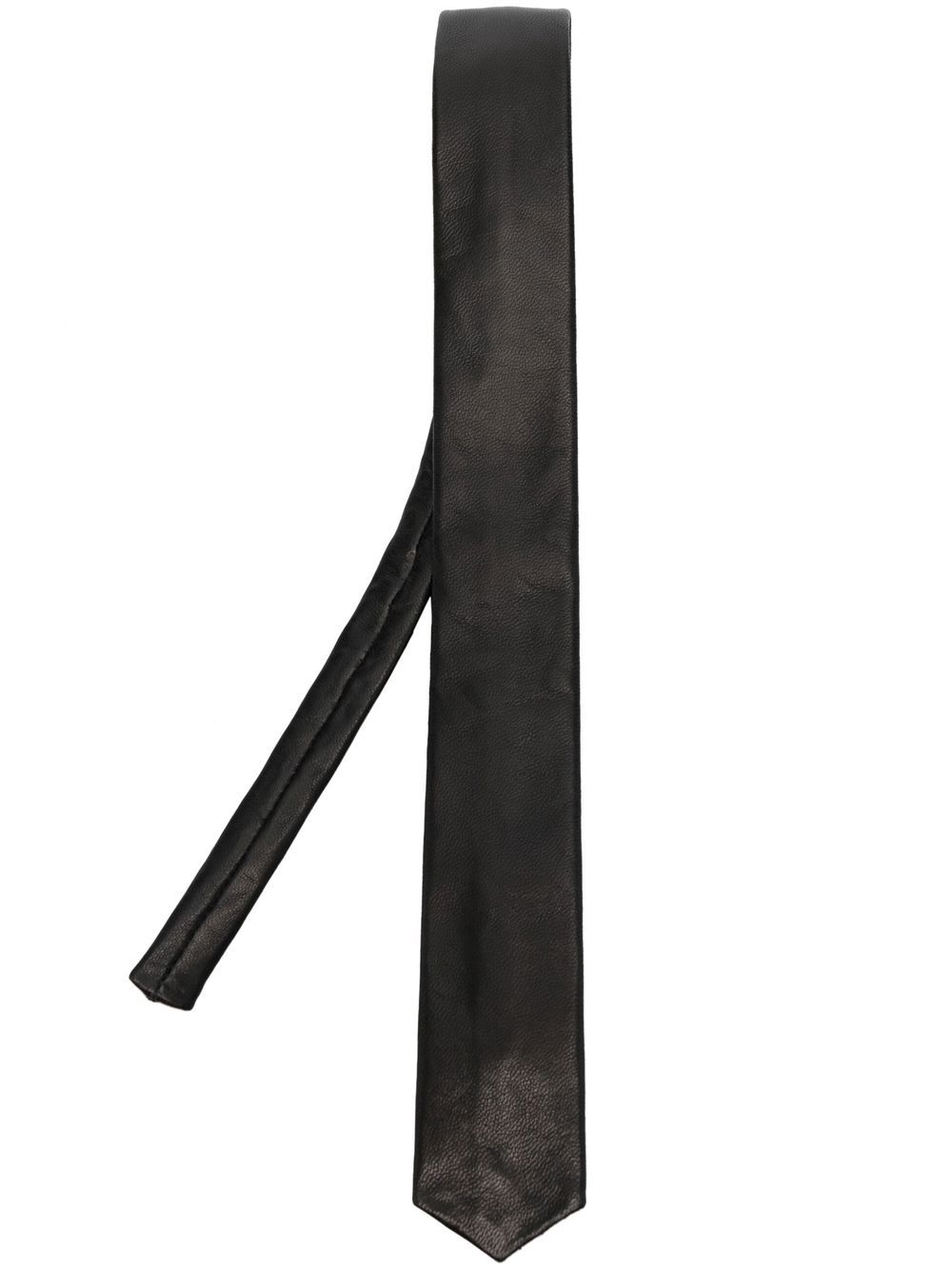 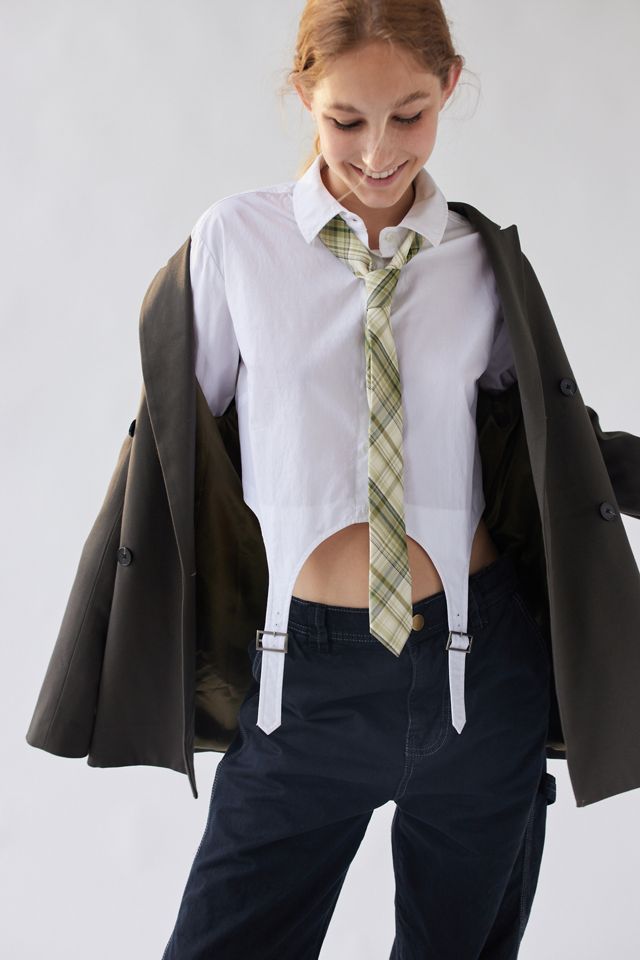 Urban Outfitters
Menswear Tie
$17.00
Urban Outfitters
Take, for example, Highsnobiety editor-in-chief Willa Bennett, who is notorious for her use of neckties (she has collected over 100 ties!), which she often pairs with white button-down shirts, blazers and loafers. Or, on the fall 2022 runways, including lineups from designers like Ralph Lauren, which featured models wearing tuxedo-like outfits with ties, as well as plaid coats with the neck accessory, or Louis Vuitton, which included an array of menswear-inspired, three-piece looks accessorized with ties that reframed them as an "it-item" for today’s youth. Thom Browne, a designer known for his impeccable, avant-garde tailoring, also showed models sporting shorts and striped ties, paired with deconstructed suiting. Spanish singer Rosalía also served as inspiration with a recent Prada look that mixed a school girl mini skirt with loafers and a black tie.
Still, the accessory looked foreign to me. Not knowing how to integrate it in my everyday wardrobe yet, I chose to try it out during a time when every fashion editor flexes their styling muscles to the extreme: New York Fashion Week.
It was the fourth day of shows, a time when I’m usually reaching for sneakers rather than a dressed-up tie. But I grabbed mine anyway — a $7 black version I got from Amazon to test drive the trend — opting to pair the accessory with a white button-down shirt dress with an asymmetrical hemline, black Mary Janes and a red shoulder bag. The dress was a good starting point to venture into this trend, given that the feminine silhouette allowed me to easily contrast two sides of my personality (and style) in one outfit.
Advertisement
And so, I walked out of the apartment. On my way to the train, I was pleasantly surprised with how powerful I felt sporting the tie, wondering if the “power suit” mentality also extended to this accessory. When I finally arrived at the show, I was showered with compliments. “I’m loving the tie,” complimented one editor. Another confessed they would now try it out after seeing my outfit. And while I still couldn’t shake the feeling that I was essentially wearing the uniform of a theater usher, I had to admit I was into it.
I still can’t tie a tie without a YouTube tutorial, but I have a new tool in my style arsenal. After a lifetime of stealing from my mom’s, ultra-feminine closet, maybe next time I visit home I can peruse my dad’s too.
At Refinery29, we’re here to help you navigate this overwhelming world of stuff. All of our market picks are independently selected and curated by the editorial team. If you buy something we link to on our site, Refinery29 may earn commission. 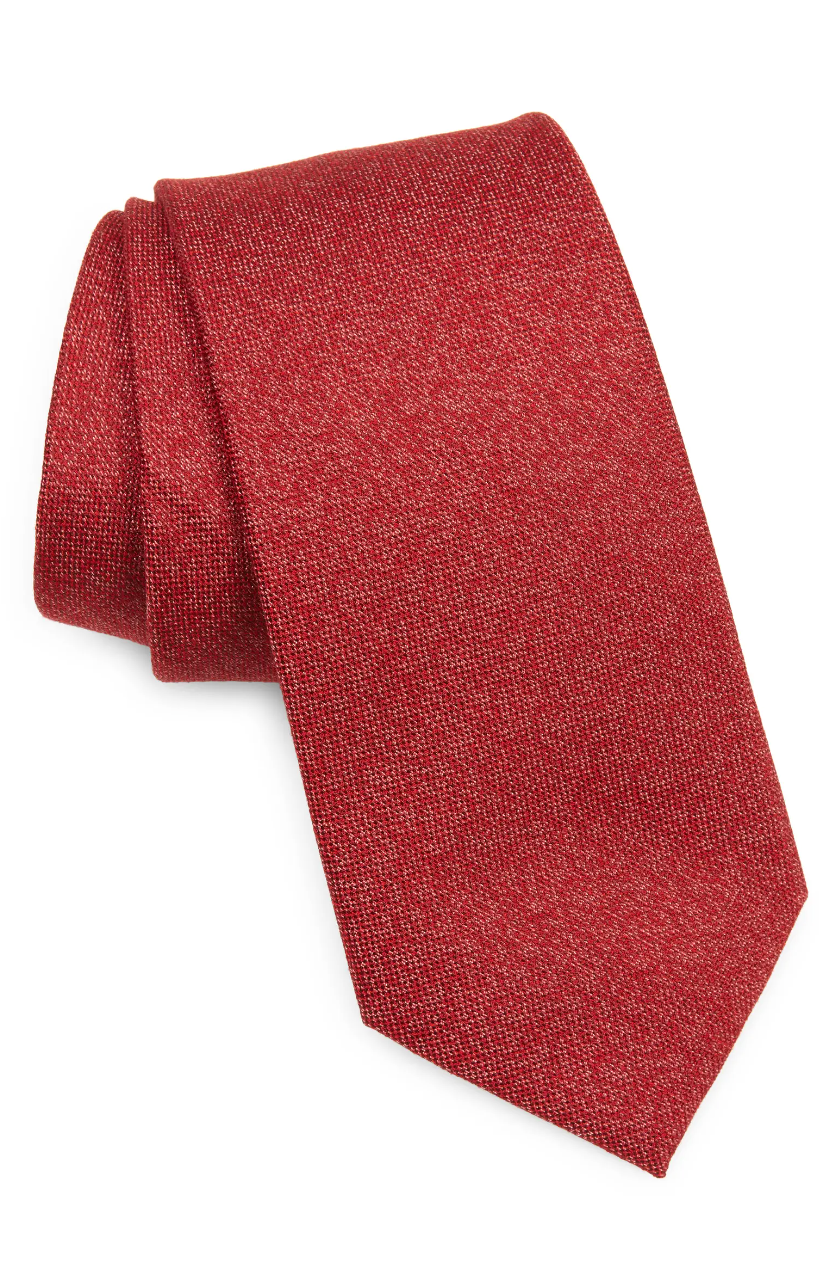 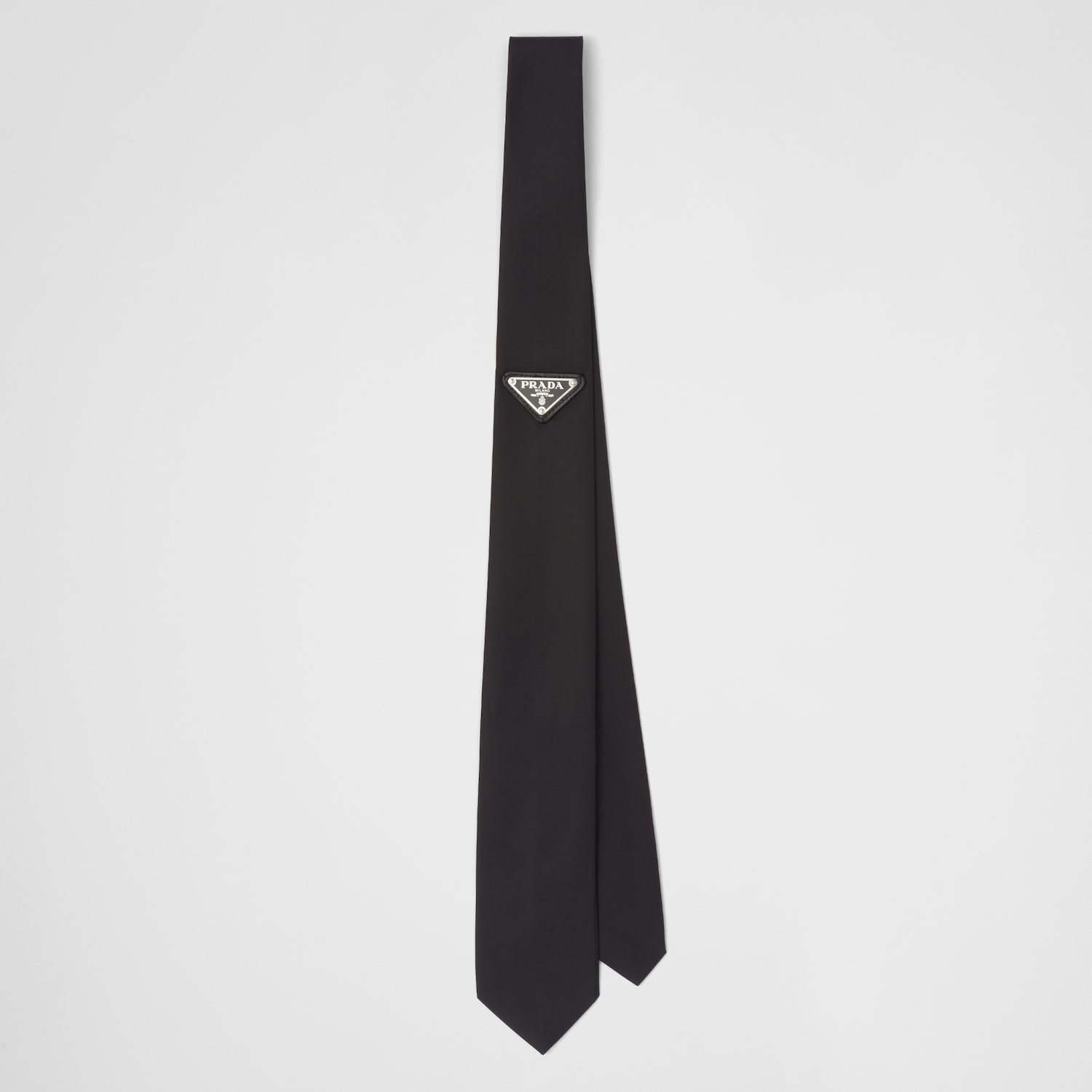 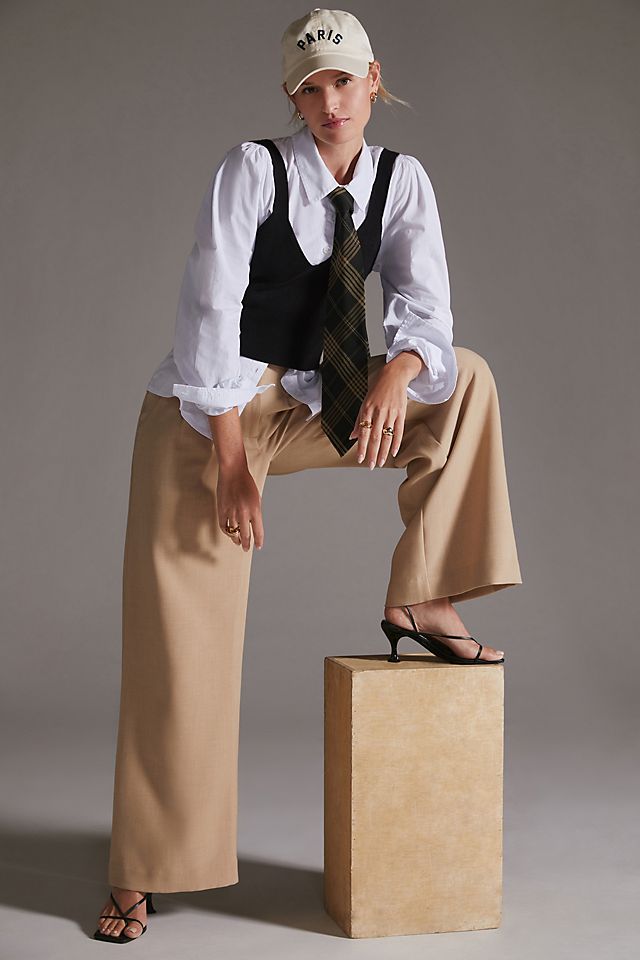 Current Air
Current Air Neck Tie
$24.00$38.00
Anthropologie
Fashion
So, How Is It Really? Fall’s Womenswear Take On Ties
Welcome to Refinery29’s So, How Is It Really? where we take a look at all of the topics that have the internet talking. In studying them up close, we ans
by Frances Solá-Sant...
Fashion
Blue Jeans, White Shirt: This Classic Combo Is A Must-Have For Fall
Ever stand in front of your jam-packed closet, staring at more than enough clothing options, and think: I have nothing to wear? Same. But perhaps the issue
by Frances Solá-Sant...
Fall Trends
Suits Are Fashion Girls’ Go-To Uniform This Fall — Here’s How To ...
It’s hard to imagine there was a time when tuxedos and suits were reserved for men. Thankfully, those outdated rules are passé in fashion and beyond. Th
by Frances Solá-Sant...
Advertisement
Fashion
So, How Is It Really? Wearing A Scarf Top In 2022
When I was growing up, scarf tops were a defining trend for cool kids. It was the early 2000s, an era when celebrities like Beyoncé and Christina Aguilera
by Frances Solá-Sant...
Unbothered
6 Black-Owned Shoe Brands You Need To Know This Summer
As I’ve been updating my wardrobe and adding in more pieces from Black-owned shops and brand collaborations with Black creatives, I realized I didn’t h
by Venesa Coger
Style
23 Spring Looks To Refresh Your Wardrobe
by Nadia Ebrahim
Dedicated Feature
4 Unbelievably Good ‘Fits That Prove The “Dad Shoe” Isn’t Going A...
Oh, the “dad shoe.” The chunky, sensible, “ugly” footwear style beloved by grill-obsessed Midwestern dads should have been the very antithesis of f
by Hilary Shepherd
Dedicated Feature
The Underrated Item That Will Pull Your Whole Outfit Together
by Eliza Dumais
Outfit Dump
20 Cozy Outfits To Get You Through November
by Frances Solá-Sant...
Style
The Long Weekend Is Almost Here. 21 Going-Out Outfits For Every O...
by Eliza Huber
Fashion
I Tried A Petite Styling Service To Solve My Dressing Problems — ...
I’m not exactly sure when but, at some point, I gave up searching for clothes in the petite section and pivoted to wearing straight-fit clothing instead.
by Alicia Lansom
Style
29 Cute & Comfy Outfits That’ll Get You Excited To Spend Va...
by Eliza Huber
Advertisement
Advertisement
Discover
R29 Stories & News
Watch
R29 Original Series & Films
Shop
R29's Most Wanted