Skip navigation!
Story from Style
Photo: The Image Direct.
If you spent the entire weekend thinking about Zoë Kravitz and Channing Tatum’s rumored relationship after the two were spotted sipping iced coffees together in New York City, you’re not alone. You’re also not the only one wondering where the High Fidelity star got her electric blue slip dress. While there’s no solid information confirming the couple, we do know where Kravitz’s dress came from. And not only is it still available, but it comes in several different colors.
Kravitz’s midi-length slip dress is from Araks, a New York-based lingerie and swimwear label. While showcasing the cyan number, the actress paired it with mustard-colored block heels, a thin gold chain necklace, and silver-tinted sunglasses. The dress, called the Cadel Slip in the color Sky, costs $330 and is still available in sizes XS to XL. It’s also in stock in a bevy of other, equally covetable colors, including fuchsia, indigo, and tan that will bring to mind Sarah Jessica Parker’s DKNY naked dress from 1997.
Advertisement
Photo: The Image Direct.
Shop This
Araks
Cadel Slip
$330.00
Araks
It comes as no surprise that Kravitz, who has long had enviable style, would be the source of this summer’s most sought-after dress, which, with the right boots and oversized cardigan, could easily transition into a fall staple. “I need Zoë Kravitz’s blue dress ASAP. This color is everything,” a user named Sierra tweeted. The founder of the Hung Up newsletter, Hunter Harris, wrote: “I found Zoë Kravitz’s blue dress so my work here is done I believe.” Another user, named Rachel, found herself in a very relatable conundrum because of Kravitz’s dress: “I lost my airpods, but I found the link to Zoë Kravitz’s blue dress.. should I buy new headphones or the dress?” she tweeted.

I lost my airpods but I found the link to Zoë kravitz’s blue dress.. should I buy new headphones or the dress

AirPods can wait. Kravitz’s dress, however, might not stay in stock for long. So, while we wait for more concrete details about Tatum and Kravitz’s relationship status, shop her slip, below. 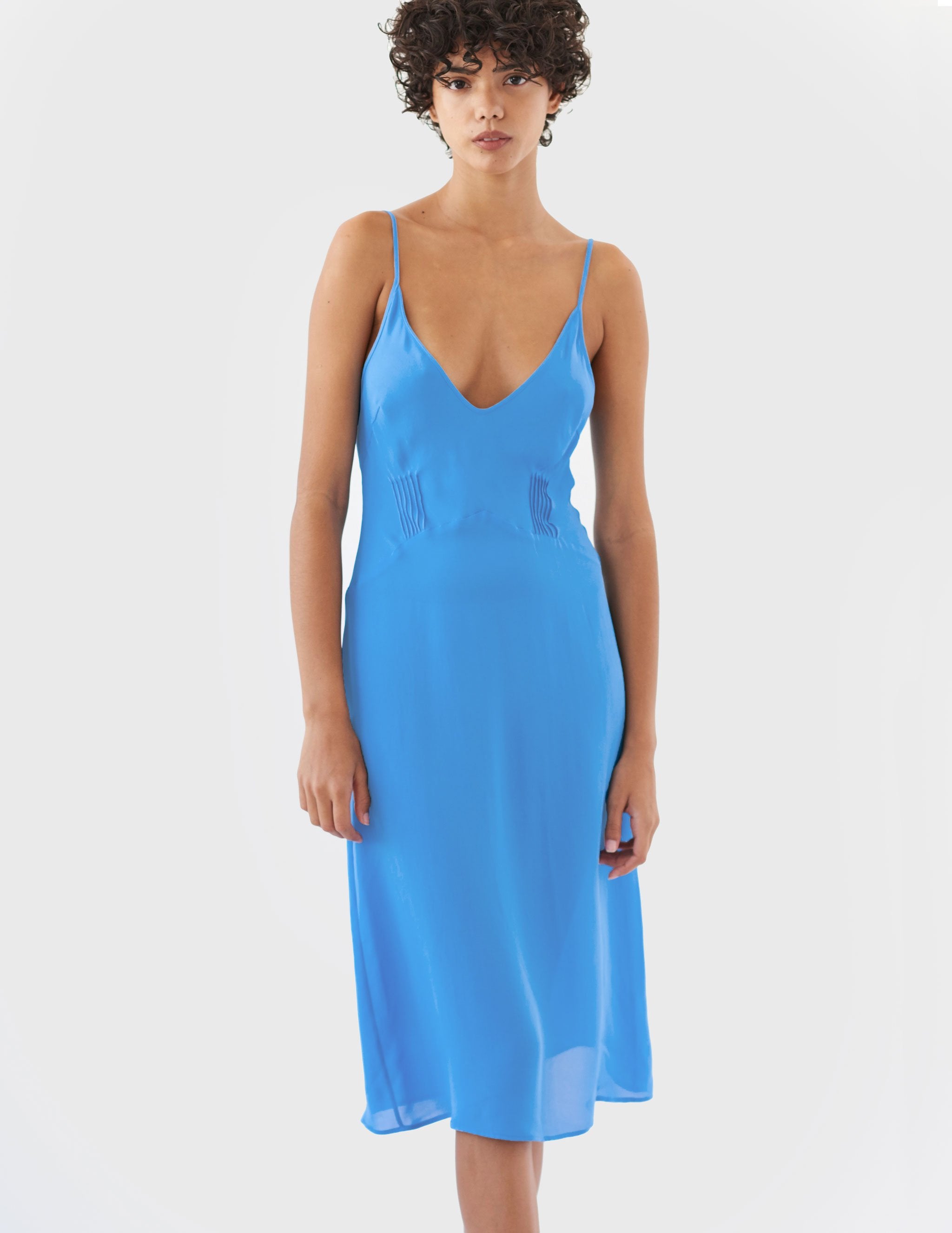 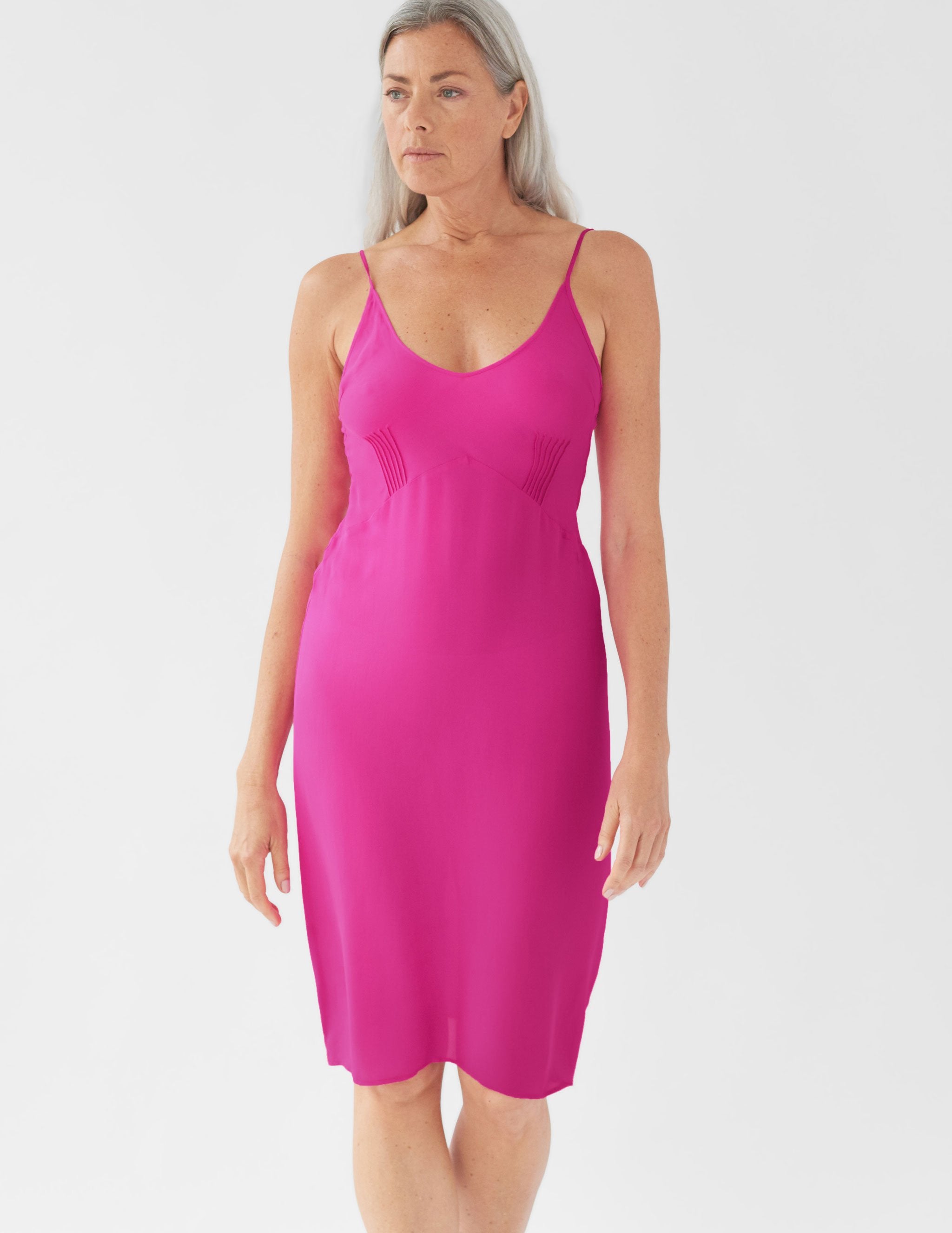 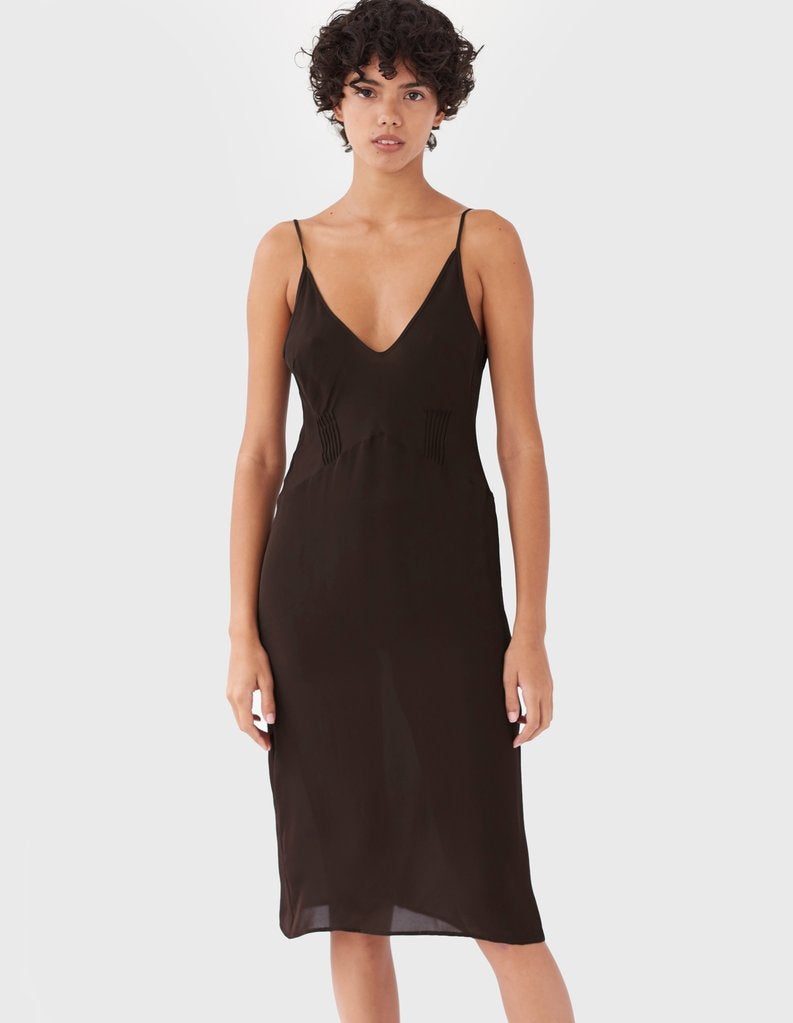 Araks
Cadel Slip
$330.00
Araks
At Refinery29, we’re here to help you navigate this overwhelming world of stuff. All of our market picks are independently selected and curated by the editorial team. If you buy something we link to on our site, Refinery29 may earn commission.
Unbothered
What Black Creators Can Learn From Signed, Blake
S
by Venesa Coger
Style
This Reformation Dress Sold Out After Taylor Swift’s TikTok Debut...
Taylor Swift made her TikTok debut on Monday in a big way. First, she announced that Red (Taylor’s Version), the re-released edition of her 2012 album Re
by Eliza Huber
Style
Zoë Kravitz Wore The Perfect Summer Dress — & Yes, It’s Still Ava...
If you spent the entire weekend thinking about Zoë Kravitz and Channing Tatum’s rumored relationship after the two were spotted sipping iced coffees tog
by Eliza Huber
Advertisement
Beyonce
Beyoncé Channeled Audrey Hepburn In A 128-Carat Diamond Necklace
One of Breakfast at Tiffany’s most memorable scenes features Holly Golightly (Audrey Hepburn) singing Henry Mancini’s “Moon River” while strumming
by Frances Solá-Sant...
Style
Katie Holmes’ Latest Look Includes A J.Lo-Approved Quarantine War...
Like us, Katie Holmes wants to dress like J.Lo. This week, the Dawson’s Creek alum was spotted strolling through downtown Manhattan, wearing a black Cham
by Eliza Huber
Engagement Rings
We Finally Caught A Glimpse Of Sophia Bush’s Square-Cut Eng...
It’s been a week since Sophia Bush made her engagement to entrepreneur Grant Hughes Instagram official. Now, she’s showing off her ring.  On Tuesd
by Frances Solá-Sant...
Style
Rihanna Wore Ripped Low-Rise Jeans With Pearls At The Supermarket
Now this is a billion-dollar look. On Sunday, Rihanna was spotted leaving her local New York City Whole Foods wearing the ultimate high-low ensemble. On th
by Eliza Huber
Style
Megan Fox Wore A Pin Top With Summer’s Most Ubiquitous Trend
With stamps of approval already pressed and sealed from Bella Hadid, Hailey Bieber, and Ariana Grande, it was only a matter of time before another celebrit
by Eliza Huber
Style
Rihanna Wore TikTok’s Favorite Going-Out Top With Low-Rise ...
Rarely does Rihanna succumb to fads, likely because she’s often the one starting them. Yet, the billionaire fashion-beauty mogul’s latest look featured
by Eliza Huber
Unbothered
Ciara On Being A Mom, A Mogul & Married To Russell Wilson: “It’s ...
As the world slowly reopens, it’s no secret that everyone has been struggling to figure out how to live in this (almost) post-pandemic reality and get ba
by Maiya Carmichael
Beyonce
Beyoncé’s Harper’s Bazaar September Cover Is A Tribute To ...
Less than a week after releasing a cowboy-inspired campaign for her athleisure line Ivy Park, Beyoncé now graces the three cover versions of Harper’s Ba
by Frances Solá-Sant...
Celebrity Style
Meghan Markle Wore The Perfect Work-From-Home Outfit
Meghan Markle seems to have a solution to the work-from-home outfit struggle we’ve all endured for the past year.  On Wednesday, the Duchess of Suss
by Frances Solá-Sant...
Advertisement
Advertisement
Discover
R29 Stories & News
Watch
R29 Original Series & Films
Shop
R29's Most Wanted