Skip navigation!
Story from Most Wanted
Let's play a little game — name a Sunday Riley product. Now, if you're thinking "Good Genes," then congrats! You've successfully identified one of the brand's top-selling items of all time.
Here's another piece of beauty history you may not have aware of: Back in 2018, Sunday Riley quietly launched a second version of the popular exfoliating treatment, this time with glycolic acid instead of lactic acid – this, in response to then-newly-passed regulation in the European Union that limited the amount of lactic acid that can be formulated into over-the-counter skin-care products.
You may not have even realized that the Good Genes had a fraternal twin, but now, it's front-and-center thanks to an exclusive launch today at Dermstore. "The success of the product in the European market really made us take notice and realize that this is a product that we wanted to offer to our US audience as well," Sunday Riley (the person) exclusively tells Refinery29. "Dermstore has a very skincare-savvy client base that knows and loves Good Genes, and [they] were actively asking about the glycolic version."
Advertisement
As for which one is better for your skin? Well, it depends. Both are forms of alpha-hydroxy acids (AHAs) but can have drastically different effects. "Glycolic acid is a smaller molecule than lactic acid, meaning it can penetrate deeper into the skin," says Riley. "That can make it more aggressive than its gentler sister, lactic acid, but [glycolic acid] also been studied repeatedly for its beneficial properties for acne-prone skin." Additionally, the glycolic version of Good Genes has a slightly higher concentration of acid in it than the lactic version, so that's something to take note of if you've got sensitive skin. (As someone with oily, acne-prone skin that gets easily irritated, I generally prefer the lactic acid formulation. That said, the glycolic one has a very similar creamy texture, but with a more noticeable tingling sensation.) 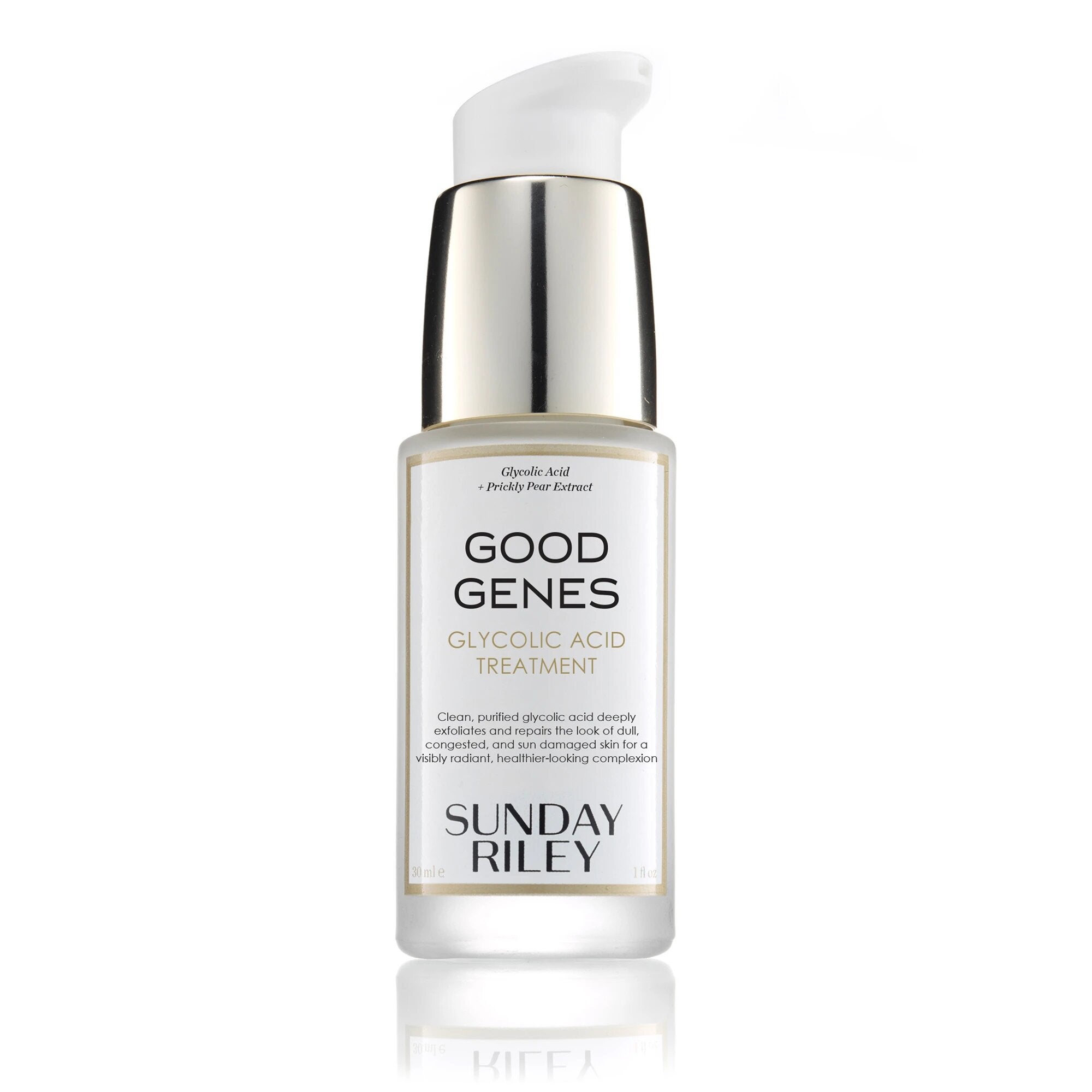 Sunday Riley
Good Genes Glycolic Acid Treatment
$85.00
In terms of pricing, you may remember that Good Genes saw a price decrease of $20 at the beginning of the year, well, the lower pricing will be the same for the glycolic formulation's relaunch as well. "Reducing the price of Good Genes has been a passion of mine for a while," Riley explains. "The $105 price tag for Good Genes was set 10 years ago, and I felt it was outdated and that we could do better for our clients. I wanted to make the pricing as accessible for Europeans as it is in the US."
Too much of a good (genes) thing? Not possible.
At Refinery29, we’re here to help you navigate this overwhelming world of stuff. All of our market picks are independently selected and curated by the editorial team. The product details reflect the price and availability at the time of publication. If you buy something we link to on our site, Refinery29 may earn commission.
Advertisement

Beauty
7 Non-Scary Bikini Trimmers To Try At Home For Smooth Skin
by Karina Hoshikawa
Beauty
We Tried Every Product From Sunday Riley — Here's What We Thought
by Us
Skin Care
At-Home Microneedling Is Riskier Than You Think
The adage “beauty is pain” may be commonplace for anyone testing out the latest industry innovations. But it’s hard to ignore the extreme
by Rhea Cartwright
Skin Care
How Augustinus Bader Became A Cult Skin-Care Brand Overnight
The French have a reputation for hauteur, particularly (and perhaps rightfully so) when it comes to their substantial contributions to what one might consi
by Rachel Krause
Unbothered
Dermatologists Share How To Achieve Your Most Radiant Brown Girl ...
Summer evokes fantasies of bright skies and sun-kissed skin. But with many cities still  adhering to shelter in place orders, things may look a bit di
by Stephanie Long
Skin Care
How To Have The Best Bath Of Your Life
by Us
Beauty
How My Beauty Routine Is Helping Manage My Anxiety During The Pan...
Do you feel like everything has gone to shit? Don’t worry, you’re not alone. We are currently living in Unprecedented Times. The COVID-19 crisi
by Jessica Morgan
Beauty
The Sunscreens Dermatologists & Beauty Editors Really Use Every Day
They've tried them ALL — these are the best.
by Us
Beauty
18 Self Tanners With Seriously Glowing Reviews
by Karina Hoshikawa
Beauty
23 Sunscreens That Won’t Break You Out
by Us
Skin Care
8 Ways To Show Dry, Callused Feet Some Much-Needed Love
by Karina Hoshikawa
Beauty
9 Mother-Daughter Tattoos To Inspire Your Future Ink
by Samantha Sasso
Discover
R29 Stories & News
Watch
R29 Original Series & Films
Shop
R29's Most Wanted