Skip navigation!
Story from Coronavirus
For recreational puzzle enthusiasts, taking on a particularly tricky jigsaw might be associated with the most relaxing period of their year. For me, it's the puzzle I work on with my partner and his family during the week between Christmas and New Year. For others, it's the project they take on between sunbathing sessions during annual trips to the beach. In light of the current coronavirus pandemic that has so many stressed out and stuck inside, though, the soothing act of putting together a puzzle is finding its way into daily routines. Kaylin Marcotte, founder and CEO of Jiggy, a millennial-focused direct-to-consumer puzzle company that focuses on featuring the work of female artists, has seen the puzzle trend take-off first hand.
Advertisement
"The demand increase was pretty much like clockwork, especially in New York," Marcotte tells Refinery29. "The weekend of March 14, 15 when people really started taking it seriously and staying home, almost immediately traffic, sales, social engagement, everything started going up." Unlike puzzle giants like Ravensburger, Jiggy is a newly established company (it launched in November 2019) which makes its experience of this pandemic-induced puzzle boom very unique.
Marcotte first got the idea to start a puzzle company about five years ago when she was working long hours at a media startup. "It was right around the time that Headspace had come out and everyone was talking about meditation," Marcotte shares. Because she was so stressed and meditation was such a hot trend, she tried it, but says, "It didn't totally land." Still, she wanted something to help her unwind after long days, so she turned to puzzles. "It clicked immediately. It truly got me off my phone and computer. There’s really no way to multitask when you’re doing a puzzle so it actually kept me present."
Before long, Marcotte was completing a 1,000-piece puzzle every week. It became her mindfulness practice of choice, but she still felt there was something missing. The art featured on the puzzles she was doing left something to be desired. "It seemed like everything, every kind of product in my life had been reinvented for me, for a millennial audience, and still the only [puzzles] out there were of like watercolor cottages and landscapes and stock photography," she explains. "So the idea planted to elevate and reinvent the jigsaw puzzle."
Advertisement
Jiggy officially launched in November of 2019, a little over four months before COVID-19 was officially declared a pandemic. Each one of the brand's puzzles features work created by a female artist, which Marcotte finds through art shows, print sites, and of course, Instagram, which has a thriving community of emerging female artists. Jiggy licenses the art and gives the artists a percentage of every sale. "I work backward from art that I think will look good completed and will also be a good puzzling experience," the CEO says. Since Jiggy puzzles feature art you'd actually like to look at long-term, they come with puzzle glue so you can keep your masterpiece intact after finishing it.

**working from home** DYK puzzles are a perfect quarantine activity

It's no surprise that this aesthetically pleasing escape has found great success during this time of uncertainty, anxiety, and social distancing. For Marcotte, navigating this sudden extreme popularity as a new company has been interesting. After having a successful holiday season — a period when people are gifting and predictably spending time working on puzzles — Jiggy was concentrating on its 2020 plans and gearing up for Mother's Day, the next big sales moment the company had identified. Long before the May holiday, however, Jiggy's initial 2020 plans were turned on their head and it began selling out of a lot of its offerings. The company had to rush back into production with new projected sales numbers, restock, and put a rush on the next collection of designs it had in the pipeline. These are all steps you’d expect any company to take when faced with a sudden boost in sales, but Jiggy's art- and artist-focused mission also came into play as Marcotte and her team were trying to figure out how to ride the quarantine wave.
Advertisement
"One silver lining is that saying, 'necessity is the mother of invention.' It added these constraints that we've had to get creative with," Marcotte tells us. "One thing that I'm actually really excited about that we're doing is partnering with our community of artists, influencers, and New Yorkers that we love and admire to create a series of limited edition and one-of-a-kind puzzles." Jiggy was able to get blank white, pre-cut puzzles quickly, which are now being shipped to those artists completed and flat, so that the artists can draw on the puzzles directly by hand. Once the artists have finished drawing, the one-of-a-kind puzzles will be auctioned off. "Galleries are closed and exhibitions are canceled, so artists are really in a tough spot right now. We're splitting the proceeds with them, supporting their work, and donating our portions to the New York COVID-19 relief fund," the founder says. This was an idea she'd had in the back of her mind for a while, but when puzzles started selling out, Marcotte put the idea into action sooner than she ever expected.

A puzzle ode to NYC 🗽🧩⁣ As a New York based startup (hi from day 21 in my Brooklyn apartment) we’re so grateful and proud and heartbroken for our city right now. We’ll continue to do our part and stay home, support local businesses and our artist partners, donate to front line workers and spread small moments of puzzle joy 🙏. ⁣ ⁣ 📷 by @zandonovan (thank you!)

While this puzzle-filled period is particularly exhilarating for Jiggy, the CEO says the puzzle trend had already begun to build. She points out that the adult coloring book craze and the rise of wine-and-paint nights showed there's been an appetite for creative analog activities for some time. Still, Marcotte admits the popularity of those activities, as well as enthusiasm for puzzles, were, for the most part, coming from artistic people who already like DIY projects. "I think what's happened over the past month is people who have not done a puzzle in their adult life are being more open to it," she explains.
Advertisement
Marcotte says bringing the joy of puzzles to that category of people in these scary times has been "amazing." Customers have written to tell her how much the puzzles have helped them stay calm by focusing their mind as they pass endless hours while quarantined alone, allowing them to feel like they're actually doing something productive and creative. She also tells us it’s been uplifting to see all the puzzles that are being sent as gifts, a way for customers to tell their friends they're thinking about them during isolation.
Marcotte is hopeful that these people's puzzle habits will stick around even after shelter-in-place orders are lifted. "I think for people who are discovering puzzles as a tool for something, like mindfulness or quiet or family time, if it's really serving them to have a routine and it feeds them in some way, I hope that continues." That is, after all, what brought her to puzzles in the first place. 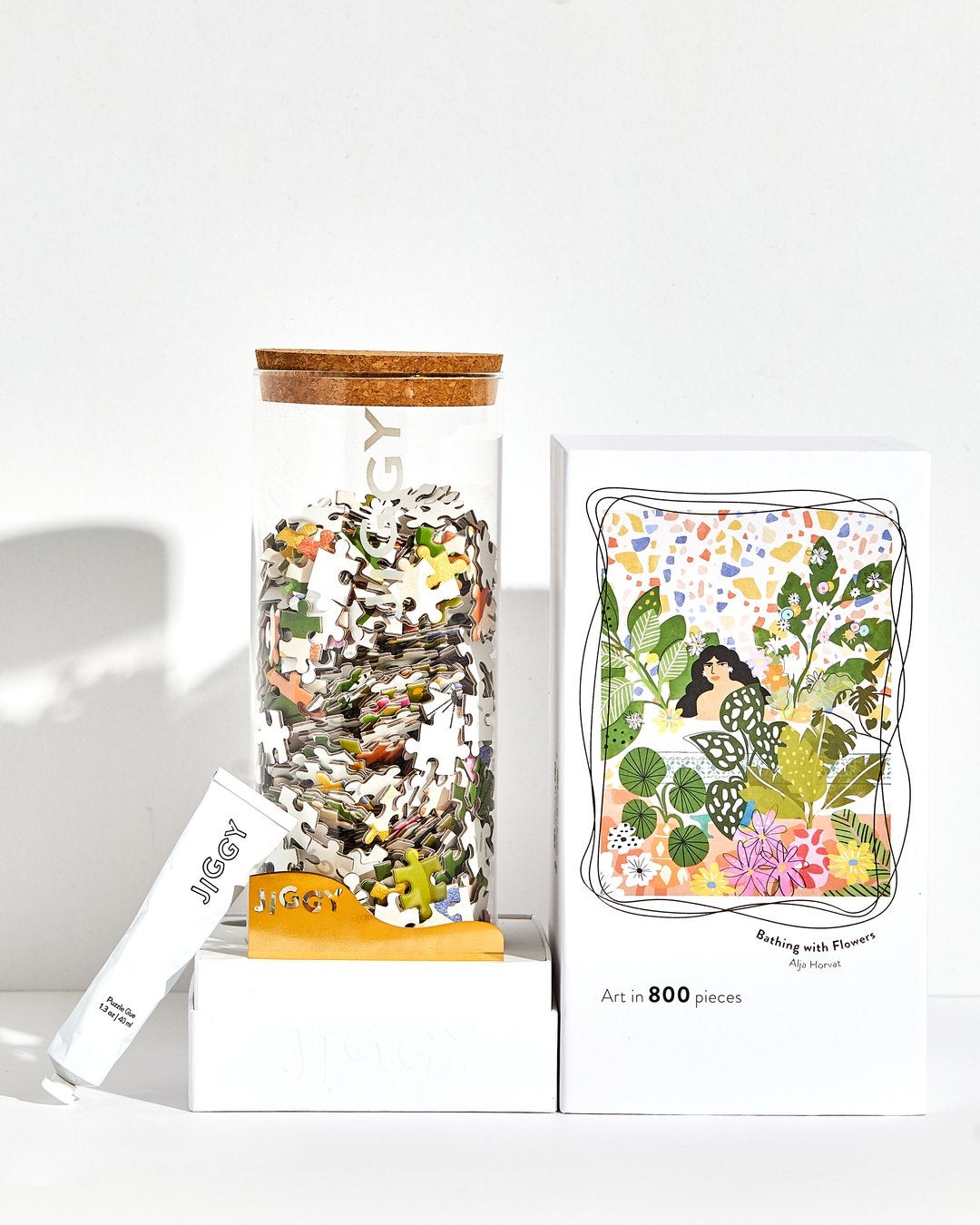 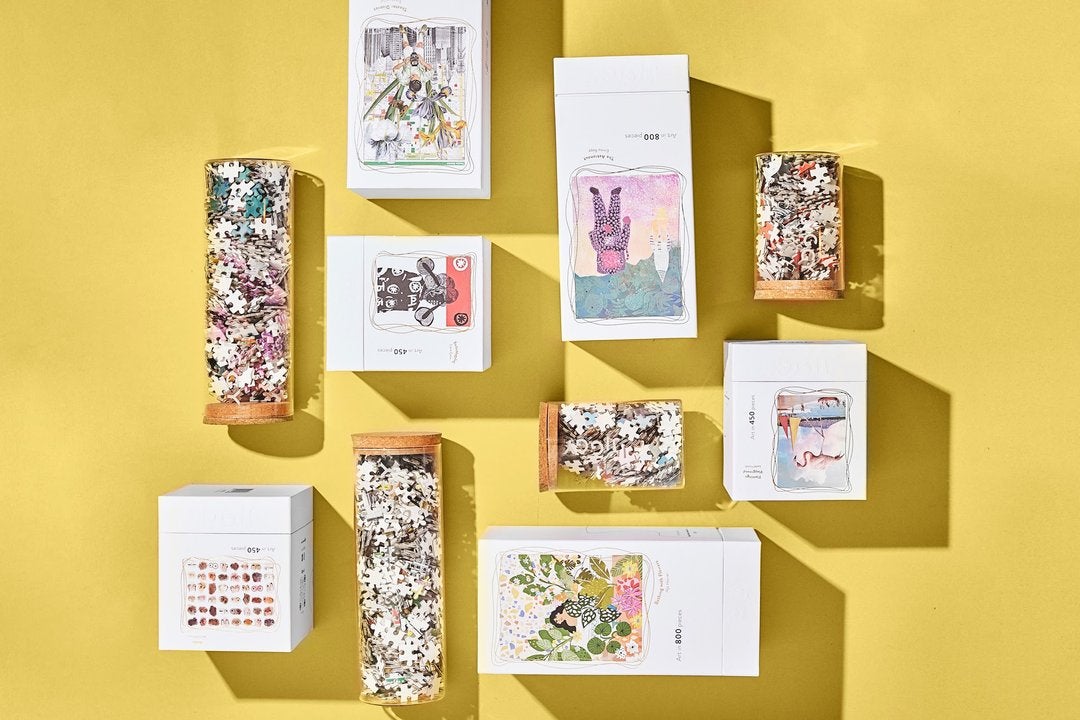 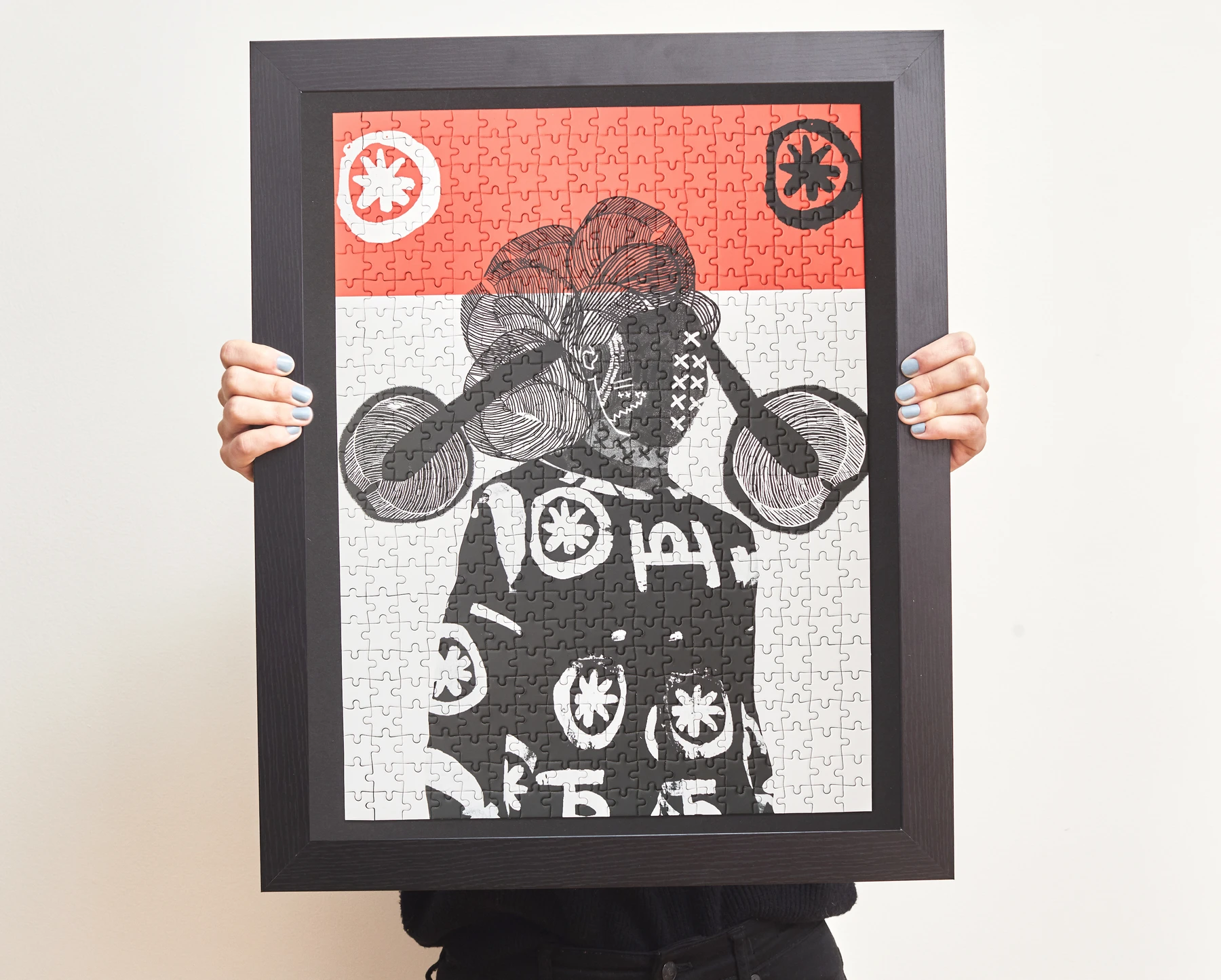 Jiggy
Berlin Magalog Puzzle
$40.00
Jiggy
Advertisement
Related Stories
The Viral Craft Behind Our WFH Masterpieces
How I Finally Became A Domestic Goddess
Expert Tips On How To DIY Tie-Dye At Home
Deals
The Best Fourth Of July Home & Furniture Sales You Can Shop Now
by Alexandra Polk
Home
The Best Affordable Loveseats — According To Small-Space Dwellers
by Elizabeth Buxton
Home
Fourth Of July Deals Are Here — Go Forth & Score A Mattress On Sale
by Amanda Randone
Advertisement
Hype Machine
The Best Portable Air Conditioners, Coolers, & Fans To Buy As Sum...
by Olivia Harrison
Home
You Can Now Officially Clean Your House With A Diptyque Candle
I never thought I’d use the word “luxury” to describe cleaning products. In fact, tidying up my apartment is one of my least luxurious ob
by Alexandra Polk
Most Wanted
Found: The Comfiest Chairs To WFH In
by Elizabeth Buxton
Deals
Here’s 20% Off A Trio Of Life-Affirming Candles
Home fragrance brand Unbothered (not to be confused with our lovely Black excellence vertical) takes scents seriously. These custom-blended soy candles not
by Alexandra Polk
Guide To Great Sleep
The Most Breathable Sheets According To Super Cool Sleepers
by Elizabeth Buxton
Hype Machine
The 11 Best Dining Chairs Reviewers Call Comfy & Cool
by Alexandra Polk
Home
Hold Onto Your Mitts: The Oven-Safe Cast-Iron Always Pan Is Back ...
The internet’s most multifunctional kitchen essential, the Always Pan, can officially handle the heat — and by heat, we mean 500 degrees Fahrenheit
by Alexandra Polk
Memorial Day
Your Guide To The Best Memorial Day Furniture Sales Of 2022
by Alexandra Polk
Memorial Day
All The Best Places To Score A Dyson On Sale This Memorial Day We...
Memorial Day weekend is almost here — and that means you can score a Dyson (or two… or three?) on sale. The brand’s devoted and loving fandom ex
by Alexandra Polk
Advertisement
Advertisement
Discover
R29 Stories & News
Watch
R29 Original Series & Films
Shop
R29's Most Wanted