Skip navigation!
Story from Beauty
Photo: Ron Galella Collection/Getty Images.
Even before the voices of Cheryl James and Sandra Denton — better known as the Salt and Pepa, respectively, from Salt-N-Pepa — belt out the words "oooh, baby, baby" from their 1987 smash hit "Push It," the song gets us hyped. In fact, the first few seconds is so recognizable, you know a dance party is about to go down — even 33 years later. It's the vibe we get from nearly every hit the iconic hip hop group put out, which is probably why they (along with former member DJ Spinderella) dominated radio waves from the late '80s well past the disbanding of the group in 2002.

Salt-N-Pepa's music was a gift that still slaps when it comes on at the right time, but their style was just as epic. As a unit, they were ahead of the curve when it came to hip hop fashion and beauty. Cropped haircuts, gold door knockers, and red lipstick became the group's DNA, making them beauty icons in their own right. Now, after decades in the industry, Salt-N-Pepa has a makeup collection with Milani to solidify their status as OGs in the beauty game.
Advertisement
The duo teamed up with the drugstore brand to release a limited-edition collection that captures the swag of the '80s and '90s with the quality of modern makeup. "When the opportunity to partner with Milani came about, it was a no-brainer," James says. As a self-proclaimed "makeup person," she was a fan of the brand before the collection came to life, which made the partnership seamless.
Together, Denton and James designed a four-piece collection, which includes two lip kits (fittingly named "Push It" and "Shoop") and face palettes shaped like CDs. Pigment and color payoff is unmatched in these products: The eyeshadow pans deliver vibrant color in one swoop while the lipstick lasts for hours. "Both of us are very infused in all parts of this collection," Denton says, who notes that her beauty look is more reserved compared to James. "I'm a matte lipstick, light makeup type of girl," Denton says. "But there's a Salt and Pepa in every friendship; this is reflective of our individual styles." 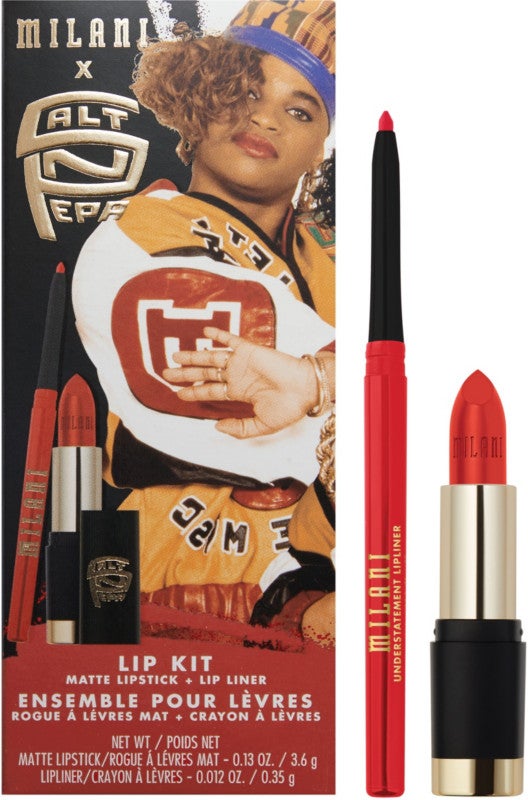 Milani
Milani Salt N' Pepa Very Necessary Eyeshad...
$19.99
Ulta
Meanwhile, James describes her style as a cross between funky and feminine. "I was not always true to myself in the early stages," she says. "But I was true to my dedication to making this [group] work. So that kept me on my journey of figuring out who I was."
“

As a grown-ass woman, I am unapologetic about who I am...

Cheryl "salt" James
”
As they've gotten older — both women are 53 — they agree that their confidence has increased. "We spent a lot of our lives apologizing for who we are and what we do," James says. "As a grown-ass woman, I am unapologetic about who I am. That attitude has grown over time, but I am confident this is where we are supposed to be right at this moment." If their epic new makeup collection is proof of anything, it's that James is absolutely right.
Advertisement
At Refinery29, we’re here to help you navigate this overwhelming world of stuff. All of our market picks are independently selected and curated by the editorial team. If you buy something we link to on our site, Refinery29 may earn commission.
Related Content:
Celebrity Beauty
Lori Harvey On The Merits Of Eye Cream & Lash Extensions
As a 26-year-old who wakes up every morning with purple hollows below my eyes, when 24-year-old model Lori Harvey tells me she can’t live without eye
by Megan Decker
Beauty
Why Do Beauty & Fashion Influencers Look The Same On My Feed?
Over the past year, many of us began to think of our hobbies outside of work. For me, it wasn’t so easy. See, I get paid to write about Victoria Beck
by Megan Decker
Beauty
Victoria Beckham’s New Blush Is (Almost) As Fun As Roller S...
Victoria Beckham keeps her ringtone on loud when she’s traveling for work. I know because, yesterday, we were sitting the same room — well, the sam
by Megan Decker
Advertisement
Beauty
Khloé Kardashian Opens Up About Her Post-COVID Hair Loss
Khloé Kardashian’s experience with COVID-19 feels like a lifetime ago. Her diagnosis was very early on in the pandemic —March of 2020 — a scary
by Megan Decker
Beauty
Sydney Sweeney Raves About The Eyelash Serum She Found On TikTok
At this point, anyone with an HBO subscription (their own or borrowed) knows Sydney Sweeney. The 24-year-old actress stars in Euphoria alongside Zendaya an
by Megan Decker
Celebrity Beauty
Ladies & Gentlemen… Kylie Jenner’s Baby-Care Line Is ...
Today, September 28th, marks the launch of Kylie Jenner’s newest business venture, Kylie Baby. The kid-friendly brand comes complete with bath-time e
by Megan Decker
Celebrity Beauty
Linda Evangelista Says CoolSculpting Left Her “Permanently ...
In an emotional post shared to Instagram late Wednesday night, legendary ’90s supermodel Linda Evangelista revealed that she filed a lawsuit against
by Rachel Krause
Beauty
Hailey Bieber Debuts A Summer Makeup Trend That’s About To ...
Summer “trends” have to be practical. It’s hot and you’re sweating, so you lean into it: throw your hair in a slicked-back low bun,
by Megan Decker
Celebrity Beauty
How MJ Rodriguez Solidified Her Beauty Icon Status At Last Night&...
by Megan Decker
Celebrity Beauty
Quannah Chasinghorse Is The Breakout Star Of Last Night’s M...
The theme of last night’s Met Gala was “In America“, and the celebrities who attended the illustrious event interpreted the prompt in eve
by Megan Decker
Beauty
The 2021 Met Gala Beauty Looks That Stole The Damn Show
by Pema Bakshi
Skin Care
Naomi Osaka’s New Skin-Care Line Was Inspired By A Sunburn
The unappealing white cast left behind after the application of a high-SPF mineral sunscreen is understandably enough to deter many people with melanated s
by Megan Decker
Advertisement
Advertisement
Discover
R29 Stories & News
Watch
R29 Original Series & Films
Shop
R29's Most Wanted