Skip navigation!
Story from Fashion
Kate Moss may possess one of the most recognizable faces in the world, but once upon a time she was just a normal — if ridiculously high-cheekboned — teen from Croydon.
We'd always thought that the iconic Corrine Day photos for The Face were the earliest fashion shots of Kate, but turns out we were wrong. David Ross was asked to shoot the 14-year-old Kate by his friend Sarah Doukas, founder of Storm Models. He shot three rolls of film just weeks after she had been scouted at an airport. Ross then forgot about the film until a few years ago, and after auctioning a couple of shots last year, the rest are about to go on display in London. The exhibition, titled Kate Moss: Roll 1, opens on October 31 at the Lawrence Alkin Gallery, and many of the photos on display have never been seen before.
Advertisement
"She was against the grain of any other look of the time. She was a cool kid and refreshing in that sense. She just had an attitude and an expression that kind of came easy, I guess", Ross told Vogue UK.
"These pictures are proof that Kate Moss holds the same mystique as Marilyn Monroe," he said. "In many ways, Kate has the sense of just knowing what she can do to people looking at her, via camera or not." Also: are we alone in digging that sweater? (Vogue UK) 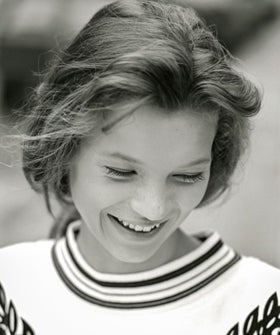 Most Wanted
Where To Shop Refinery29’s Latest Loungewear Styles
by Amanda Randone
Most Wanted
A Petite Person’s Guide To The Best Jeans For Short Legs
As a person who stands at 5’3″, I understand firsthand the struggle of finding a solid pair of jeans that doesn’t need further alteration
by Jinnie Lee
Best Bras
This Buzzy Lingerie Brand Just Launched More Inclusive Band Sizes
Odds are you’ve probably heard of Cuup, a start-up bra brand that’s risen to the peaks of Instagram notoriety in recent years for their unlined
by Chichi Offor
Advertisement
Hype Machine
The Best Black Leggings The Internet Has To Offer
by Ray Lowe
Bags
This Best-Selling Cloud-like Bag Is Back In Stock — For Now
It’s safe to say the “It” color of last year was green — from so-called “Bottega Veneta” green to sage green to Gen Z green, people
by Jinnie Lee
Deals
Anthropologie’s Up-To-70%-Off Sale Is A This-Weekend-Only E...
by Chichi Offor
Most Wanted
The TikTok Famous Binder Alternative From Girlfriend Collective A...
TikTok has become an online destination for all the need-to-know fashion tips, tricks, and hacks you weren’t expecting. Depending on your For You pag
by Mercedes Viera
Somos Latinx
5 Latinx-Owned Stationery Brands For All Your New Year Needs
How do we want our 2022 to look like? Organizade y productive sin olvidar about our self-care, of course! Whether you’re a stationary super fan or ar
by Mercedes Viera
Most Wanted
Eloquii’s Semi-Annual Sale Is Full Of Deeply Discounted Plu...
Trend forward plus-size fashion retailer Eloquii has been upping its game. The retailer regularly updates its inventory with covetable, seasonal buys at ba
by Chichi Offor
Sales
For Savvy Shoppers, A Long Weekend Means Big Savings — Here Are T...
Martin Luther King Jr. Day is this Monday. It’s the first long weekend of the year, and you know what that means for all of us shopping fans? Instead of
by Mercedes Viera
Fashion
12 Must-Have Winter Wardrobe Staples For 2022, According to Fashi...
Every season, a new selection of soon-to-be bestsellers hits our favorite fashion retailers. With so many products and trends to keep up with, it’s hard
by Irina Grechko
Fashion
16 Cashmere Sweaters For Channeling Nancy Meyers’ Movie Energy
by Jinnie Lee
Advertisement
Advertisement
Discover
R29 Stories & News
Watch
R29 Original Series & Films
Shop
R29's Most Wanted