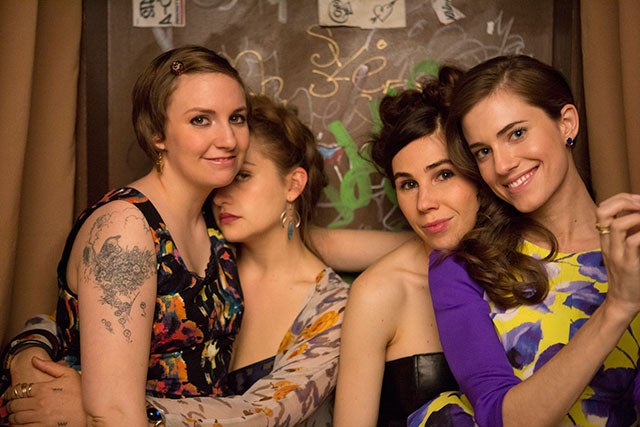 Photo: Courtesy of HBO
It's sure been a good off-season for Lena Dunham. She got photo-bombed at the Emmys (by Claire Danes, no less), she got her very own SNL spoof, and she became BFFs with Miley Cyrus (maybe). Oh, and she probably spent some time gearing up for season three of Girls. Now that all the work of filming is over, HBO has finally released the much-anticipated premiere date. The show will kick things off on Sunday, January 12, and there will be two back-to-back episodes to whet your Girls whistle. Season two ended with a whole lot of drama — breakups, makeups, legal drama, and, of course, some sex scenes — so we're sure the premiere will kick things off with a bang. Comment below to leave your prediction for Hannah and her frenemies.
Advertisement
TV Shows
The Bachelor Season 24, Episode 9 Recap: A Suite, Suite Fa...
Are you ready for the most awkward fantasy suites episode of The Bachelor ever? One in which all three contestants have to stay in the same hotel room and
by Lia Beck
TV Shows
What If It’s Actually Hannah Ann Who Leaves The Bachelor...
Everyone’s been speculating that Madison Prewett leaves The Bachelor because Peter Weber was intimate with someone else, but actually, there is anoth
by Martha Sorren
Entertainment
Does Madison Really Leave The Bachelor Like The Promos Kee...
Peter Weber may be in love with Madison Prewett on The Bachelor, but that may not be enough to keep her on the show. After Peter admitted to being intimate
by Martha Sorren
TV Shows
Bachelor Peter’s Fantasy Suite Conversation With Victoria F...
One relationship has mystified Bachelor viewers all season, but Peter Weber and Victoria Fuller’s relationship is still a thing. In fact, Peter used
by Martha Sorren
TV Shows
What To Expect From Victoria F. On The Bachelor: Women Tell Al...
Peter Weber may have accepted all of Victoria Fuller’s non-answers about their relationship all season long, but that’s not working for fans. T
by Martha Sorren
TV Shows
Everything We Know About Peter’s Impending Bachelor ...
Peter Weber’s season of The Bachelor has been nothing short of chaotic. From champagne-gate and sending Alayah home twice to Hannah Brown’s unforgettab
by Kelly Schremph
TV Shows
Don’t Count The Bachelor’s Hannah Ann Sluss Ou...
It feels relatively easy to predict the next Bachelorette this season, only because there are so few people who seem to be in contention for the spot. Hann
by Martha Sorren
TV Shows
What The Heck Is This New Bachelor Show Listen To Your ...
The Bachelor franchise has already produced a number of spinoffs like The Bachelorette, Bachelor Pad, Bachelor in Paradise, and Bachelor Winter Games. Now,
by Martha Sorren
Pop Culture
Eva Mendes Gives Rare Interview About Her Family Life With Ryan G...
In the past, Eva Mendes has been notoriously private about her personal life, often choosing not to share the details of what is going on at home with the
by Ineye Komonibo
Pop Culture
Pete Davidson Opens Up About The Impact Mac Miller’s Death Had On...
Despite making you sign an NDA, Pete Davidson is an open book. He didn’t shy away from uncomfortable topics in an interview with Charlamagne Tha God.
by Kathryn Lindsay
Music
Beyoncé Opened The Kobe Bryant Memorial With A Special Performance
Today, the city of Los Angeles is celebrating the lives of Kobe and Gianna Bryant. Thousands have gathered in the Staples Center, fans and close friends of
by Ineye Komonibo
Entertainment
This Is Why You’re Missing Gwen Stefani On The Voice...
Blake Shelton will have to pick a different coach to banter with on this season of The Voice, because his superstar girlfriend’s schedule is too busy
by Sabienna Bowman
Discover
R29 Stories & News
Watch
R29 Original Series & Films
Shop
R29's Most Wanted