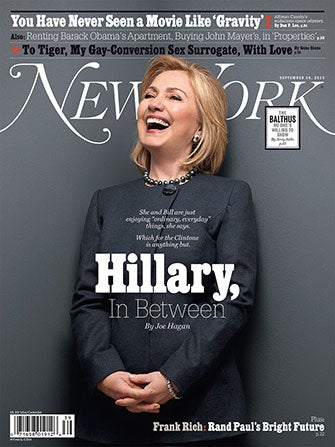 Photo: Courtesy of New York Magazine.
Not surprisingly, Hillary Clinton's first interview after stepping down as secretary of state is filled with questions. Namely, one question: Will she run for president? If you thought you'd get an answer, well, you ought to know better. Her answers are very carefully polished, and knowing that her opposition has some serious ammo against her post-Benghazi, she's clearly being very careful to walk the line before making a decision. The way we see it, this interview — with a nationally recognized but essentially local magazine — is her way of testing the waters in a safe environment. She presumably had her pick of just about any publication on Earth, but she decided to bless our fair city with a cover shot, perhaps under the assumption that liberal-leaning New Yorkers are willing to forget said ammo in favor of fawning over our most viable candidate for a female president.
Clinton has coveted a centrist image and in many ways has been successful, and in this interview she insists her strategy, in whatever position, is above partisanship. As she puts it: “It comes from both sides of the political aisle, it comes from the press. It’s all about conflict, it’s all about personality, and there are huge stakes in the policies that are being debated, and I think there’s a hunger amongst a very significant, maybe even a critical mass of Americans, clustered on the left, right, and center, to have an adult conversation about how we’re going to solve these problems … but it’s not for the fainthearted.” A very pregnant phrase, indeed. It's clear from the interviews with aides and friends that Clinton is under enormous pressure to run, and her team in particular seems to be gunning for a chance to prove their candidate's worth after 2008.
Pressure aside, for now, she's not making any decisions. But she is saying a lot of interesting things, and not just about a presidential run. She talks about the strides she took while serving as secretary of state, including more than a few moments that underscore her undeniable political ability and unique position. If nothing else, it's good to have a platform where we can hear more from her than just inconclusive responses on the "will she, won't she" questions. But that's something best said in the words of Joe Hagan and Clinton herself. It's enough to keep you clicking through to the end and still wanting more. (New York Magazine)
29Rooms
29Rooms Is Back; Here’s How To Attend Safely
Over the past year and a half, we’ve missed many opportunities to attend concerts, festivals, parties, and hangs. And although restrictions have loosened
by R29 Brand Experie...
Somos Latinx
Dear Miya Ponsetto, You Can Be Latinx & Still Be A Karen
Miya Ponsetto, the white woman dubbed as “SoHo Karen” on social media, was forcibly arrested in California yesterday. Her arrest comes after sh
by Jasely Molina
Food & Drinks
Is A Bagel Really A Bagel If It Isn’t In NYC?
by Elizabeth Buxton
Advertisement
New York
We Dig This NYC Dim Sum
by Camille Coklow
Beauty
The 17 Most Epic NYC Massages
by Kayla Jacobs
Movies
11 Movies Perfect For A Glorious Snow Day
by Vanessa Golembewski
New York
You HAVE To Try The Avocado Toast At These NYC Restaurants
by Elizabeth Buxton
New York
The Absolute Best Spots To Slurp Ramen In NYC
by Zoe Bain
New York
The NYC Rooftops You Need To Hit This Summer
by Elizabeth Buxton
Beauty
The Best Cheap Haircuts In New York City
Choppa style, for cheap.
by Liesa Goins
New York
The Indie Bride-To-Be’s Guide To Dress Shopping In NYC
by Ashley Castanos
New York
Is This Really What The NYPD Thinks About Rape?
NYPD captain Peter Rose has angered rape advocates after saying “acquaintance rape” cases are not as serious as rapes committed by strangers.DN
by Shannon Carlin
Advertisement
Advertisement
Discover
R29 Stories & News
Watch
R29 Original Series & Films
Shop
R29's Most Wanted