We get it — everyone says things they regret. But when you're Simon Doonan, people tend to remember those words, and that's where things get dicey. A few months ago, Doonan praised First Lady Michelle Obama for her ease, warmth, and beauty — but pointedly said he would never call her "chic." (To his credit, Doonan explained that, to him, "chic" implies an awareness of one's appearance that would be frowned upon in a first lady.) Naturally, the all-about-semantics dig got blown out of proportion, so in a recent interview with
The New Republic
, Doonan eats a bit of humble pie and declares that MObama is quite chic, but "not in a vain, self-involved way." Okay, point taken.

Advertisement
And here's where we all learn an important lesson in knowing when it's time to stop talking. Doonan goes on in the interview to say that "public servants aren't supposed to be wasting time indulging their vanity and their sense of fashion" — which makes us wonder if he's getting "public servants" mixed up with "members of the clergy." Because shouldn't everyone be able to express themselves in some way? Later in the interview, Doonan makes this decree: "Everyone should flaunt themselves at least once a day." Wait — everyone except public servants, right? We at R29 happen to think that style is an equal-opportunity game, and we're a bit surprised that Doonan doesn't seem to agree.
(Oh, and don't think we missed the fact that the outspoken author and Barneys ambassador says that D.C. should "definitely" embrace our image as "an unfashionable town." We're not even going to touch that one.) (The New Republic) 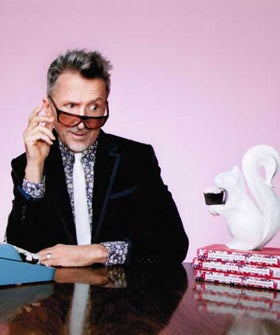 Photo: Via SimonDoonan.com/Greg Endries.
Unbothered
Claire Sulmers On What’s Next For Fashion Bomb Daily
Welcome to Fashionably Black!, a style and culture guide for Black people highlighting the cultural moments, pioneers, and conversations we’ve always bee
by Venesa Coger
Unbothered
What’s Next for Serena Williams? Fashion, Of Course
When Serena Williams announced her retirement (or as Williams prefers, her “evolution”) from tennis earlier this month, it signified the end of an epic
by Alexis Jackson
Unbothered
Savage X Fenty Debuts Loungewear Collection — With Help From G...
Last week, Savage X Fenty launched its newest loungewear collection, Xssentials, and the line is everything you’ll need this fall. From soft fabrics to b
by Venesa Coger
Advertisement
Fashion
Remi Bader’s New Revolve Launch Is Here — Why The TikTok St...
At one point or another, all shoppers experienced trying on clothing they purchased online only for it to fit nothing like they expected. TikTok star Remi
by Daisy Maldonado
Unbothered
WNBA Star Skylar Diggins-Smith’s Puma Collection Is Versatile On ...
Skylar Diggins-Smith wants you to know that she’s a hooper with style. On August 2, the six-time all-star and Phoenix Mercury Guard released her first-ev
by Venesa Coger
Unbothered
Want To Grow Your Following On Instagram? Micaéla Verrelien Share...
The misconception about being a successful influencer is that you have to tie yourself down to one specific niche in order to gain popularity. But thatR
by Venesa Coger
Fashion
Tinx Is In Her “Rich Mom Athleisure” Fashion Era — But Don’t Expe...
“Rich Moms love a monochrome moment, like a linen pant and a nice linen blouse. They love a bathing suit with a sarong over it and some amazing statement
by Irina Grechko
Unbothered
Olivia Joan Went Viral Highlighting Her Grandmother’s Fabulous Wa...
When it comes to sharing fashion content across multiple social media platforms, clothing hauls are a crowd favorite. Usually, it’s a person talking abou
by Venesa Coger
Unbothered
Rihanna Tells Us Why The IRL Savage X Fenty Experience “Wil...
When news broke that Rihanna had plans to open physical Savage X Fenty stores, many wondered what the shopping experience would be like. Its e-commerce sit
by Venesa Coger
Somos Latinx
In Celebration of Tatyana Ali’s ‘90s Fashion Looks
When The Fresh Prince of Bel-Air hit television screens on September 10, 1990, young viewers weren’t just howling with laughter at the smart humor of the
by Naydeline Mejia
Fashion
Kahlana Barfield Brown On Shopping Secondhand & Why Jeans Go With...
Style and beauty expert Kahlana Barfield Brown is an avid thrifter. If you follow her on Instagram, you know that her styling videos and fashion photos oft
by Venesa Coger
Celebrity Style
You Can Now Shop Carrie Bradshaw’s Fendi Baguette From A...
Update: Fendi has now re-issued Carrie Bradshaw’s famous purple, sequined Baguette bag, following the release of And Just Like That… on HBO Max
by Frances Solá-Sant...
Advertisement
Advertisement
Discover
R29 Stories & News
Watch
R29 Original Series & Films
Shop
R29's Most Wanted