Skip navigation!
Story from Los Angeles
Last night, Warner Bros. announced that Christian Bale will be replaced by Ben Affleck in the upcoming Man of Steel sequel. The Internet proceeded to explode, because that is what it does whenever anything happens. Truth be told, a lot of people were pretty upset about the choice. Obviously, Affleck has come back up in the ranks since Argo. Still, Bat-fans still haven't forgotten about his widely-panned performance in Daredevil. If he couldn't make that character work, does he have what it takes to fill out one of the most interesting and nuanced action heroes of all time?
Beyond just playing the role of Batman himself, Affleck has to fill Bale's shoes — no easy task. Bale had perfected the combination of sensitive, but slightly dangerous and unstable over the last three films. And, while Affleck has often played a sensitive guy, it sometimes feels disingenuous. Then again, he's played conflicted before and done a fine job. We're just not entirely convinced that he can pull off the role of the deeply moral, selfless hero, though we're ready to be pleasantly surprised. What do you think? Either way, we'll find out next summer! (Perez Hilton) 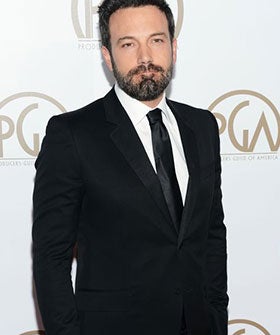