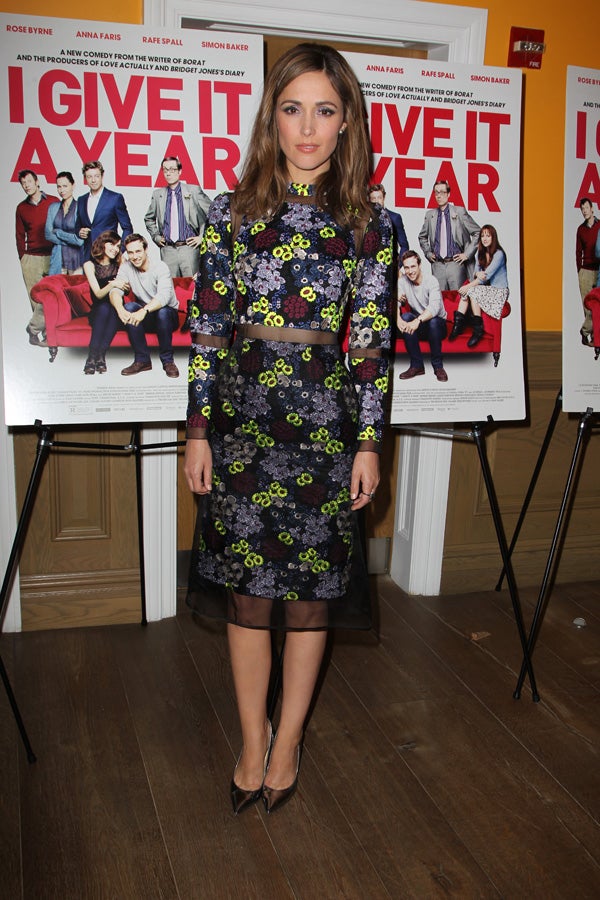 Photo: Amanda Schwab/StarTRAKS
Rose Byrne has played her fair share of comedic villains, and it's safe to say she's totally perfected that mixture of snark and wit. Whether she's portraying ruthless attorney Ellen Parsons on Damages, or Helen, the bridesmaid everyone loves to hate, she's got the act down pat. In real life, however, the Aussie beauty is anything but cunning — in fact, she's a real charmer. We caught up with her at a screening for her new off-kilter British comedy I Give It A Year, to find out how she harnesses that sarcasm, and what celebs she's got a major crush on (turns out we've got more than a little bit in common).
Advertisement

What’s the biggest difference between making a British movie and an American movie?

“Tonally, it's just different. I think it's a little broader, it's a little more...working title. Obviously all the British films have that same branding, where it's very quintessentially British. In this film, taking place in London, there's something so magical about London and I think it really evokes that sense of magic that the city has. But, being Australian is interesting, because you really assimilate to both cultures quite easily, and so that was obviously exciting for me just to do a comedy, a really English comedy.”

Your character is obviously going through a rough patch. Do you have any relationship tips that you’ve learned?

“I’m trying to think of something clever and witty to say! Make sure you do the dishes — that’s probably the best advice I can come up with.”

You had a solid career before Bridesmaids, but that film was such a blockbuster. What’s changed in your life since then?

"It was such an incredible experience to be a part of it. What's changed since then? Probably just a few more bridesmaids jokes from people, I'd say. I was in fact a bridesmaid since then, and there was a lot of 'Well, you'll know what to do,' with winks and things like that."

The characters we've seen you play all have a great amount of sass, but in real life you're very sweet. Where do you harness all of that?

"You know, when you play someone like this character from I Give It A Year, they're sort of quite unsympathetic on the page, but that's what's so fun and challenging and scary about doing the characters. It's very different for me."

If you had to pick a celebrity crush, who would it be?

Do you have any style rules you stick to?

"My rule is probably just to enlist Penny Lovell, my stylist for the red carpet. She's been working with me for a while so she's been brilliant. She's great."