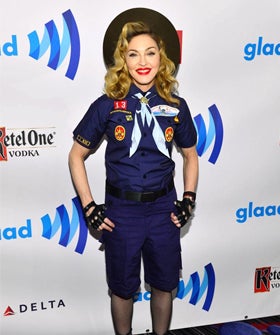 photo: via the cut
Ever wonder why and how Madonna looks like...well, Madonna? Surprise! It's not an accident. As one brave writer over at The Cut discovered, Madonna's fitness-and-diet regimen is so ridiculously impossible that it appears Madonna has fought nature for her place in the world as the original ageless goddess.

We read this article about Rebecca Harrington's 10-day journey into the dark underworld of the Madonna diet with eager, morbid curiosity. Tofu-tarter sauce? Working out alongside the
Addicted to Sweat DVD? We're hungry and tired just thinking about it.

As Harrington says, "Madonna is a feminist revolutionary, and it’s hard to be on a revolutionary’s diet. She danced in a wedding dress! She called David Mamet a chauvinist! She wrote a sex book called Sex!" Girlfriend, preach. After all, there can only be so many perfectly preserved living idols in the world. We've always been fine to just sit back and let Madonna do the hard stuff, but it's nice to know (sort of?) that we couldn't compare to Madonna even if we wanted to. (The Cut)
Celebrity Beauty
Naomi Osaka’s Braided Hairstyle Speaks Louder Than Words
“Silence is violence” has been one of the phrases painted on protest signs and written in Instagram posts following the murder of George Floyd.
by Sydney Clarke
Celebrity Beauty
Tayshia Adams Just Got Braids — & Fans Are Loving Her New Look
It was just announced that the new Bachelorette, Tayshia Adams, will present at this Sunday’s American Music Awards. Not only will fans get to see Ad
by Megan Decker
Beauty
Sophie Turner’s Tiny Wrist Tattoo Is A Sweet Tribute To Bab...
Sophie Turner recently added a new tiny tattoo to her growing collection of ink. This design is especially meaningful: a small “W” on her wrist
by Sydney Clarke
Beauty
You Have To See Demi Lovato’s New Side-Shaved Pixie Cut
This week, Demi Lovato has been serving looks. As the host of last Sunday’s People’s Choice Awards, the singer stepped on stage with platinum b
by Megan Decker
Celebrity Beauty
Bella Hadid Is Bringing Back “The Rachel” With Her Ne...
Bella Hadid is bringing us back to the late ’90s and early 2000s with her latest hairstyle, which was directly inspired by “The Rachel” ?
by Sydney Clarke
Celebrity Beauty
Dakota Johnson Ditches Her Signature Highlights For A Rich Winter...
Come fall and winter, there’s an impulse to overhaul your wardrobe, trade your light-wash denim for black jeans and a charcoal wool sweater, and lean
by Megan Decker
Celebrity Beauty
The Crown’s Emma Corrin Proudly Flashes Her Armpit...
Gracing the latest digital cover of Glamour UK, actress Emma Corrin, who stars as Princess Diana in Netflix’s The Crown, proudly poses showing off her ar
by Sarah Midkiff
Celebrity Beauty
Kate Middleton Just Lightened Her Hair With Creamy Bronde Color
Sometimes, the most impactful hair transformations are the subtle ones. Over the weekend, Kate Middleton appeared at a press event for the “Hold Stil
by Sarah Midkiff
Celebrity Beauty
Chrishell Stause Just Made A Major Hair Change — & Looks So Diffe...
Last night at the People’s Choice Awards, Selling Sunset’s Chrishell Stause debuted a brand new hairstyle complete with a fresh color and some very
by Sarah Midkiff
Beauty
Demi Lovato Stuns With Long, Blonde Hair At The People’s Ch...
At last night’s People’s Choice Awards, Demi Lovato stepped onto the red carpet with long dark waves to complement her sparkly copper jumpsuit.
by Sydney Clarke
Beauty
Jennifer Lopez Confirms Her Skin-Care Line Is Dropping Soon
If you, like most of us, have been patiently waiting for Jennifer Lopez to drop her youth-preserving skin-care secrets for years, we have good news: the da
by aimee simeon
Celebrity Beauty
Eva Mendes Shared A Graphic Photo Of Her Most Recent Skin Procedure
After decades in the industry, Eva Mendes still keeps one of the lowest profiles in Hollywood. We almost never see the actress and designer on a red carpet
by Megan Decker
Discover
R29 Stories & News
Watch
R29 Original Series & Films
Shop
R29's Most Wanted