Skip navigation!
Story from Los Angeles
What do you do when you're just coming off the end of a gigantic franchise, you've split with your longtime boyfriend, and you're no longer busy attending Fashion Week's top shows? Get a puppy, of course! Kristen Stewart knew the most direct route to our hearts is by way of cuddly cuteness, and thus had our entire office aww-ing when she stepped out with this little friend yesterday.
Though she's probably busy with her new movie, Camp X-Ray (in which she plays a new recruit sent to work at Guantanamo Bay), K.Stew found time to pick up this pup — and we wholly support that decision. We don't know his name, but we do know that we wouldn't let him out of our sight! Nor would we be able to resist carrying him around even though he is, presumably, perfectly capable of walking on his own. Quick, let's brainstorm some nicknames — to the comments! (ONTD) 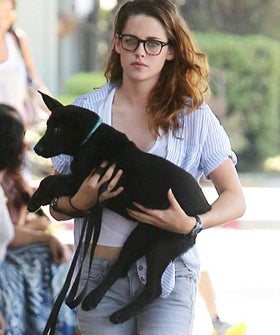