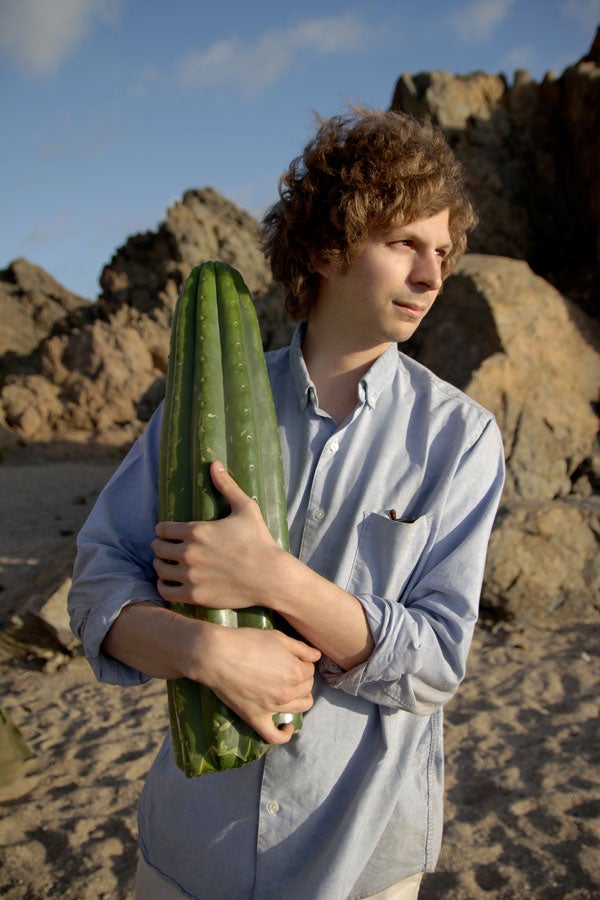 Dear Readers, we've got a spot to blow up: Michael Cera is not awkward. He isn't mumblecore, a manic pixie dream boy, or whimsical. Sure, he plays those characters and morphs into being a shoe-gazing dreamer, but he actually isn't awkward at all. In fact, he's quite charming, and when he speaks to you, he holds your gaze. He doesn't slouch, which is commendable because he is actually quite tall.
Despite his recent efforts to convince you that he's a party boy off-screen, he's almost off-puttingly polite. When he stays in Brooklyn, he tells us that he rents using Airbnb. Last time we spoke with him, he recommended a book by Charles Portis, taking our iPhone and typing in the name so we remembered. (We read it. It was a great book.)
Advertisement
So for his newest movie, Crystal Fairy & The Magical Cactus, which is about a road trip and the "magical cactus" in question happens to be mescaline, so we felt comfortable asking Cera straight up: Did he do the drug? He did, but it didn't work very well. "Maybe it was just a body high," he confesses. The drug usage in this movie may, in theory, parallel the self-parody Cera played in This Is The End (both films depict Cera as a coke-loving partier with a lack for decorum), but the meaning behind the narcotics is vastly different. In This Is The End, Cera snorts for laughs, while in Crystal Fairy, his pursuit of drugs becomes an escapist obsession. Cera plays a character we've seen before, but one with a sense of maturity that suggests his "awkward" days are long gone.

Can you recommend any more books by Charles Portis?

“I’ve read True Grit — it’s really fun, and really fast, but I think Masters of Atlantis is better. You should read anything and everything by John Fante, he’s my favorite, he’s my guy.”

Michael, after seeing This Is The End, we're wondering if drugs in movies are your thing now?

It’s funny that both of these films are coming out around the same time.

“It’s strange, yeah. We shot this is 2011, so it’s a strange coincidence that it’s coming out at the same time as another thing I’ve made.”

Well, now you’ve got a reputation as being a crazy drug fiend. We loved your appearance on Letterman. What kind of affection did he have for you?

“Avuncular. Yeah, those things are always nerve-racking. But, I'm glad you liked it. It was a lot of fun for me actually.”

Celebrity Style
What The Most Viral Celebrity Looks Say About 2023’s Fashio...
This year, celebrity fashion returned to its pre-pandemic heights: concert tours resumed, fashion weeks around the world picked up, and red carpets renewed
by Frances Solá-Sant...
Entertainment
All The Best Red Carpet Looks From The 2023 Golden Globes
by Millie Roberts
Unbothered
Our Top 3 Looks From Rihanna’s Savage X Fenty Vol. 4 Show
The fourth installment of Savage X Fenty’s epic fashion show just premiered on Prime Video, and it’s nothing short of energetic and sexy. In this show,
by Venesa Coger
Advertisement
Unbothered
I’m Showing Plus-Sized Black Women They Can Feel Empowered ...
In a sea of social media sameness, it’s incredibly refreshing to scroll through content creator and model Simi Muhumuza’s Instagram and Tik Tok pages,
by Christa Eduafo
Unbothered
Let’s Ignore Kanye West & Put Some Respect On Gabriella Karefa-Jo...
Regardless of how much of a “creative genius” Kanye West believes himself to be, one thing is crystal clear: we really need to stop making excuses for
by Venesa Coger
Unbothered
Claire Sulmers On What’s Next For The Black Fashion Industry
Welcome to Fashionably Black!, a style and culture guide for Black people highlighting the cultural moments, pioneers, and conversations we’ve always bee
by Venesa Coger
Unbothered
What’s Next for Serena Williams? Fashion, Of Course
When Serena Williams announced her retirement (or as Williams prefers, her “evolution”) from tennis earlier this month, it signified the end of an epic
by Alexis Jackson
Unbothered
Savage X Fenty Debuts Loungewear Collection — With Help From G...
Last week, Savage X Fenty launched its newest loungewear collection, Xssentials, and the line is everything you’ll need this fall. From soft fabrics to b
by Venesa Coger
Fashion
Remi Bader’s New Revolve Launch Is Here — Why The TikTok St...
At one point or another, all shoppers experienced trying on clothing they purchased online only for it to fit nothing like they expected. TikTok star Remi
by Daisy Maldonado
Unbothered
WNBA Star Skylar Diggins-Smith’s Puma Collection Is Versatile On ...
Skylar Diggins-Smith wants you to know that she’s a hooper with style. On August 2, the six-time all-star and Phoenix Mercury Guard released her first-ev
by Venesa Coger
Unbothered
Want To Grow Your Following On Instagram? Micaéla Verrelien Share...
The misconception about being a successful influencer is that you have to tie yourself down to one specific niche in order to gain popularity. But thatR
by Venesa Coger
Fashion
Tinx Is In Her “Rich Mom Athleisure” Fashion Era — But Don’t Expe...
“Rich Moms love a monochrome moment, like a linen pant and a nice linen blouse. They love a bathing suit with a sarong over it and some amazing statement
by Irina Grechko
Advertisement
Advertisement
Discover
R29 Stories & News
Watch
R29 Original Series & Films
Shop
R29's Most Wanted